Earthquake preparedness saves lives: What to do | Inquirer News MANILA, Philippines—Can earthquake drills actually help save lives and lessen casualties, especially in earthquake-prone countries such as the Philippines?

The Philippines, located at the western edge of the so-called “Pacific Ring of Fire,” is known as one of the most earthquake-prone countries in the world—experiencing at least 100 to 150 earthquakes per year, according to the Philippine Institute of Volcanology and Seismology (Phivolcs). 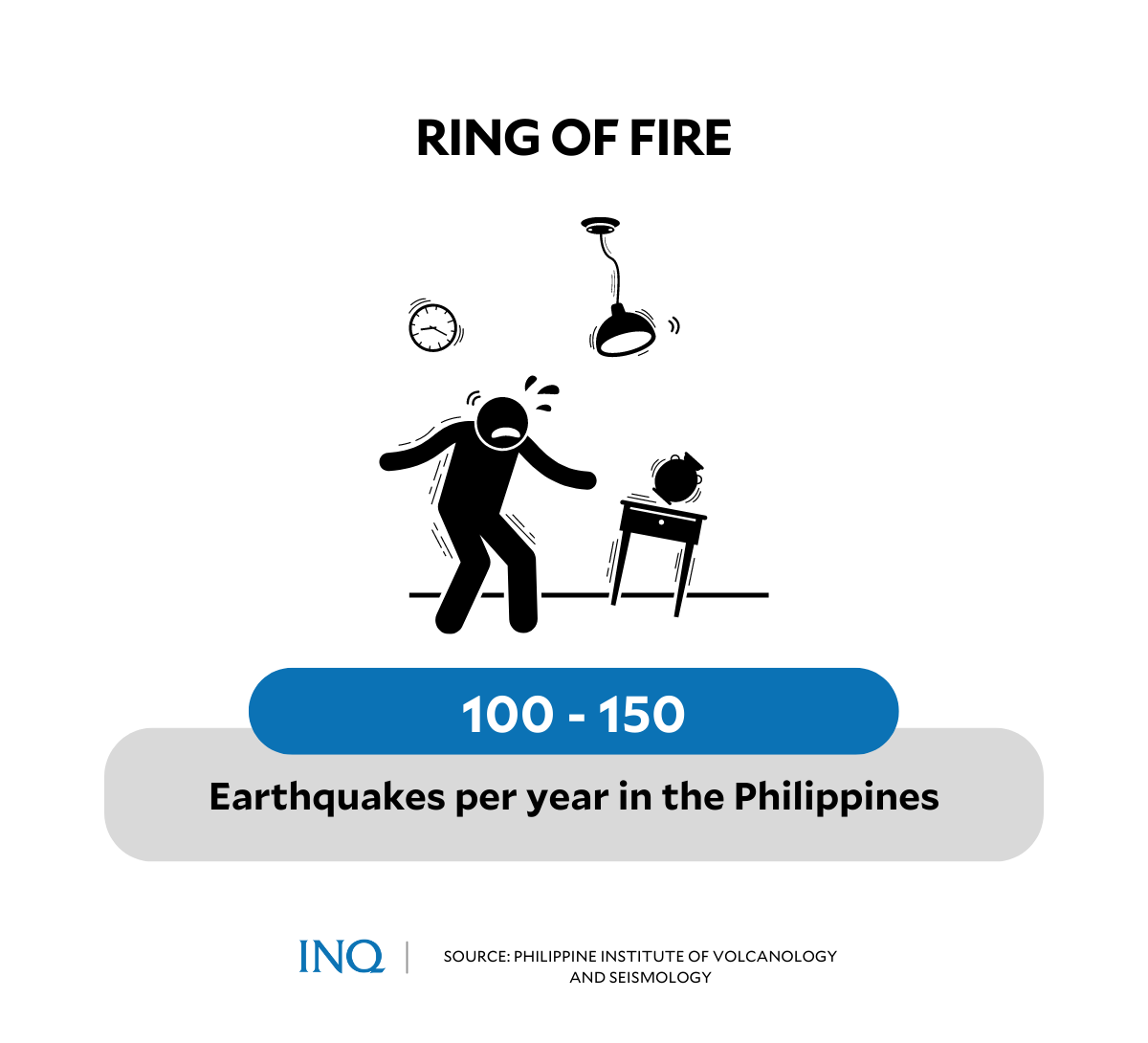 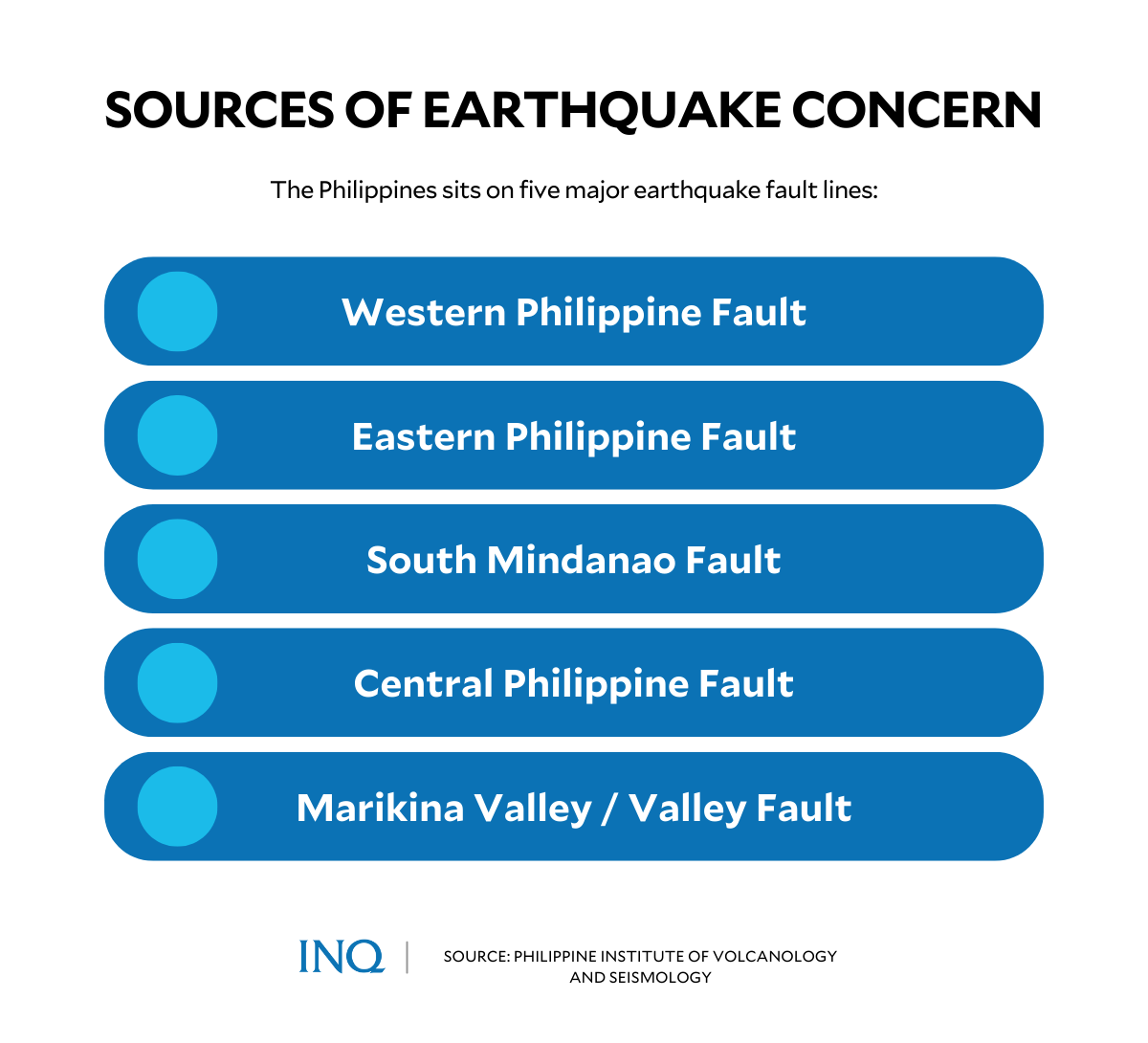 A fault line, according to Oxford Learner’s Dictionary, is “a place where there is a long break in the rock that forms the surface of the earth and where earthquakes are more likely to happen.”

In the past decade, the Philippines has been hit by 10 strong earthquakes, with magnitudes ranging from 6.1 to 7.8. These earthquakes resulted in the death of over 11,000 people, the deadliest of which was the 1976 Moro Gulf earthquake and tsunami that killed 8,000 individuals.

This week, the northern province of Abra was struck by a magnitude 7 earthquake, which resulted in strong tremors felt through Metro Manila and other parts of Luzon. According to the National Disaster Risk Reduction and Management Council (NDRRMC), the earthquake has so far killed at least 5 persons. An NDRRMC update early Friday (July 29) said the death toll has risen to six. 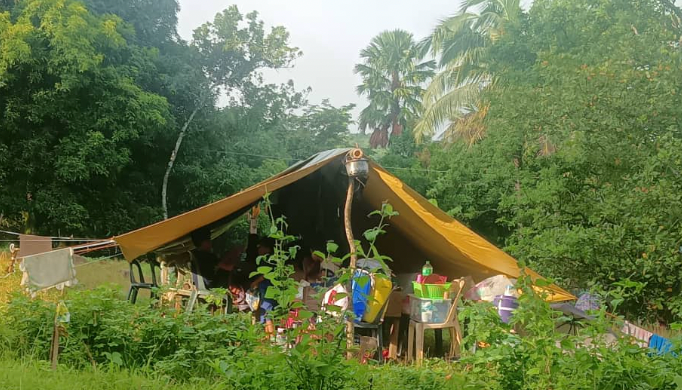 LIVING OUTSIDE. A day after the devastation caused by the earthquake, residents of Barangay Nagtipulan, Lagangilan town, Abra province shelter under a tent for fear of aftershocks. PHOTO COURTESY OF PONY OLMERO

To increase the chances of survival in the event of an earthquake, authorities, private companies, and groups conduct earthquake drills annually. But, how effective is it really in saving the lives of people amid an earthquake?

Each year, the Philippines holds simultaneous earthquake drills to help the public prepare for earthquakes—especially the “Big One,” a scenario in which a magnitude 7.2 earthquake in the Philippine capital Metro Manila is estimated to instantly kill at least 34,000 people, with 24,000 dead or dying in the rubble.

It is also expected to result in 110,000 people injured and 500 fires raging simultaneously.

READ: Are Filipinos prepared for the Big One? 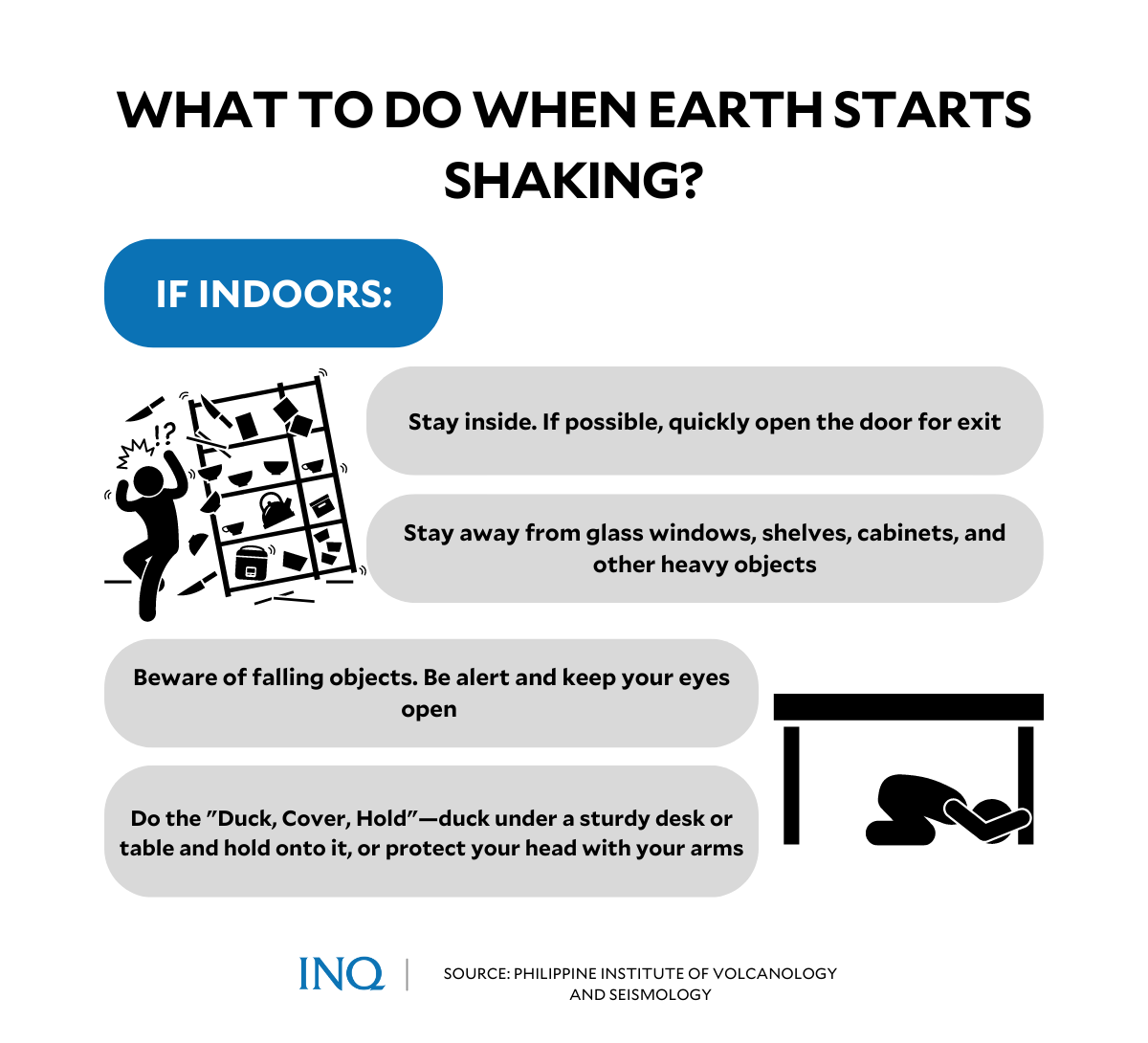 According to the Philippine Institute of Volcanology and Seismology (Phivolcs), here are the things that the public should do during an earthquake:

If a person is inside a structurally sound building or home:

According to the Earthquake Country Alliance (ECA), rescuers recommend the drop, cover, and hold on procedure since it gives a person “the best overall chance of quickly protecting yourself in an earthquake… even during quakes that cause furniture to move about rooms and in buildings that might ultimately collapse.”

“The main point is to not try to move but to immediately protect yourself as best as possible where you are. Earthquakes occur without any warning and may be so violent that you cannot run or crawl. You, therefore, will most likely be knocked to the ground where you happen to be,” said ECA.

“You will never know if the initial jolt will turn out to be the start of the big one. You should Drop, Cover, and Hold On immediately!”

Moreover, the ECA reminded the public not to get in a doorway and not to run outside.

“As with anything, practice makes perfect. To be ready to protect yourself immediately when the ground begins to shake, practice Drop, Cover, and Hold On as children do in school at least once each year,” it added. 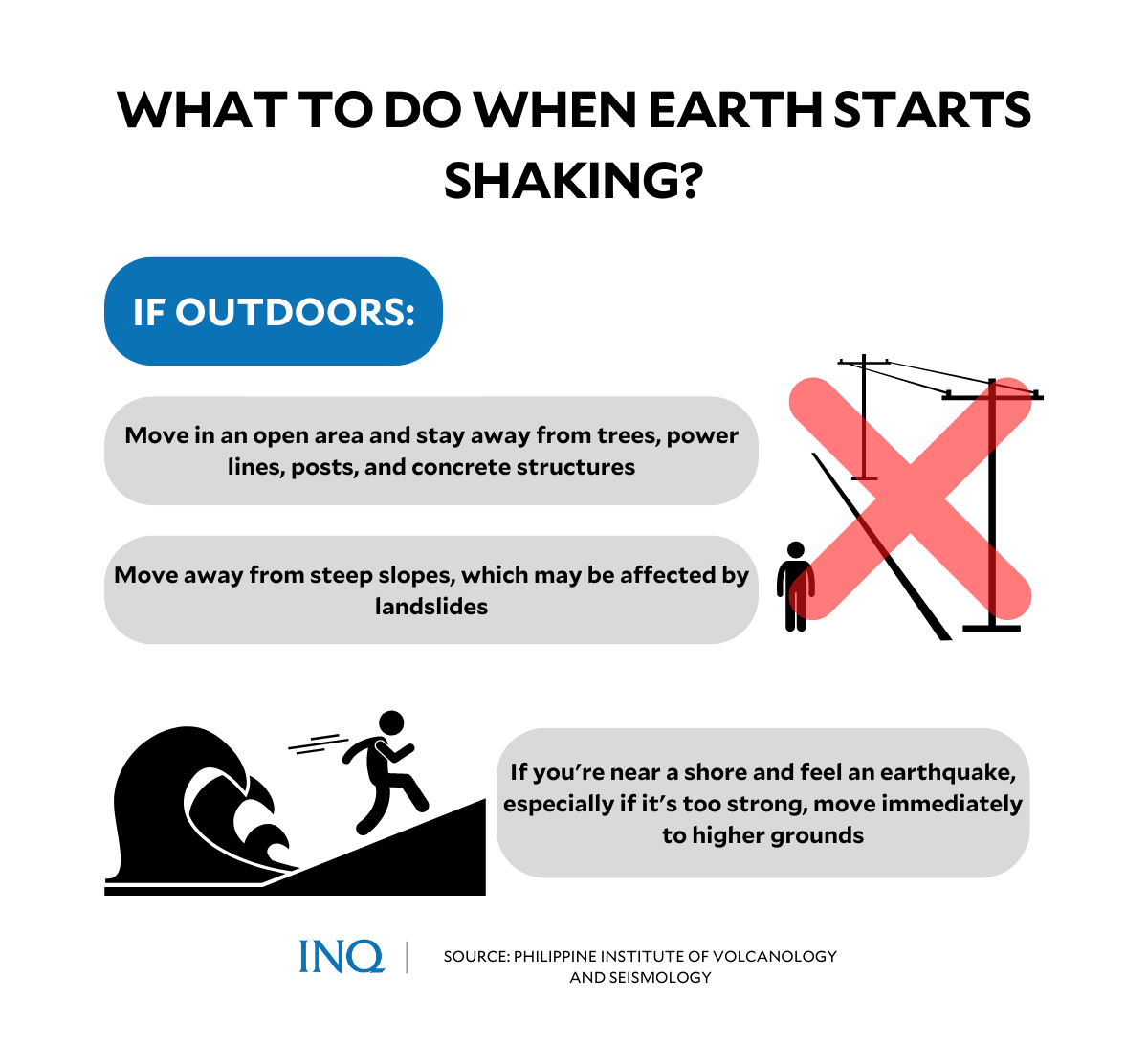 If a person is outside, Phivolcs advised to: 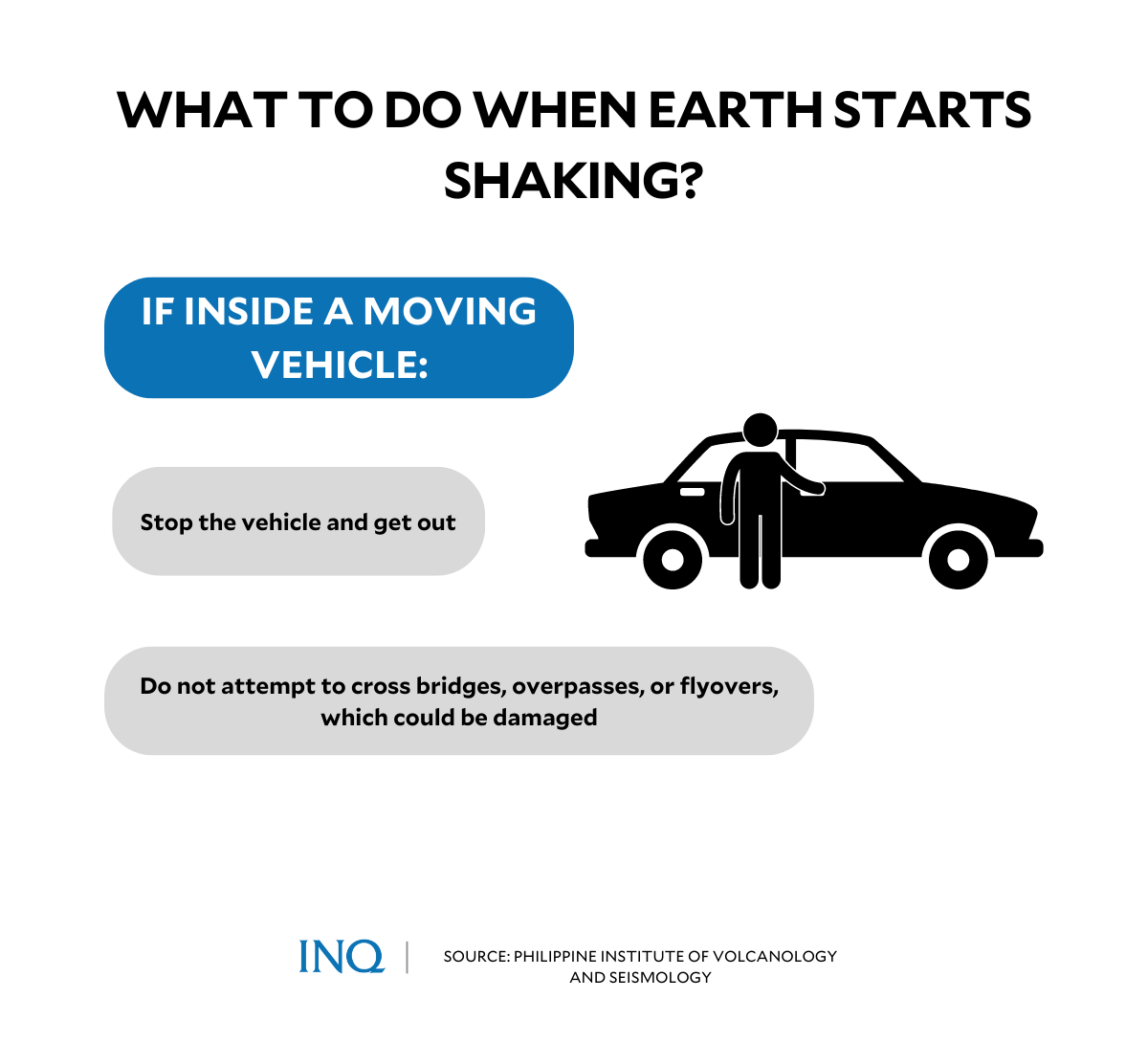 For those inside a moving vehicle when an earthquake hits:

All of these things, from the proper way to cover your head using your arms to how to properly exit a building or infrastructure after the earthquake, are taught during drills to young children in schools and adults as well.

According to Phivolcs, aside from remembering what one should do during an earthquake, the public can also plan ahead.

“The key to effective disaster prevention is planning,” said Phivolcs.

Among the ways the public can prepare for an earthquake include:

Most importantly, Phivolcs reminded the public to: 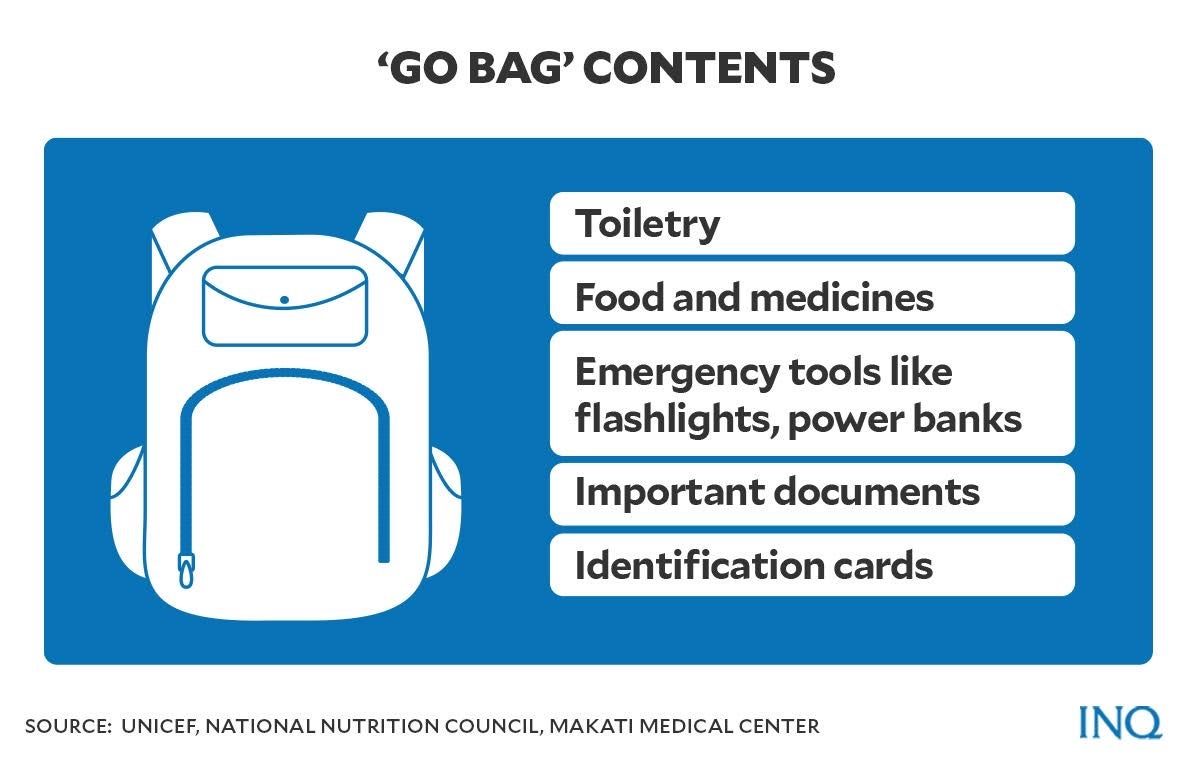 According to Unicef, emergency kits or Go Bags should include:

In a statement at the time, Mercado said the earthquake drills in public buildings held prior to the strong earthquake have kept various hospitals and other establishments “on their toes.”

He recalled the orderly conduct of doctors, nurses, and patients at the government-run Philippine General Hospital (PGH) in Manila at the height of that Luzon earthquake.

“The patients (at PGH) said that their evacuation was very orderly because they conducted a drill before the earthquake. That’s why we are requiring these drills in all hospitals and public buildings,” he said at the time.

“It is important that we move on from disaster response to disaster preparedness,” he added, emphasizing his call on schools, hospitals, and other public buildings to continue holding fire and earthquake drills.

The same observation was also noted in 2012 when twin earthquakes hit southwest China.

Based on an article published by the Beijing Times, when the earthquakes struck, 1,102 students in the Maoping Central Primary School In Yiliang county in Yunnan province moved from the teaching building to the playground within a minute.

The article said none of the students was injured or killed in the earthquake, “thanks to regular earthquake drills the schools arranged after the Wenchuan earthquake in 2008.”

In an interview last March, Phivolcs Director Renato Solidum Jr. urged the public to participate in earthquake drills to know what they need to do before, during, and after an earthquake.

“People need to help themselves as help from others will not arrive right away during large-scale earthquakes,” Solidum said.

“Participation in drills is important. This will increase the chance of people surviving a strong earthquake,” he added.

According to the Great Central U.S. ShakeOut, a multi-state drill spanning much of the central United States, taking part in earthquakes drills can help the public practice how they can react quickly and safely during an earthquake.

“You may only have seconds to protect yourself in an earthquake before strong shaking knocks you down—or drops something on you. Practicing helps you be ready to respond,” the organization behind the multi-state drill explained.

While earthquake drills have been found helpful in saving lives, a study by the Humanitarian Initiative (HHI) in 2018 found that 47.5 percent of respondents said they have not done anything to prepare themselves for a disaster in five years, and only 36 percent said they feel prepared enough.

READ: Why disaster preparedness should be part of your plan

A 2014 paper evaluating the ShakeOut earthquake drill held in a school in New Zealand found that while the majority of 8,000 participants were fully compliant with the directions and instructions, a survey showed that 37.6 percent were reluctant to participate fully in the drill.

When asked why observers or the survey respondents thought people were reluctant to drop, cover, and hold, survey results cited the following reasons:

“Who wants their colleagues to see that they can’t get under their own desk?” said Sara McBride, the United States Geological Survey social scientist who led the study.

According to studies, earthquake-related casualties occur hours after the earthquake has hit an area. Certain medical conditions, such as complications due to being crushed in rubble or collapsed buildings, are considered indirect causes of earthquake-related death and injury.

READ: Dying in an earthquake: Experts say it’s not just the tremor

According to the United States Geological Survey (USGS), it is crucial to check for injuries after an earthquake. It reminded the public:

Aside from what to do before and during an earthquake, Phivolcs also said it is important to check for the following hazards:

“If you need to evacuate your residence, leave a message stating where you are going and bring your emergency supply kit,” said Phivolcs.

“Be prepared for aftershocks. Once the shaking stops, take the fastest and safest way out of the building. Don’t use elevators, enter damaged buildings, use telephones unless necessary,” and most importantly, “don’t panic.”