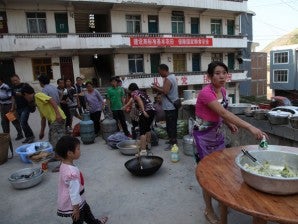 Yiliang, China – Poor farm worker Mu Xianchun escaped unhurt when the twin earthquakes hit her village in a remote area of southwest China but she faces a bleak future after what little she had was destroyed.

Like many of China’s impoverished rural workers, 46-year-old Mu had few possessions of value but even they are gone after Friday’s 5.6-magnitude quakes.

“All my freshly harvested sweetcorn has gone and all of my farming tools. This is my whole life and I have no future now,” she told AFP, standing outside a tent in the grounds of a local primary school in Yiliang county that is now her home.

“I am terrified of going into buildings now, we all are,” said Mu, who returned home after spending a morning tending to her crops to discover concrete debris where her tiny house once stood.

Mu lived in Yiliang’s Maoping village, in one of the poorly-built houses that are scattered on the banks of the winding Nanpan River in Yunnan province.

The village, squeezed in a needle-thin valley between towering cliffs, never stood a chance when the landslides came.

Straddled between the cliff face and the river is a narrow road, once the main artery of Maoping. Rocks the size of articulated lorries now lay nestled into houses.

And on the water’s edge, the twisted metal of a motorcycle juts from beneath a huge chunk of rock.

Stones still trickle down the cliffs, causing alarm among aid workers and soldiers drafted in for the rescue effort, who are watching for signs of further landslides.

But there are few residents at Maoping now, just the buckled wreckage of homes and buildings.

Some residents have taken the advice of aid workers to go to nearby shelters, but most had departed before the ambulances, army vehicles and Red Cross jeeps arrived on the scene.

“It is going to rain soon and things are going to get worse,” said one resident clutching two huge bags of possessions.

The weather is a major concern in Yiliang county. As the clouds gather above the mountain tops, the pace of the exodus appears to quicken.

Rain is expected and few are willing to stay and find out whether it will bring a second wave of destruction.

Many residents boarded coaches heading to the nearby city of Zhaotong while others left for nearby Yiliang City, which has become a safe haven for rootless, shell-shocked families.

The school grounds have been transformed into relocation centres, and so too have the civic squares of this typically run-down Yunnan community.

In one of dozens of tents erected outside the hospital of Yiliang City, a warm smile lights up the face of 40-year-old Qing Liu as he plays cards and eats instant noodles with his children.

After leaving his home when he witnessed the horror of the earthquake at first hand, he is content that he is now out of danger, with his family by his side.

“The house kept shaking and as I have four children, I couldn’t stay there any longer. We experienced the earthquake and it was terrifying,” he told AFP.

Back at the school grounds, 78-year-old Wen Yijiang, still dressed in her traditional Yunnan finery, said the mindset of local people had changed forever following the quake.

“We are all terrified. Even when people start to go back to their homes, things won’t be the same again,” she told AFP.