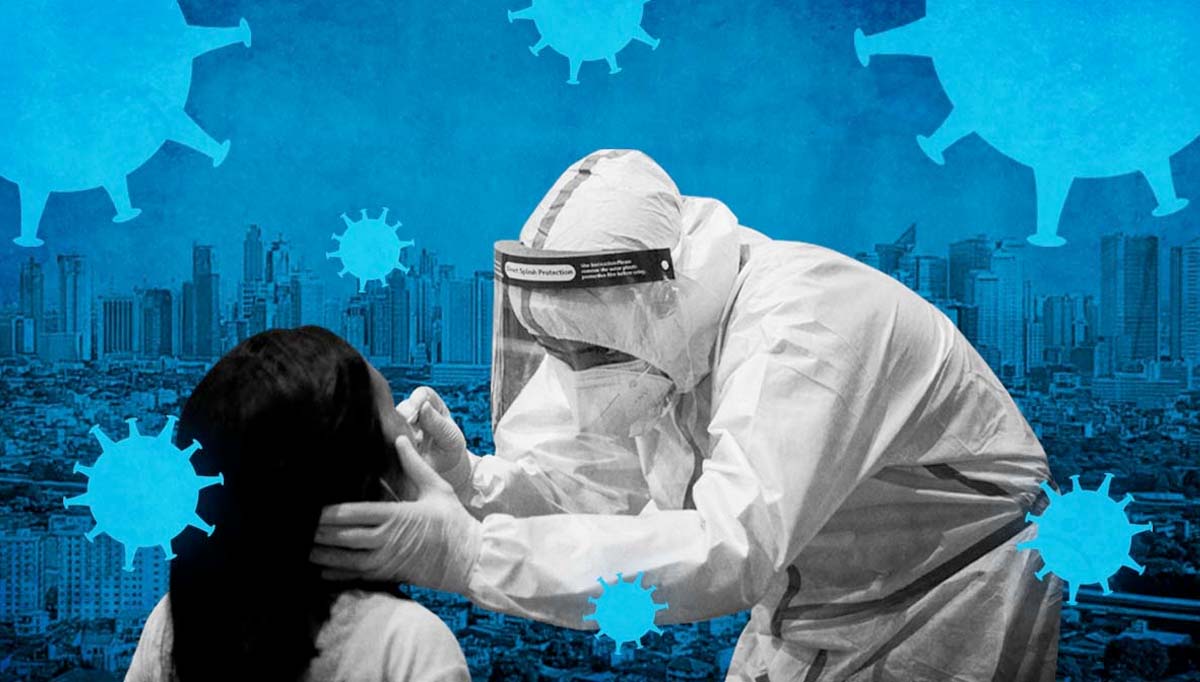 MANILA, Philippines—Over three years into the pandemic, cases of COVID-19 continue to ramp up globally as SARS-CoV-2, the virus that causes it, continues to mutate and evolve with the newest strain: BA.2.75.

Based on records by World Health Organization (WHO), BA.2.75, BA.2 sub-lineage or a sub-variant of the Omicron variant, was first documented in India in May this year and has been spreading quickly ever since.

The newly-discovered sub-variant, according to WHO, has so far been detected in 10 countries and is categorized by the WHO as a sub-variant under monitoring, along with six other Omicron sub-variants.

In this article, INQUIRER.net will provide more details about the BA.2.75 sub-variant and what makes it a global concern.

WHO: Wait and see

The newest Omicron sub-variant has so far been detected in India, Australia, Japan, Canada, the United States of America (US), Germany, the United Kingdom (UK), and most recently in the Netherlands.

In the Netherlands, the BA.2.75 sub-variant was first detected in a sample last June 26 in the region of Noordost-Gelderland, according to the Dutch National Institute of Public Health. 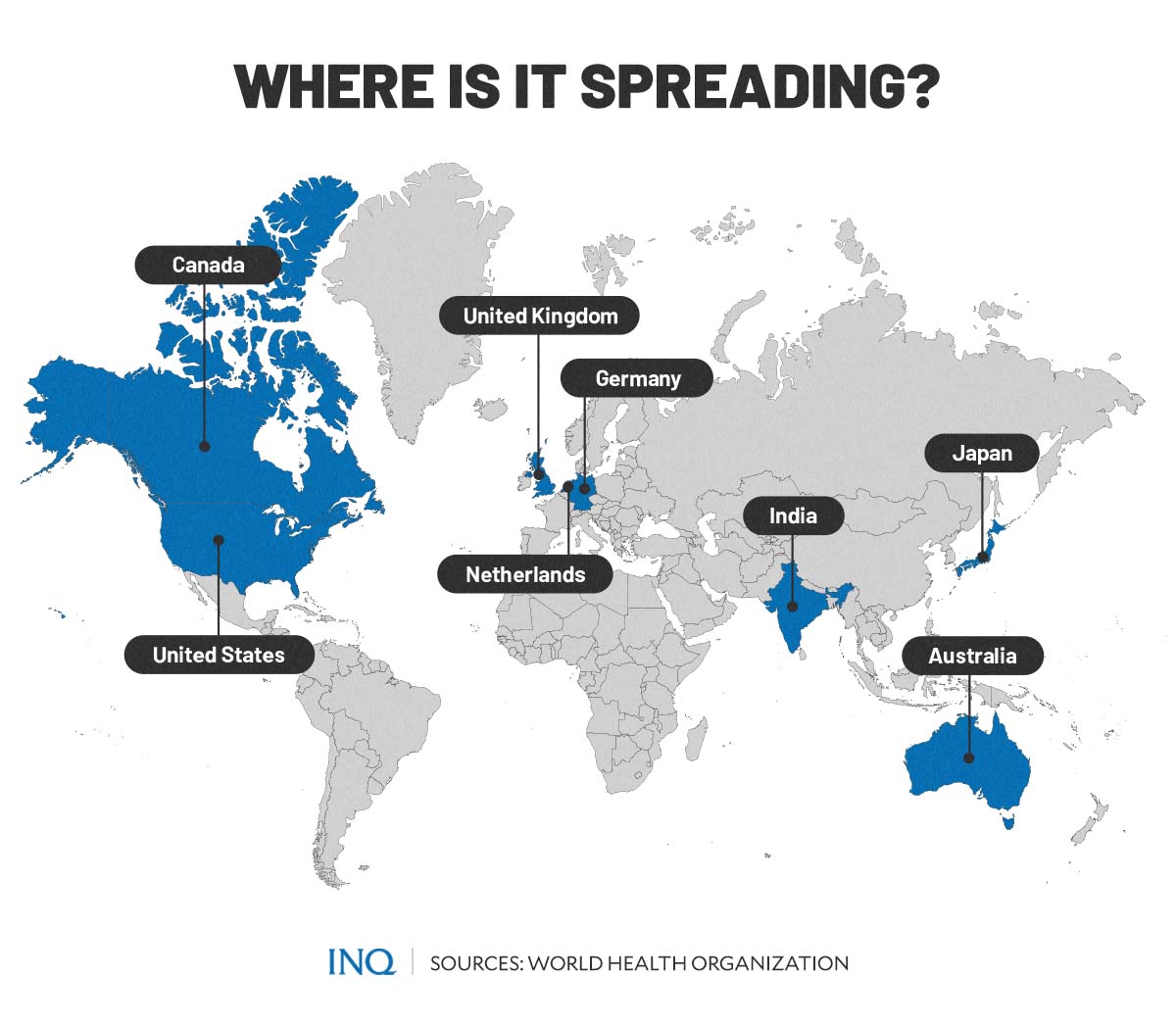 “Not much is known about BA.2.75 at this point,” the institute noted. However, it said the sub-variant “appears to more easily bypass the defenses built up against SARS-CoV-2 through small, specific changes”.

Earlier this month, WHO chief scientist Soumya Swaminathan said that the UN agency was closely monitoring the new version of Omicron, but she emphasized that “there are still limited sequences available to analyze.”

“[T]his sub-variant seems to have few mutations on the receptor binding domain of the spike protein… so we have to watch that,” said Swaminathan.

“It’s still too early to know if this sub-variant has properties of additional immune invasion or indeed of being more clinically severe. We don’t know that,” she added. 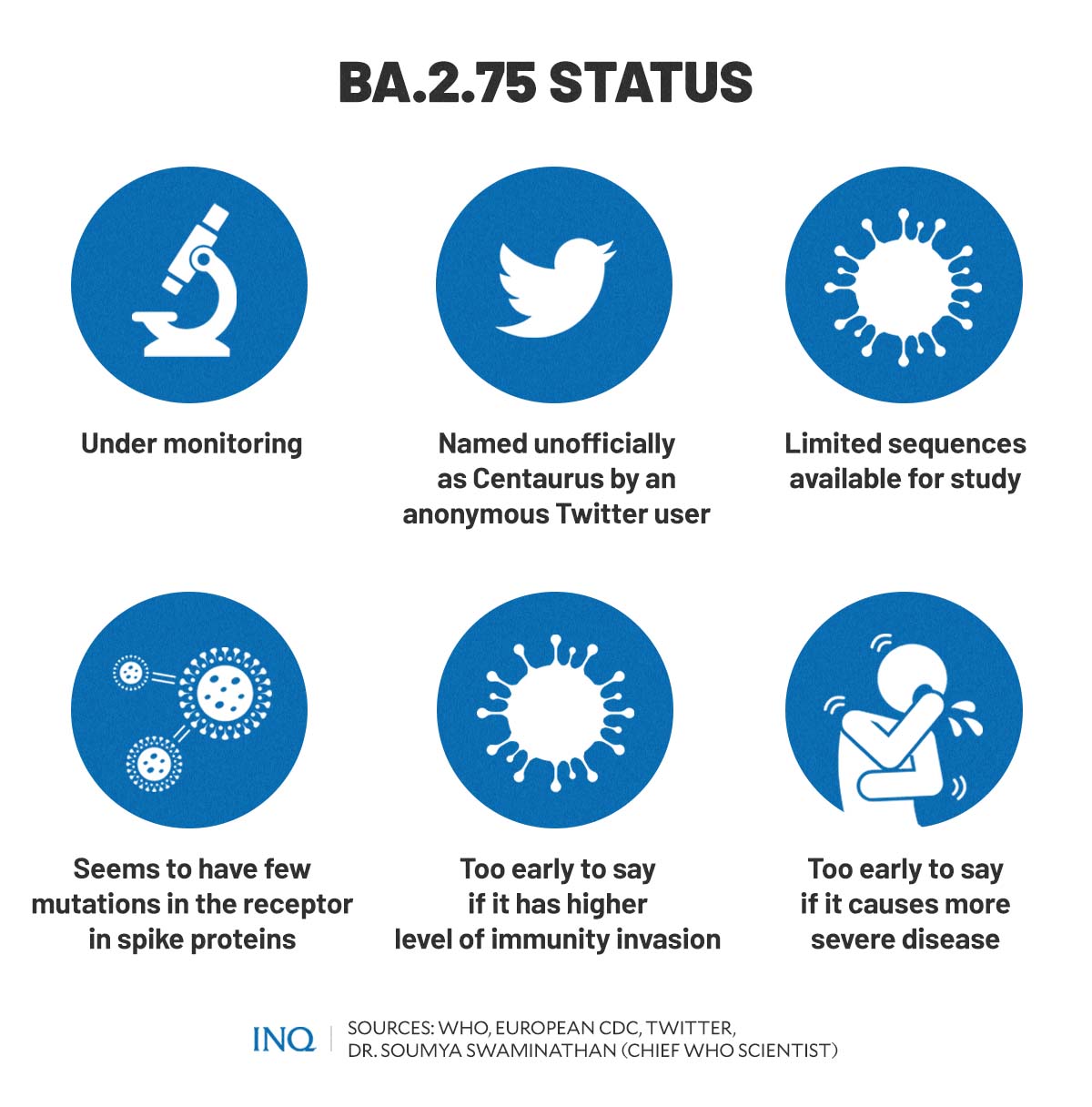 The chief scientist said WHO will have to “wait and see” as the organization’s Technical Advisory Group on Virus Evolution (TAG VE) constantly looks at data from around the world.

“[I]f at any time if there is an emergence of a virus that looks very different from a previous one enough to be called a separate variant of concern, then the committee will do that.”

WHO follows a Greek naming system in labeling key variants of SARS-CoV-2.

Last year, on May 31, the UN agency announced that it would use the letters of the Greek alphabet to rename the variants to make them easier to say and remember as well as to avoid stigma and discrimination.

These labels, however, do not replace the existing scientific names of variants—assigned by GISAID, Nexstrain, and Pango—which convey important scientific information and will remain to be used in research.

READ: Kappa: The continuing mutation of the COVID virus

WHO currently only renames variants that are on its list of Variants of Concern (VOC) and Variants of Interest (VOI)—covering both currently and previously circulating VOCs and VOIs.

WHO has yet to assign a Greek letter for the BA.2.75 as it remains an Omicron sub-variant and not a VOC nor a VOI.

Recently, the strain has been recently dubbed online—and in several international reports—as “Centaurus,” which started with a Twitter user.

“I have just named BA.2.75 variant after a galaxy. Its new name is Centaurus strain,” Twitter user Xabier Ostale wrote on July 2. 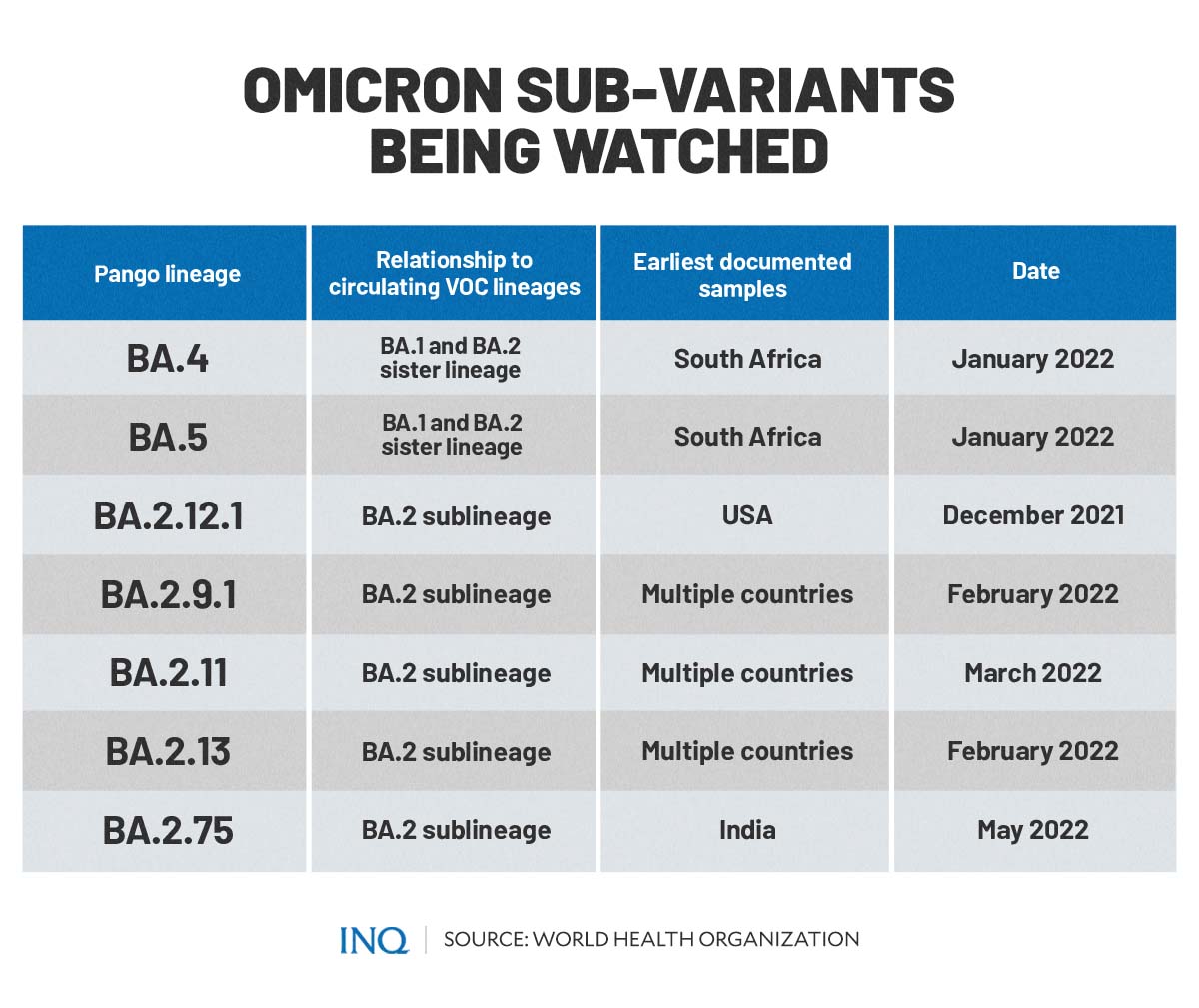 In a story published in the Washington Post, Emma Hodcroft, a molecular epidemiologist and researcher at the Switzerland’s University of Bern, said that with the lack of an “easy, mutual language” about a variant, people would start looking for one.

“With Centaurus, as far as naming goes, it’s fine in that it’s not geographical, it’s not harmful, it’s not misleading. Nobody’s getting it mixed up with a constellation,” Hodcroft said.

“But it may not be so lucky next time,” she said. “We’ve moved into a new phase of the pandemic now with these variants. They’re all kind of part of the same family.”

She suggested revisiting the naming system for sub-variants, adding that if no one were writing or talking about BA.2.75, “Centaurus probably wouldn’t have gotten much traction.”

In a separate series of tweets, Ostale explained that the public understands names or nicknames assigned to variants, sub-variants, and sub-lineages of SARS-CoV-2 rather than letters and numbers—referring to scientific terms.

“WHO isn’t doing what they should do, name the variants and sub-lineages that are spreading more,” he wrote.

“Not everybody is a PhD that gets informed everyday about variants and sub-lineages. They just watch the news from time to time, if they are said BA.2.75 is surging in many countries, they are not going to get an idea, they won’t even be able to talk with others about it,” he added.

“[W]hatever people call it, its emergence is yet another example of SARS-CoV-2’s impressive capacity for change, and a warning that further variants and sub-variants will continue to emerge for as long as large numbers of people continue to be infected,” said international organization Gavi Vaccine Alliance.

Gavi added that continued surveillance of the virus remains “essential,” as well as continued preventive measures against infections and reinfections.

“This includes vaccines, as well as improved ventilation, avoiding other people if you have symptoms, and considering wearing a good quality mask in crowded public spaces.”

No need for tighter border controls

Despite growing concerns over the BA.2.75 Omicron sub-variant, the Department of Health (DOH) has yet to recommend reimposing tight border controls in the Philippines.

“We do not recommend further restrictions on our borders just because we have detected additional sub-variants in other countries. But we would like to remain vigilant,” said acting Health Secretary Maria Rosario Vergeire.

“Our surveillance system is up. We are closely monitoring. We are prepared in our communities and even in our hospitals if and when the number of cases continues to increase in the country,” she added.

The country’s health department has previously recorded 79 new COVID-19 Omicron sub-variant infections—60 of these cases were of the BA.5 sub-lineage, 17 were BA.2.12.1, and two were BA.4.

READ: BA.5: Another Omicron sub-variant and its impact on PH recovery

Experts have been weighing in on whether the currently available COVID vaccines will work against the BA.2.75 Omicron sub-variant.

Peter Chin-Hong, an infectious disease specialist at the University of California San Francisco (UCSF), told CBS News there are high hopes that the vaccine can still protect individuals against serious illnesses even with the new sub-variants.

“The silver lining is it probably is going to perform the same way, where if you are vaccinated and boosted your B cells and T cells will kick the enemy out even if the front guards have cataracts on their eyes.”

“[W]e’re not seeing any change at this point in terms of protection against severe illness or major change and severity,” she said.

“And while that remains true, it’s about getting up-to-date with your boosters, wearing your masks indoors, especially if you’re in settings where you don’t know a vaccine status, you know, testing, isolating, quarantining. There’s no magic to this, but we do have the tools.”

Cleveland Clinic has reminded the public that heeding preventive measures and protocols against COVID-19 and the virus’ variants and sub-variants can help minimize infection and reinfection—especially amid the spread of BA.2.75.

“The best preventive measures include getting vaccinated, wearing a mask during times of high transmission, staying 6 feet apart, washing hands often, and avoiding people who are sick.”