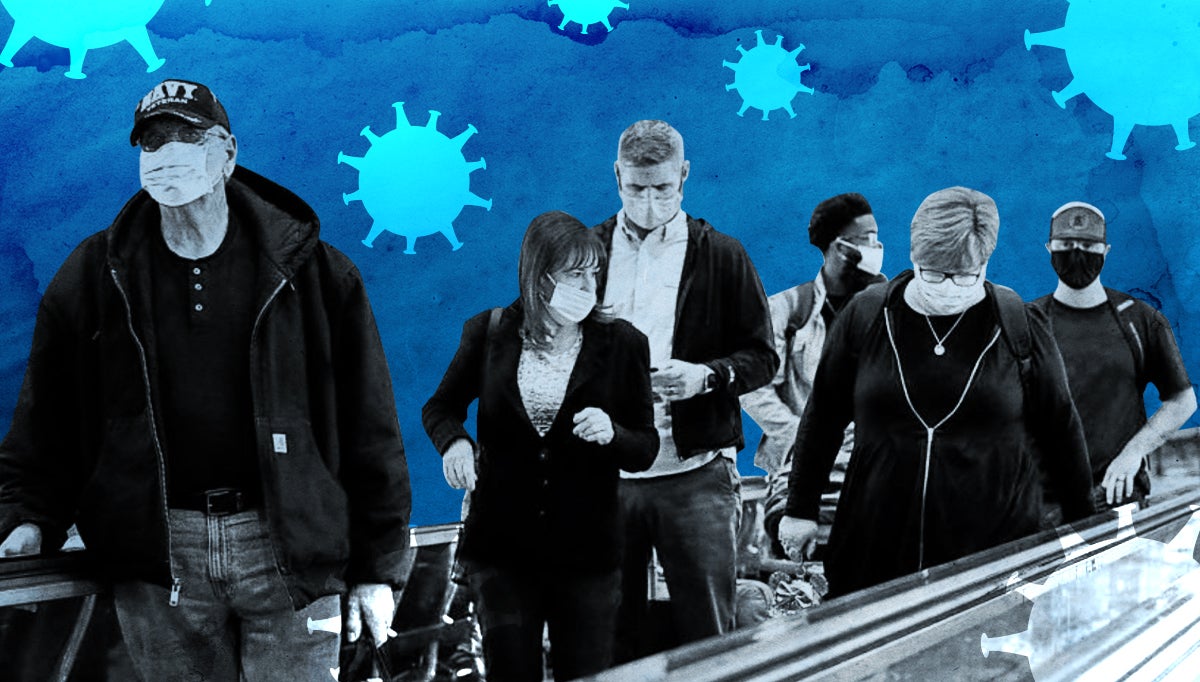 MANILA, Philippines—Just as the Philippines started to relax restrictions as COVID cases declined, scientists in South Africa announced the discovery of yet another variant of concern—Omicron.

The B.1.1.529 variant—considered as a COVID strain—was first reported to the World Health Organization (WHO) by South Africa on Nov. 24. It was first designated as a variant under monitoring (VUM).

On Nov. 26, following the advice of WHO’s Technical Advisory Group on Virus Evolution (TAG-VE), the variant B.1.1.529 was designated as a variant of concern (VOC) and was named after Omicron, the 15th letter of the Greek alphabet.

In this article, INQUIRER.net will list what scientists and medical experts know so far about the new variant and how we can protect ourselves against COVID in general.

What makes it different?

Omicron was described by WHO as a “highly divergent variant” with a large number of mutations, “some of which are concerning.” Among all variants of SARS Cov-2, the virus that causes COVID-19, Omicron was found to have the most mutations.

According to Tulio de Oliveira, virologist at the University of KwaZulu-Natal and Network for Genomics Surveillance in South Africa’s (NGS-SA), the variant contains around 50 mutations.

WHO noted 26 to 32 mutations found in the variant’s spike protein—the crowns dotting the virus and the part that the virus uses to infect human cells. 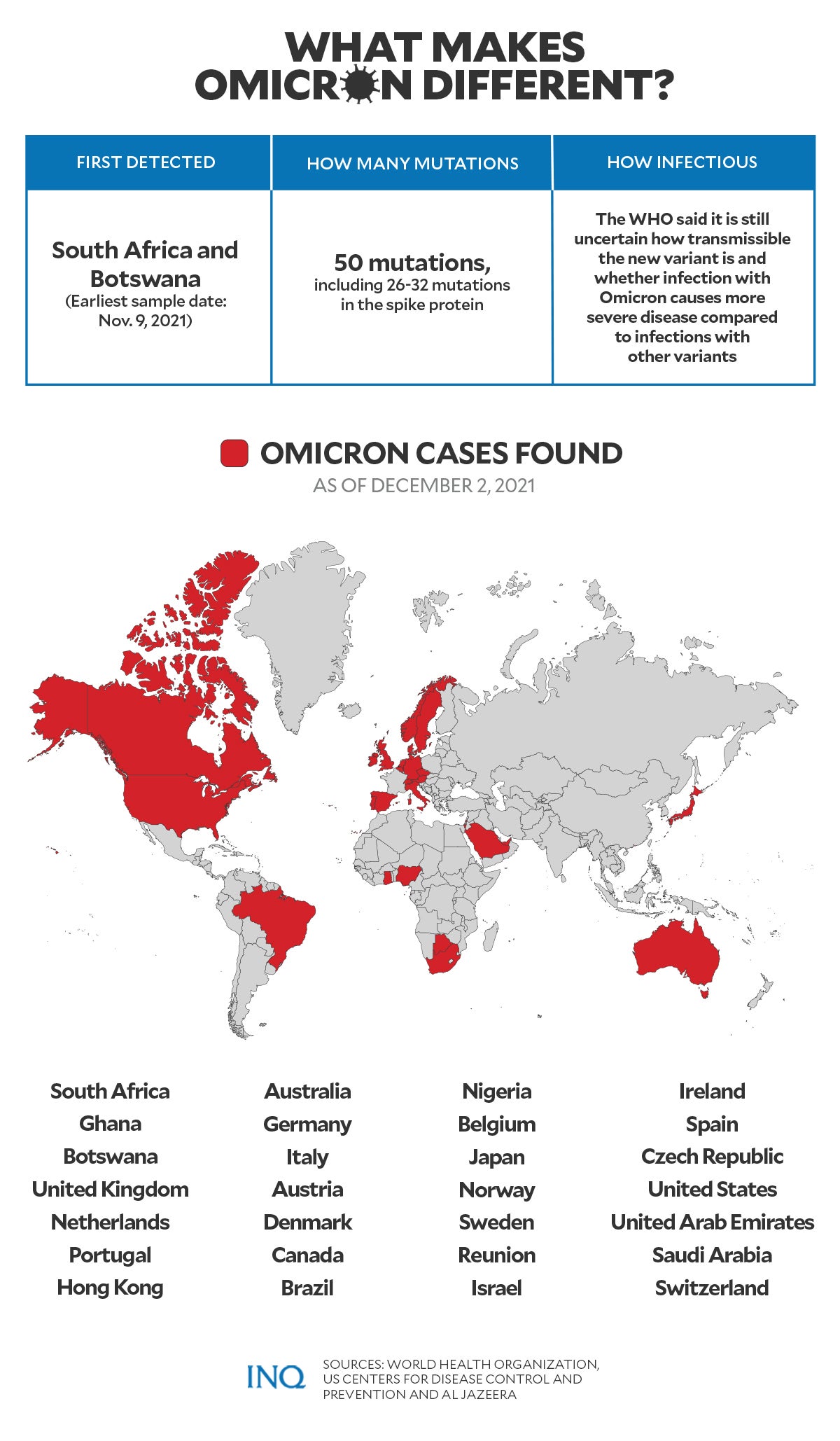 In an update on Nov. 30, WHO said mutations in Omicron’s spike protein “may enhance its transmissibility and/or enable some degree of immune escape.”

Dr. Rontgene Solante, chief of the Adult Infectious Diseases and Tropical Medicine unit of the Philippines’ San Lazaro Hospital, echoed the WHO findings.

“These are all possibilities because this is the first time we have seen a variant of concern wherein we have—to be exact—32 mutations in the spike protein,” Solante said in an interview over ANC. “These 32 mutations are really significant that it can be highly transmissible and can also affect our vaccines,” Solante said.

Professor Mosa Moshabela, deputy vice-chancellor of Research and Innovation at the University of KwaZulu-Natal, explained that some of the mutations were already seen before in the Delta and Beta variants.

According to a report by The New York Times, the Omicron variant contains a combination of mutations including D614G, N501Y, and K417N which were found in other variants and might make the virus more infectious. D614G drew the most attention because it allowed the virus to be more efficient in infecting cells.

However, there are many other mutations in the new variant that are new.

“We don’t know what the combination of those mutations will translate into,” Moshabela said.

Still, Solante said most variants eventually “mutate to be weaker.”

“Most of the variants mutate to be weaker as the pandemic goes on. As the virus stays in our body, they become weaker,” said Solante.

“But there are vulnerable populations [where] this virus can stay longer, and I think this mutation was driven in a patient who is immunocompromised,” he said.

“It stays longer in the body and since it will adapt to survive in that particular body wherein the immune response is so weak, then that’s where the mutation comes in,” he added.

Mutations, according to Dr. Stuart Ray, vice chair of medicine for data integrity and analytics at Johns Hopkins University School of Medicine in the US, are normal and not new in RNA viruses like SARS-CoV-2.

“All RNA viruses mutate over time, some more than others,” said Dr. Robert Bollinger, professor of infectious diseases at John Hopkins. “For example, flu viruses change often, which is why doctors recommend that you get a new flu vaccine every year,” he said.

READ: Kappa: The continuing mutation of the COVID virus

WHO said in a statement that “there is preliminary evidence suggesting that Omicron may have potential immune escape and/or possibly higher transmissibility, as compared to previous VOCs, that could lead to further surges.”

“As a result of this, the overall global risk related to the new VOC Omicron in the context of the COVID-19 pandemic is very high.”

Some experts said the Omicron variant might be more dominant than the highly-transmissible Delta variant.

“Based on the epidemiology data, it seems like the new variant has advantages in transmitting over the previous variants,” virologist Pei-Yong Shi, of the University of Texas Medical Branch in Galveston, said in an article published by NPR—an independent, nonprofit media organization.

“We thought what will outcompete Delta? That has always been the question, in terms of transmissibility at least,” Adrian Puren, acting executive director of South Africa’s National Institute for Communicable Diseases, told Reuters.

A side-by-side visual model of the structural context on mutations and associated variants of Omicron and Delta was published by the COG-UK Mutation Explorer (COG-UK/ME) online to show the difference in mutation between the two variants.

Do you want to see omicron spike mutations? Have a look at this beautiful image from @_wharvey now available on our dashboard https://t.co/x2zsrhKj8Y pic.twitter.com/qgGHv7xqSV

“Everyone is afraid that Omicron will be significantly more transmissible than Delta. Upon first impression, it looks like it could be,” said Dr. Jeremy Luban, a virologist at the University of Massachusetts Medical School, in the same NPR article.

“But that could be totally wrong. Right now, nobody knows. The problem is that our data is very limited,” he added.

WHO clarified that it is still not yet certain whether Omicron is more contagious than other variants, including Delta.

It added that the results of preliminary evidence on the transmissibility of Omicron “contains considerable uncertainty and will be updated as more information becomes available.”

“The number of people testing positive has risen in areas of South Africa affected by this variant, but epidemiological studies are underway to understand if it is because of Omicron or other factors.”

The WHO added that it is also not clear whether infection with Omicron causes a more severe disease compared to infections with other variants.

“Preliminary data suggests that there are increasing rates of hospitalization in South Africa, but this may be due to increasing overall numbers of people becoming infected, rather than a result of specific infection with Omicron,” said WHO.

“There is currently no information to suggest that symptoms associated with Omicron are different from those from other variants,” it continued.

“Initial reported infections were among university students—younger individuals who tend to have more mild disease—but understanding the level of severity of the Omicron variant will take days to several weeks.”

All variants of COVID-19, WHO explained, can cause severe cases or deaths, most especially among vulnerable people.

WHO also addressed other concerns about the Omicron variant, including the rate of reinfection among people who have previously had COVID-19.

The UN agency said people who have previously contracted the disease could become reinfected more easily with Omicron than other variants.

However, evidence and information supporting this claim are still limited.

“More information on this will become available in the coming days and weeks,” WHO said.

WHO also said it is working with technical partners to understand the potential impact of the new variant on the effectiveness of currently available COVID vaccines.

“There is no world, I think, where (the effectiveness) is the same level we had with Delta,” Bancel said.

“I think it’s going to be a material drop. I just don’t know how much because we need to wait for the data. But all the scientists I’ve talked to  are like ‘this is not going to be good’,” Moderna’s CEO added. 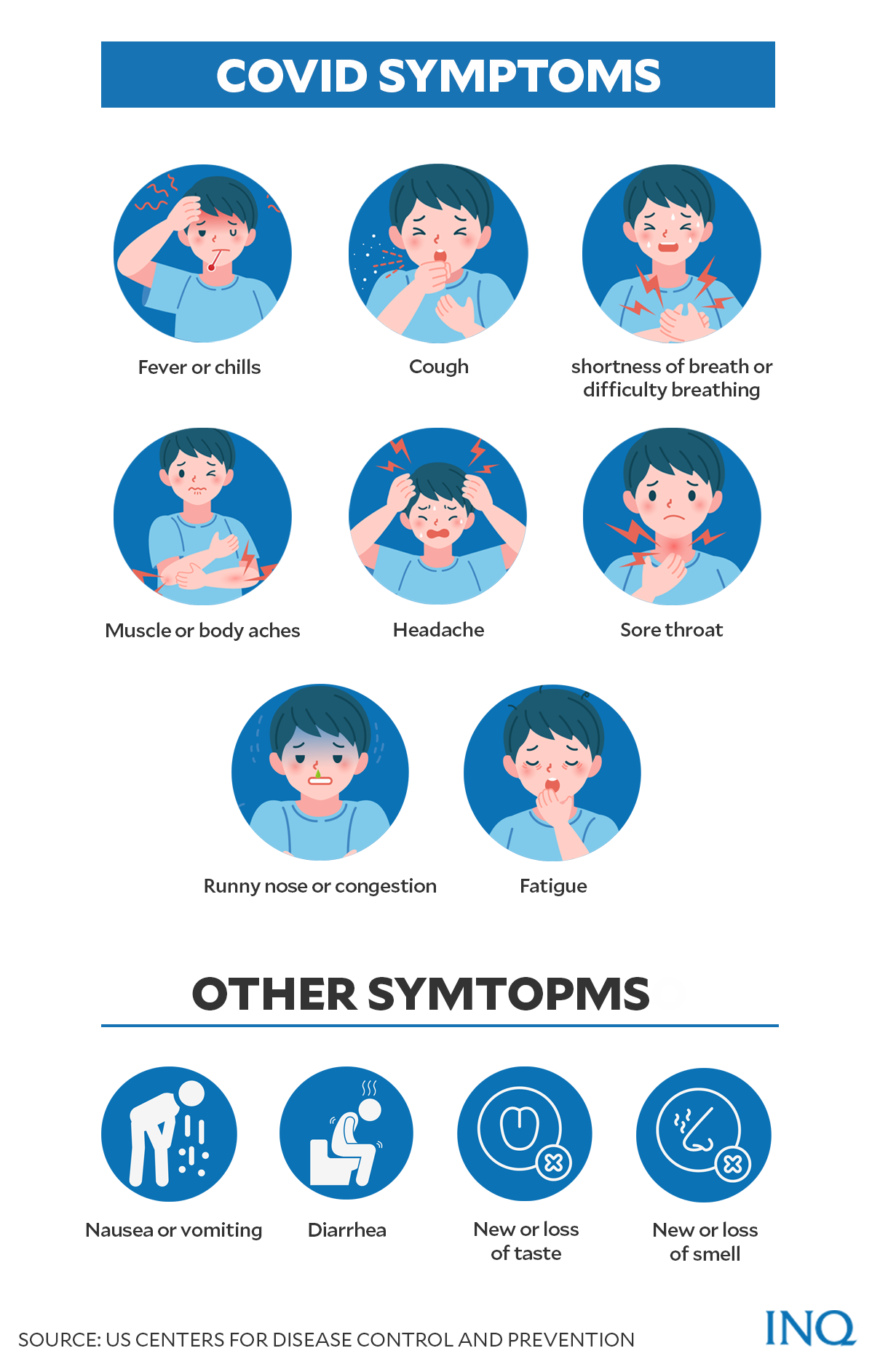 In an interview with British Broadcasting Corp., Dr. Angelique Coetzee—the South African doctor who first detected Omicron—said some of the symptoms linked with the new variant were “extremely mild.”

Coetzee, who is also chair of the South African Medical Association, explained that patients who got infected with Omicron since Nov. 18 manifested “unusual symptoms” which were slightly different from the Delta variant.

“It actually started with a male patient who’s around the age of 33 and he said to me that he’s just extremely tired for the past few days and he’s got these body aches and pains with a bit of a headache,” she said about some of the symptoms associated with Omicron.

She added that the patient had a “scratchy throat” and that the patient did not have a sore throat, did not lose his sense of taste or smell, and had no cough—all of which are symptoms associated with COVID and older variants of SARS Cov-2.

“At the present time, WHO is coordinating with a large number of researchers around the world to better understand Omicron,” WHO said.

“Studies currently underway or underway shortly include assessments of transmissibility, severity of infection (including symptoms), performance of vaccines and diagnostic tests and effectiveness of treatments,” it added.

According to the United States Centers for Disease Control and Prevention (CDC), some of the mild to severe symptoms of COVID-19 include: 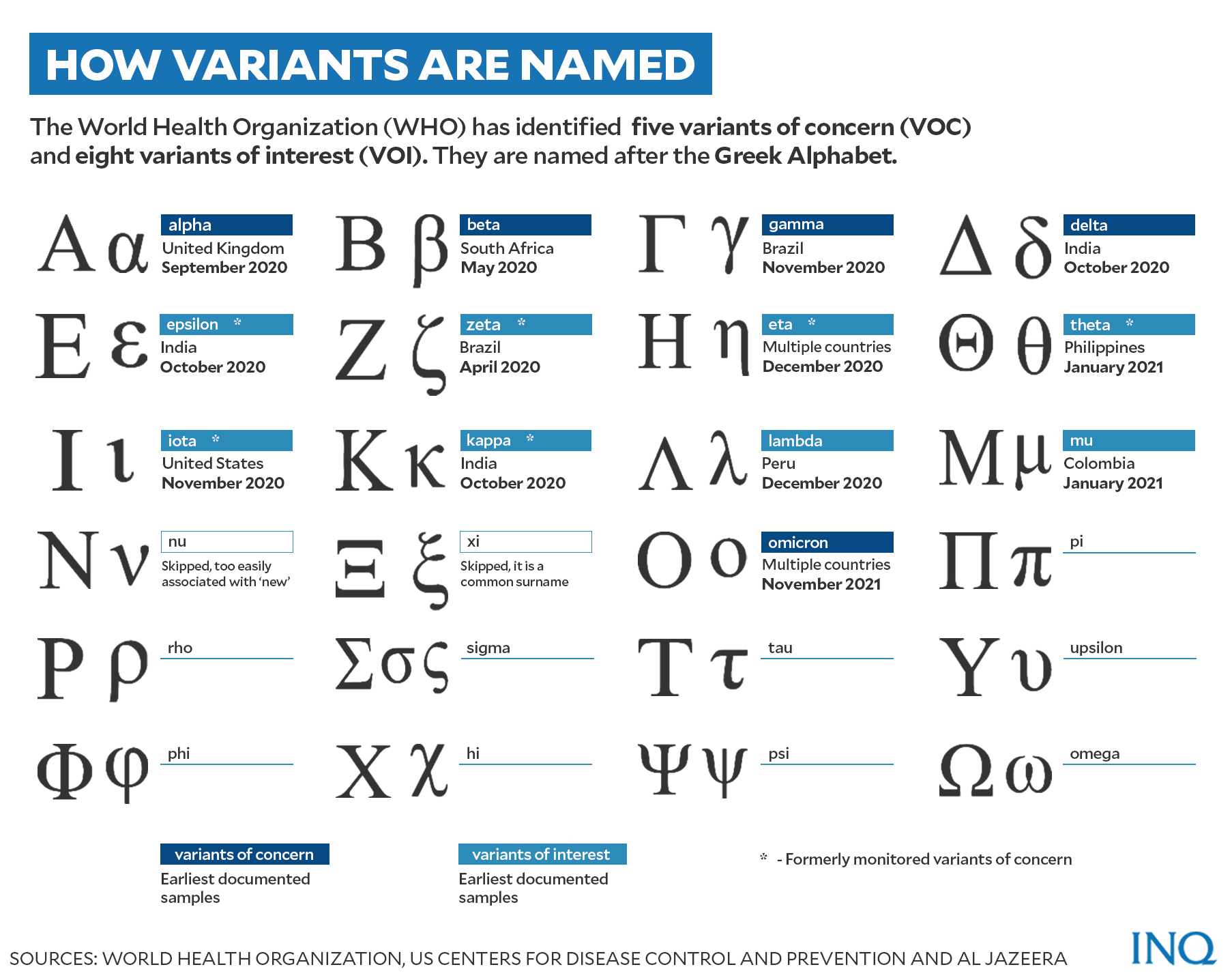 The new Omicron variant has joined the list of WHO’s VOC, which included:

Meanwhile, WHO is still monitoring variants of interest (VOI), which include:

WHO has been using the letters of the Greek alphabet to label key variants of SARS-CoV-2.

According to WHO, the decision to rename the variants was to make them easier to say and remember as well as to avoid stigma and discrimination.

Following the sequence of the Greek alphabet and the already current variants recorded by the WHO, the new variant could have been named “Nu” which came after Mu.

However, WHO skipped Nu as well the letter which came after it—Xi.

“‘Nu is too easily confounded with ‘new’ and ‘Xi’ was not used because it is a common last name,” WHO spokesperson Tarik Jasarevic told The New York Times, explaining why WHO skipped the two Greek letters. Xi is the surname of the current leader of China where SARS Cov-2 was believed to have originated.

What should we do? 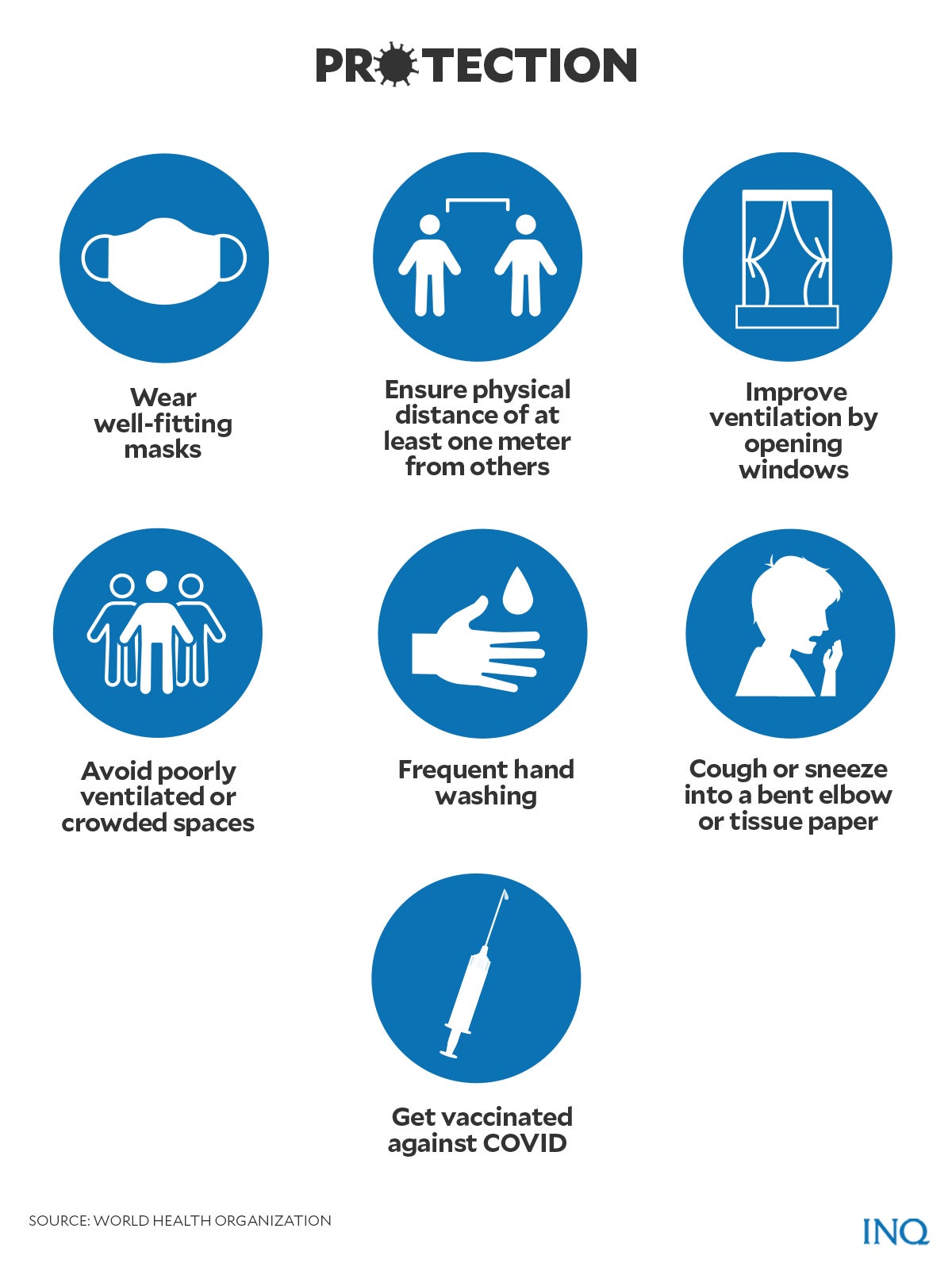 To keep people safe amid the global spread of Omicron, WHO advised the public to follow public health and social measures.

WHO, on Nov. 28, also issued a technical brief and priority actions for member states.

Enhancing Readiness for Omicron (B.1.1.529): Technical Brief and Priority Actions for Member States

Among the priority actions recommended by WHO, based on risk assessment, to improve readiness for Omicron were:

RELATED: What you need to know about Omicron and other Covid variants