Kappa: The continuing mutation of the COVID virus 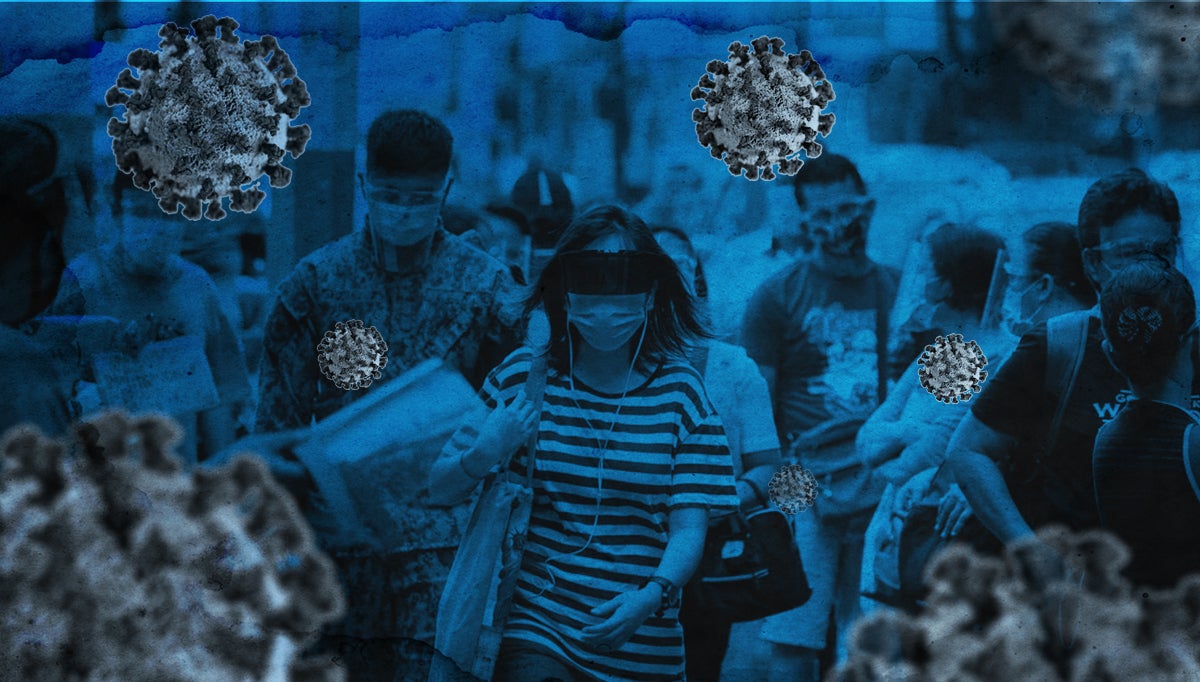 MANILA, Philippines—Another variant of SARS-Cov-2 is being currently watched by health experts—Kappa.

There’s no finding yet if the new variant would behave in a similar way as Delta, the variant which was found by experts to be as contagious as the virus that causes chickenpox.

The rate of infection of the chickenpox virus, according to the US Centers for Disease Control and Prevention (CDC), is 10 percent, which means one infected person can pass on the infection to 10 others.

The emergence of Kappa is no cause for concern yet. Experts have not found it to be as contagious or dangerous as Delta.

But the new variant showed the typical behavior of viruses, like SARS-Cov-2, which are not being considered by many experts as a living thing.

According to a report in Washington Post in March 2020, quoting experts, viruses can make 10,000 copies of itself inside a living cell in just hours. “Within a few days, the infected person will carry hundreds of millions of viral particles in every teaspoon of his blood,” said the report.

“They break into your home, eat your food, use your furniture and have 10,000 babies,” the report quoted Pekosz as saying. “And then they leave the place trashed.”

Scientists have found viruses do not survive without a host. Viruses, the Washington Post report said, “function through us.” “With no cellular machinery of their own, they become intertwined with ours. Their proteins are our proteins.”

While most viruses’ behavior was typical, SARS-Cov-2 is “particulary enigmatic,” said the report.

The Department of Health (DOH) on Monday (Nov. 8) announced that the country has recorded its first case of the B.1.617.1 COVID-19 variant, known previously as Kappa.

Health Undersecretary Maria Rosario Vergeire said a case of the variant has been detected in an individual from Floridablanca, Pampanga.

Here’s what we know so far about this newly-detected variant in the country, as well as the other variants recorded and monitored in the country.

According to Vergeire, the first B.1.617.1 case was detected in a 32-year-old male in Pampanga province, whose sample was collected on June 2.

Authorities reported that the man had mild disease severity but has already recovered.

“Further investigation is being done by our regional epidemiology and surveillance unit in order to gather more information on this case and there is strict monitoring of this case and the community,” Vergeire said.

The health undersecretary said that it was a local case.

The B.1.617.1, which originated in India in October 2020, was designated as a variant of interest (VOI) by the World Health Organization (WHO) last April 4.

However, the WHO on Sept. 20 changed the variant’s designation to a variant under monitoring (VUM), according to Vergeire.

A variant will be designated as VOI given the following conditions, according to WHO:

If the SARS-CoV-2 variant has genetic changes that are “predicted or known to affect virus characteristics” which included “transmissibility, disease severity, immune escape, diagnostic or therapeutic escape.”

If the variant was identified to cause “significant community transmission or multiple COVID-19 clusters, in multiple countries with increasing relative prevalence alongside increasing number of cases over time, or other apparent epidemiological impacts to suggest an emerging risk to global public health.”

WHO defined VUMs as variants “with genetic changes that are suspected to affect virus characteristics with some indication that it may pose a future risk, but evidence of phenotypic or epidemiological impact is currently unclear, requiring enhanced monitoring and repeat assessment pending new evidence.”

The Kappa variant was also placed by WHO under the “deescalated category” as of September 2021. 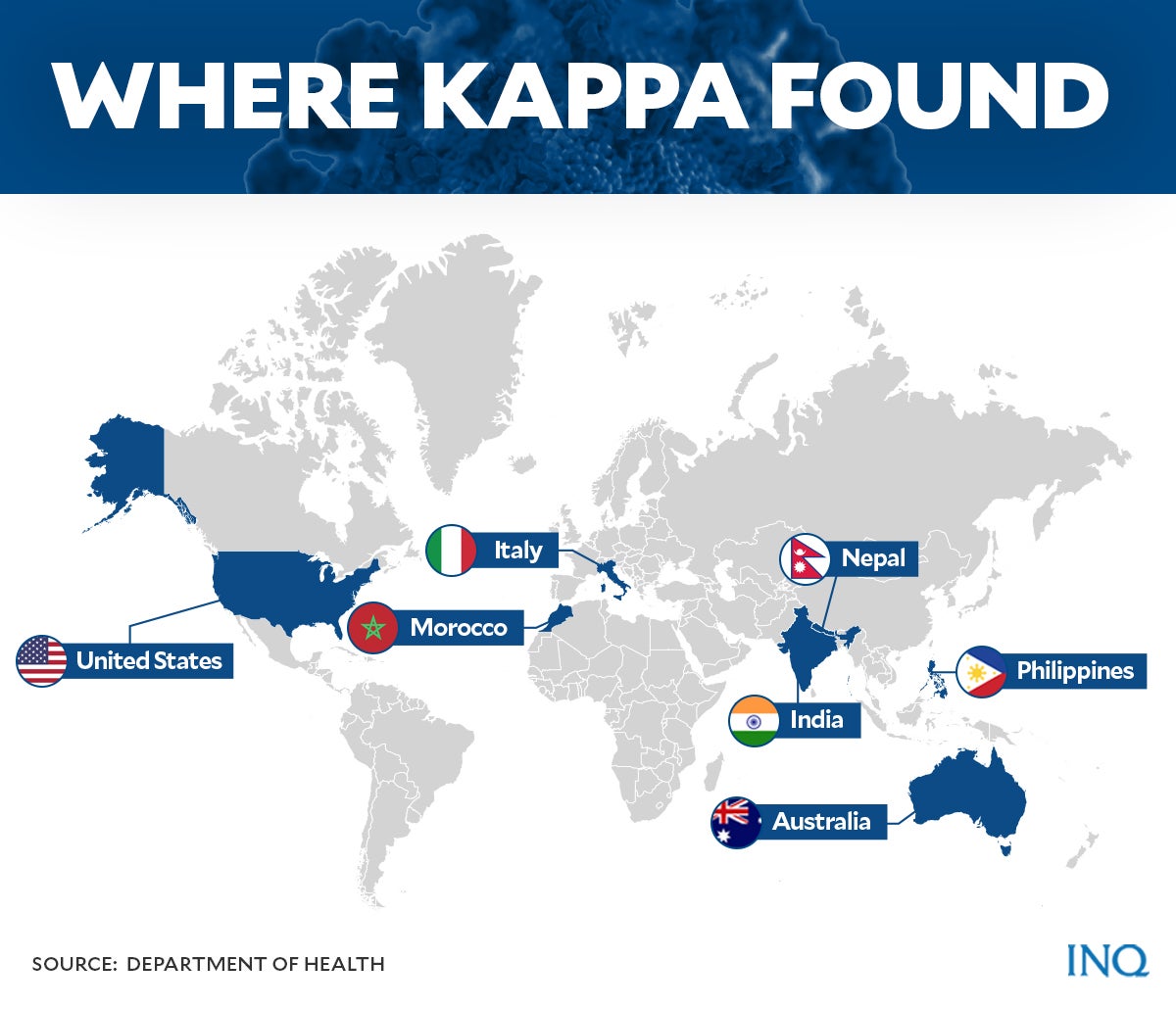 The variant had already been detected in other countries aside from India and the Philippines, including the United States, Morocco, Italy, Nepal, and Australia.

It is still unclear whether the B.1.617.1 variant is as dangerous as its sibling, the highly transmissible Delta variant.

The term variant, according to health reform advocate Dr. Tony Leachon, is used “when classifying a known virus that has developed a ‘specific group of mutations’ that causes the variant to behave differently than that of the strain it originated from.”

Dr. Stuart Ray, vice chair of medicine for data integrity and analytics at Johns Hopkins University School of Medicine in the US, said that variants emerge when there is a change or mutation to a virus’s genes.

While the term mutation might sound concerning, it is normal and not new in RNA viruses such as SARS-CoV-2.

“All RNA viruses mutate over time, some more than others,” said Dr. Robert Bollinger, professor of infectious diseases at John Hopkins. “For example, flu viruses change often, which is why doctors recommend that you get a new flu vaccine every year,” he said.

Bollinger explained that genetic changes could cause the SARS-CoV-2 to have a more contagious variant—which can already be observed in the Delta variant.

Some mutations could also affect the coronavirus’s spike protein, or the crowns seen in them, and make the virus bind more tightly into an infected person’s cells.

“This appears to make some of these new strains ‘stickier’ due to changes in the spike protein and therefore more easily transmitted,” he said.

Ray likened these genetic mutations in viruses to scars that people accumulate over a lifetime, “incidental marks of the road, most of which have no great significance or functional role.”

“When the evidence is strong enough that a viral genetic change is causing a change in the behavior of the virus, we gain new insight regarding how this virus works,” he said.

“The virus seems to have some limitations in its evolution – the advantageous mutations are drawn from a relatively limited menu – so there is some hope that we might not see variants that fully escape our vaccines,” he added.

While some variants could cause concern, Bollinger reminded people that there is no need to overreact.

“But, as with any virus, changes are something to be watched, to ensure that testing, treatment and vaccines are still effective,” Bollinger assured.

“The scientists will continue to examine new versions of this coronavirus’s genetic sequencing as it evolves,” he continued.

Alpha, Beta, Delta, Gamma, and Kappa. If the names of SARS Cov2 variants sound Greek to you, they are.

On May 31, WHO announced that it will use the letters of the Greek alphabet to label key variants of SARS-CoV-2.

These labels, however, do not replace the existing scientific names of variants—assigned by GISAID, Nexstrain and Pango—which convey important scientific information and will remain to be used in research.

According to WHO, the decision to rename the variants was to make them easier to say and remember as well as to avoid stigma and discrimination.

“While they have their advantages, these scientific names can be difficult to say and recall, and are prone to misreporting,” WHO said.

“As a result, people often resort to calling variants by the places where they are detected, which is stigmatizing and discriminatory,” it added.

“To avoid this and to simplify public communications, WHO encourages national authorities, media outlets and others to adopt these new labels.”

The DOH last March said it discouraged the naming of variants after countries where these were first detected since it may cause discrimination.

“We don’t like the practice of naming the virus or the variant after a country because it causes discrimination against people from that certain country,” Dr. Anna Ong-Lim, of the DOH technical working group on variants, said.

The statement came after the health department confirmed the emergence of the P.3 variant that was detected in Japan from a traveler from the Philippines.

“I’d like to establish that we call this the P.3 variant. We want to do away with referring to it as the Philippine variant because it is not an acceptable practice that we assign names from places,” Ong-Lim added.

Naming diseases or viruses by their place of origin, however, is nothing new and has been considered a tradition by some.

There are official names of diseases which included the countries or region they were first identified in, like German measles, Middle East respiratory syndrome (Mers), Japanese encephalitis, Zika—a forest in Uganda and Ebola — named after a river in the Democratic Republic of Congo.

However, Gavi Vaccine Alliance (Gavi) noted that this naming tradition could cause “huge stigma both to the countries and their people, especially those who have migrated to other parts of the world.”

“The COVID-19 pandemic has seen anti-Asian racism and violent xenophobic attacks linked to both the origins of the coronavirus and variants of it,” said Gavi. “In the United States, East Asians have been harassed and violently attacked for spreading ‘the China virus’,” it said.

“Similarly, with the emergence of a new variant in India, countries like Singapore have seen anti-Indian racism spike,” it added.

Here are some of the SARS-CoV-2 variants and their WHO label, scientific name, previous label and designation based on data by WHO. 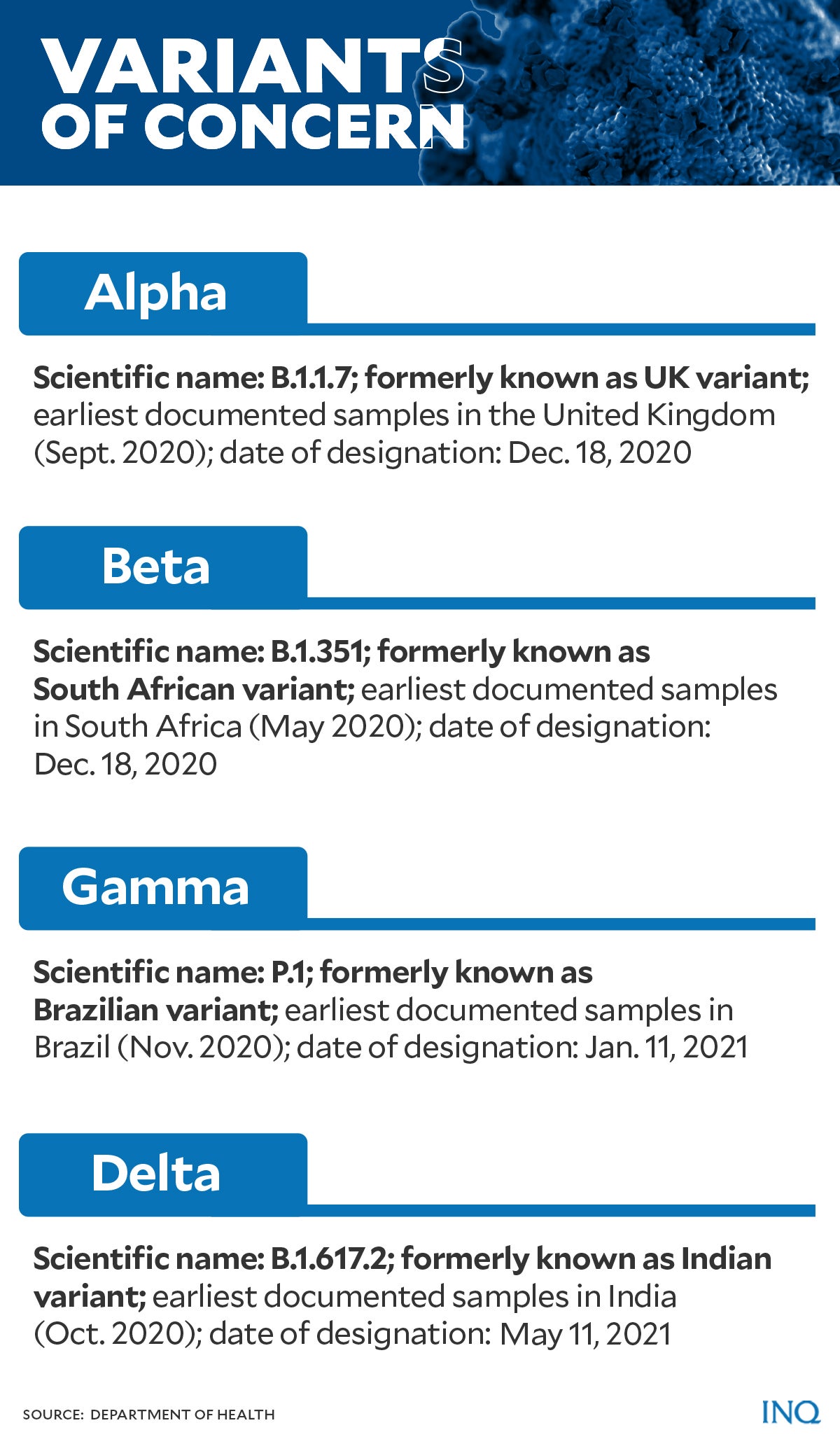 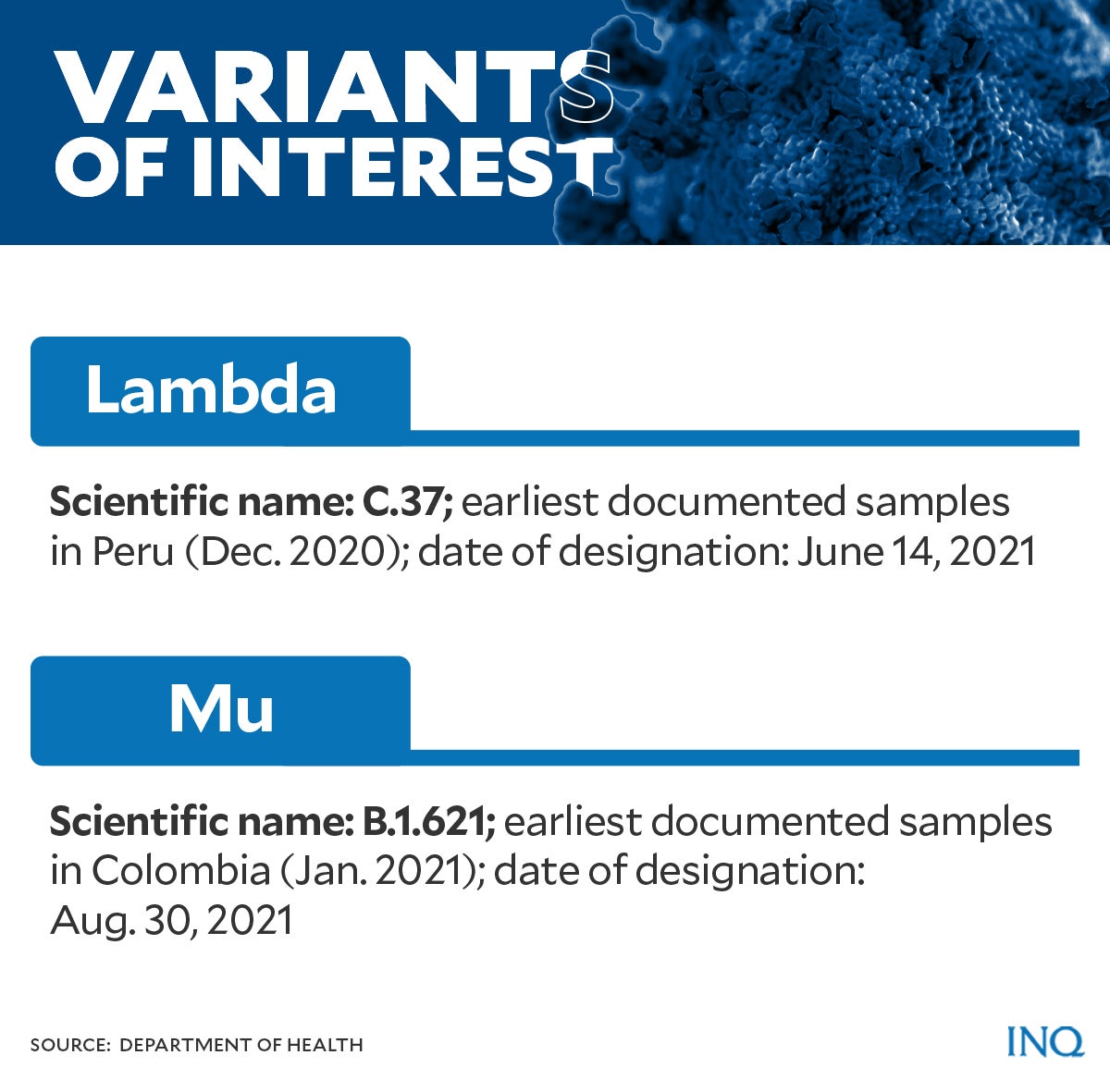