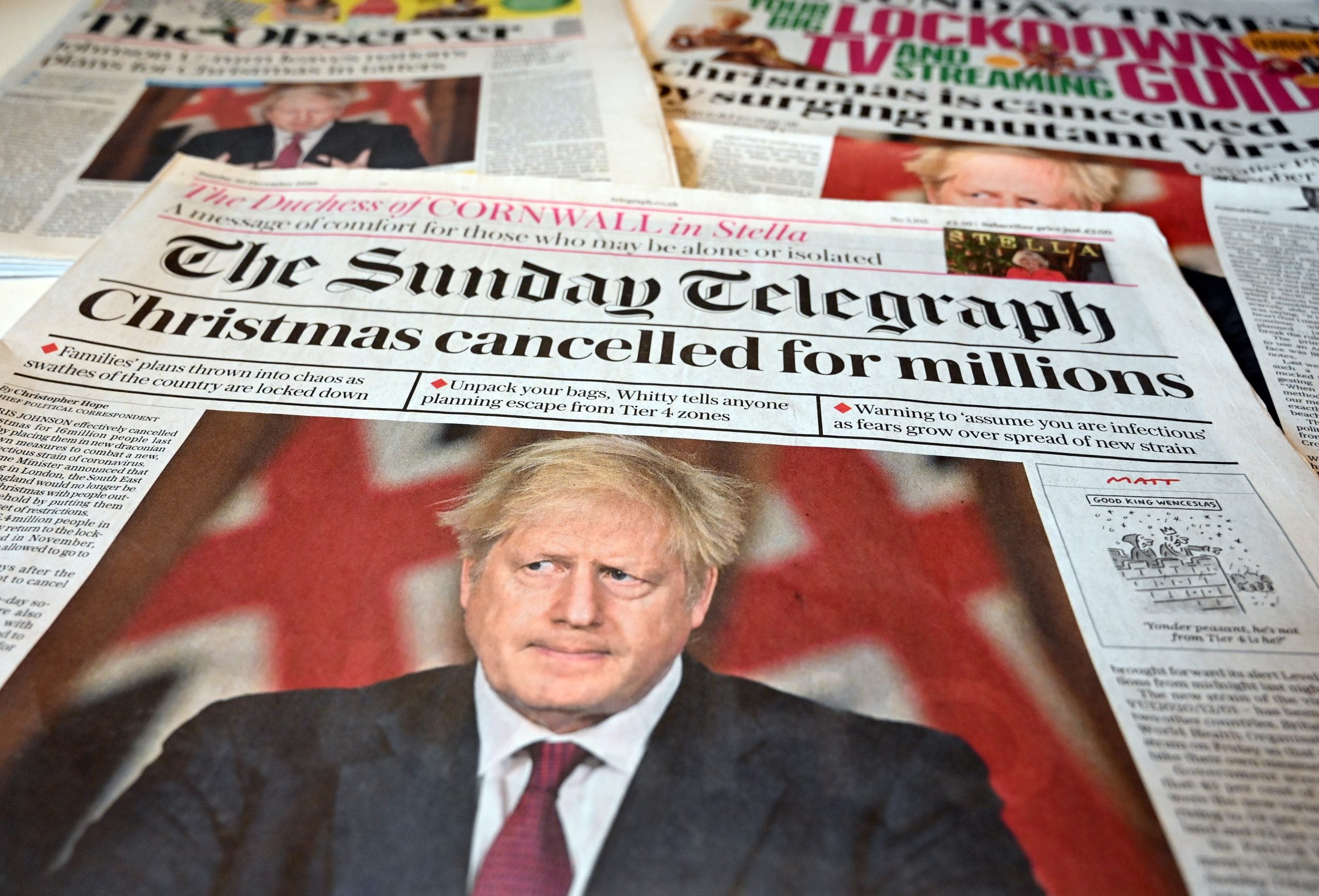 An arrangement of UK daily newspapers photographed as an illustration in Liverpool on December 20, 2020, shows front-page headlines reporting on the story of Britain’s Prime Minister Boris Johnson introducing new tougher coronavirus COVID-19 restrictions for London and the South East of England, canceling Christmas gatherings for those in the new ‘tier 4’ category. – British Prime Minister Boris Johnson on Saturday announced a “stay at home” order for London and southeast England to slow a new coronavirus strain that is significantly more infectious. He ordered new restrictions for London and south-eastern England from Sunday, saying that “residents in those areas must stay at home” at least until December 30. The measures will mean around a third of England’s population cannot travel or meet other households for Christmas. (Photo by Paul ELLIS / AFP)

MANILA, Philippines —  Following the news about the procurement of COVID-19 vaccines and the ongoing inoculation in some countries, the United Kingdom (UK) shocked nations when it announced having cases of B.1.1.7 – a new “variant” of SARS-Cov-2, the virus that causes COVID-19.

According to an article posted on the UK government’s website, on December 14, the Public Health England (PHE) identified a “new variant” of SARS-CoV-2 across the south and east of England. It was named “VUI-202012/01” – also known as B.1.1.7  – which means the first Variant Under Investigation in December 2020.

As of December 13, the PHE said 1,108 cases of the new variant had been detected.

A week following the announcement, UK Health Secretary Matt Hancock declared that the “new strain” has become “out of control.”

British Prime Minister Boris Johnson also imposed stricter restrictions in the country after scientists, according to him, found that the new strain “may be up to 70 percent more transmissible than the earlier strain.”

Despite the clarifications by the World Health Organization (WHO) and the United States (US) that there is no hard evidence yet to prove that the UK variant can be more contagious, many countries have decided to enforce travel bans and restrictions.

This is after several cases of the UK-based COVID-19 variant have been confirmed in different countries across the world.

So far, little is known about this COVID-19 update. However, in terms of labeling and identification, many have argued whether it should be called a strain, a variant, or a mutation.

“The press often uses the terms “variant,” “strain,” “lineage,” and “mutant” interchangeably. For the time being in the context of this variant, the first three of these terms are generally being used interchangeably by the scientific community as well,”  the CDC added.

What is the difference between strain, variant, and mutation?

“A strain of a virus has distinct properties and a particular immune response. Then there’s going to be lots and lots of variants which will be, in many cases, minor accumulations of mutations and different kind of genetic lines of that strain,” Jean-Paul Soucy, a Ph.D. student at the University of Toronto’s Dalla Lana School of Public Health, told in an interview with Canadian television network CTV News.

“[A]ll currently known variants of COVID-19 belong to the SARS-CoV-2 strain and have not mutated enough to either be classified as their own strain or be ineffective against current and prospective COVID-19 vaccines,” Soucy clarified.

Meanwhile, health reform advocate Dr. Tony Leachon explained that the term variant is used “when classifying a known virus that has developed a ‘specific group of mutations’ that causes the variant to behave differently than that of the strain it originated from.”

On the other hand, a virus is labeled or called a mutation once there is a change in the “nucleotide sequence of the RNA (a nucleic acid that serves as a messenger carrying genetic information) of the virus.”

Mutations alter the biology of SARS-CoV-2. An example of a mutation is in B.1.1.7 where an amino acid in the “spike” protein of the virus was replaced with a different type of amino acid.

“This variant has a mutation in the receptor-binding domain (RBD) of the spike protein at position 501, where amino acid asparagine (N) has been replaced with tyrosine (Y). The shorthand for this mutation is N501Y, sometimes noted as S:N501Y to specify that it is in the spike protein,” the CDC explained.

“A strain of the virus is considered a variant when it has enough mutations to change a minor portion of its genetic code. The most recent variant found in the U.K. meets that benchmark,” said Leachon.

“This variant, known as B.1.1.7, spreads far more easily between people as a result of a series of mutations that have been identified in the genetic coding,” he added.