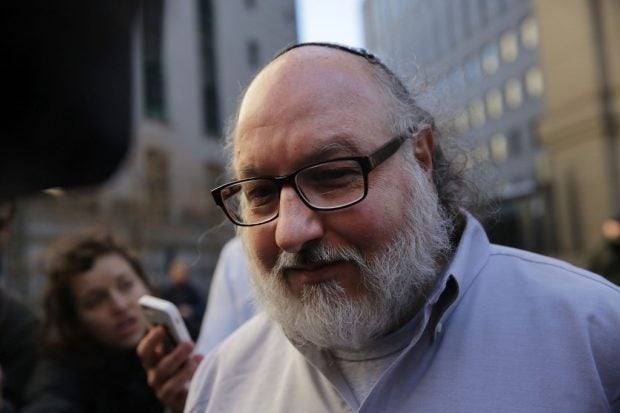 A file photo taken on November 20, 2015 shows Jonathan Pollard, the American convicted of spying for Israel, leaving a New York court house following his release from prison on November 20, 2015 in New York. Pollard, an American jailed in the US in 1985 for spying for Israel, landed in the Jewish state on December 30, 2020, where he was received by Prime Minister Benjamin Netanyahu. Photo by Spencer PLATT / GETTY IMAGES NORTH AMERICA / AFP

JERUSALEM — Jonathan Pollard, an American jailed in the US in 1985 for spying for Israel, landed in the Jewish state on Wednesday, where he was received by Prime Minister Benjamin Netanyahu.

Pollard, 66, served 30 years in prison for giving away classified US documents, and had been confined by parole terms to the US since his release in 2015, despite Israeli pressure to allow him to leave.

The US Justice Department removed the terms and conditions last month.

A video distributed by the prime minister’s office showed Pollard and his wife Esther walking down the stairs of a plane toward Netanyahu, who raised his hand in welcome.

Pollard then removed his mask and got down on his hands and knees to kiss the Israeli ground, with Esther following suit.

Netanyahu along with Pollard said the traditional Jewish blessings for something long-awaited happening and for prisoners being released, before handing him an Israeli identity card.

Pollard said he and Esther were “ecstatic to be home at last after 35 years, and we thank the people and the prime minister of Israel for bringing us home.”

“We hope to become productive citizens as soon and as quickly as possible and to get on with our lives here,” he said.

Israel has imposed its third nationwide lockdown to contain the novel coronavirus and current restrictions compel anyone entering the country to spend at least 10 days in quarantine in a government-selected hotel.

There was no immediate indication as to whether Pollard and his wife had been exempted from those restrictions.

Pollard was a US Navy intelligence analyst in the mid-1980s when he made contact with an Israeli colonel in New York and began sending US secrets to Israel in exchange for tens of thousands of dollars.

Pollard, who is Jewish, passed thousands of crucial US documents to Israel, straining relations between the two close allies.

Israel’s October 1985 raid on the Palestinian Liberation Organization’s Tunis headquarters that killed around 60 people was planned with information from Pollard, according to CIA documents declassified in 2012.

He was arrested in 1985 and was sentenced to life in prison two years later, despite pleading guilty in a deal his attorneys expected would result in a more lenient sentence.

After his release in 2015, he was kept in the United States by parole rules and not allowed to travel to Israel where his wife, whom he married after he was jailed, lived.

He remained subject to a curfew, had to wear a wrist monitor, and was prohibited from working for any company that lacked US government monitoring software on its computer systems.

Israel, where Pollard is regarded as a hero and which awarded him citizenship in 1995, repeatedly pressured Washington for his release, making it one of the top issues of bilateral relations.

But the US intelligence community was reportedly deeply opposed to giving him anything less than the sentence he received.