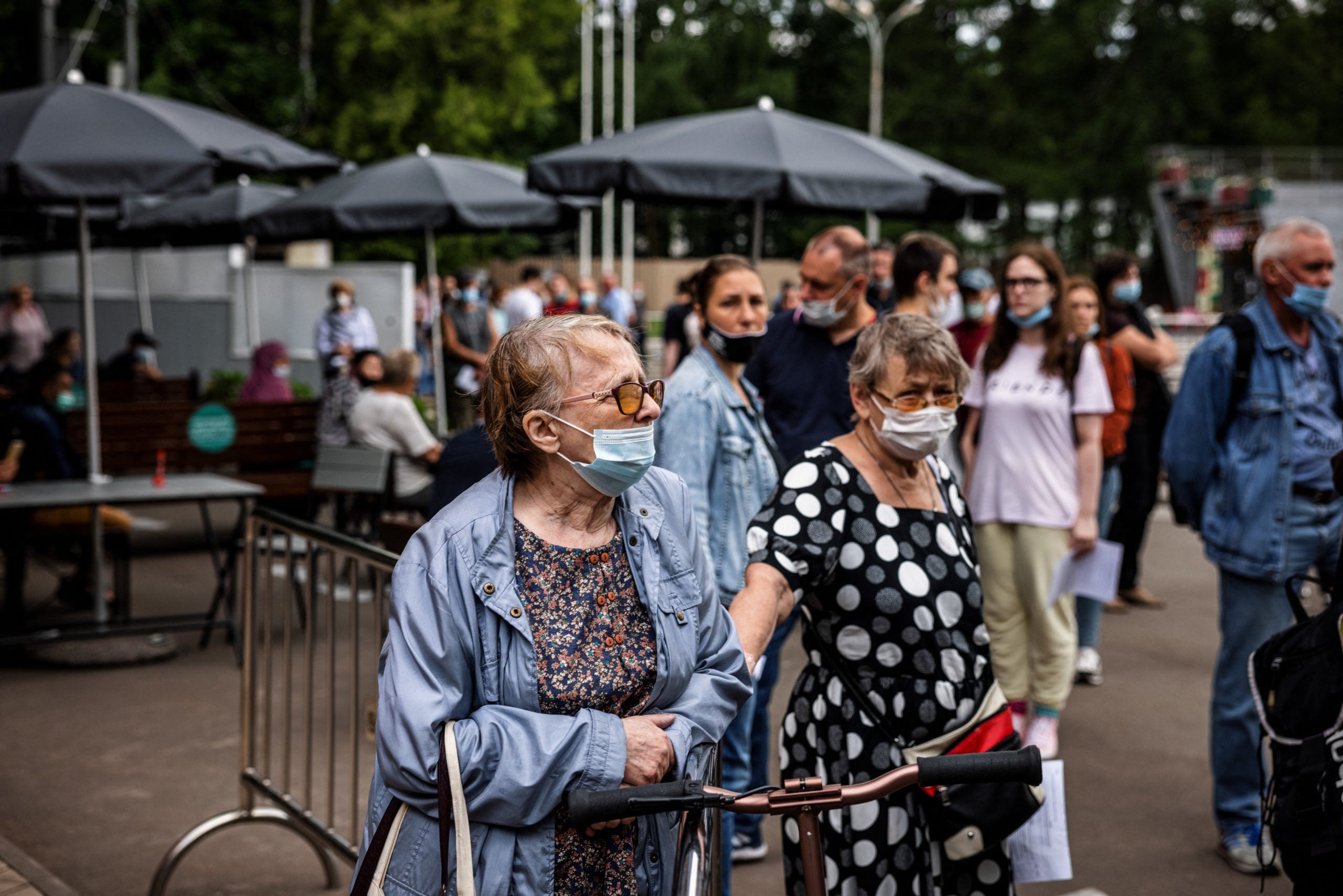 People wait in line to get a coronavirus, Covid-19, vaccine at a vaccination center in Sokolniki Park in Moscow on July 2, 2021. – Russia on July 2, 2021, reported 679 coronavirus deaths, a record number of pandemic-related fatalities over a 24-four period for the fourth day in a row, a government tally showed. Russia, the fifth worst-hit country in the world, is battling a surging outbreak driven by the highly infectious Delta variant and worsened by a lagging vaccination drive. (File Photo by Dimitar DILKOFF / AFP)

MANILA, Philippines — If the new names of SARS Cov2 variants sound Greek to you, they are.

Alpha, Beta, Delta, Gamma are now the names for the UK, South African, Indian and Brazil variants of the virus that causes COVID-19.

The name change did not mean different viruses but indicated sensitivity to the negative implications of naming SARS Cov2 variants after countries where they had been first discovered.

Of all the Greek-named variants, Delta is currently the focus of concern by scientists and experts studying the virus’ behavior and transmission.

Scientists said while SARS Cov2 is not a living thing, mutations of the virus emerge as it spreads through its main carrier, humans. 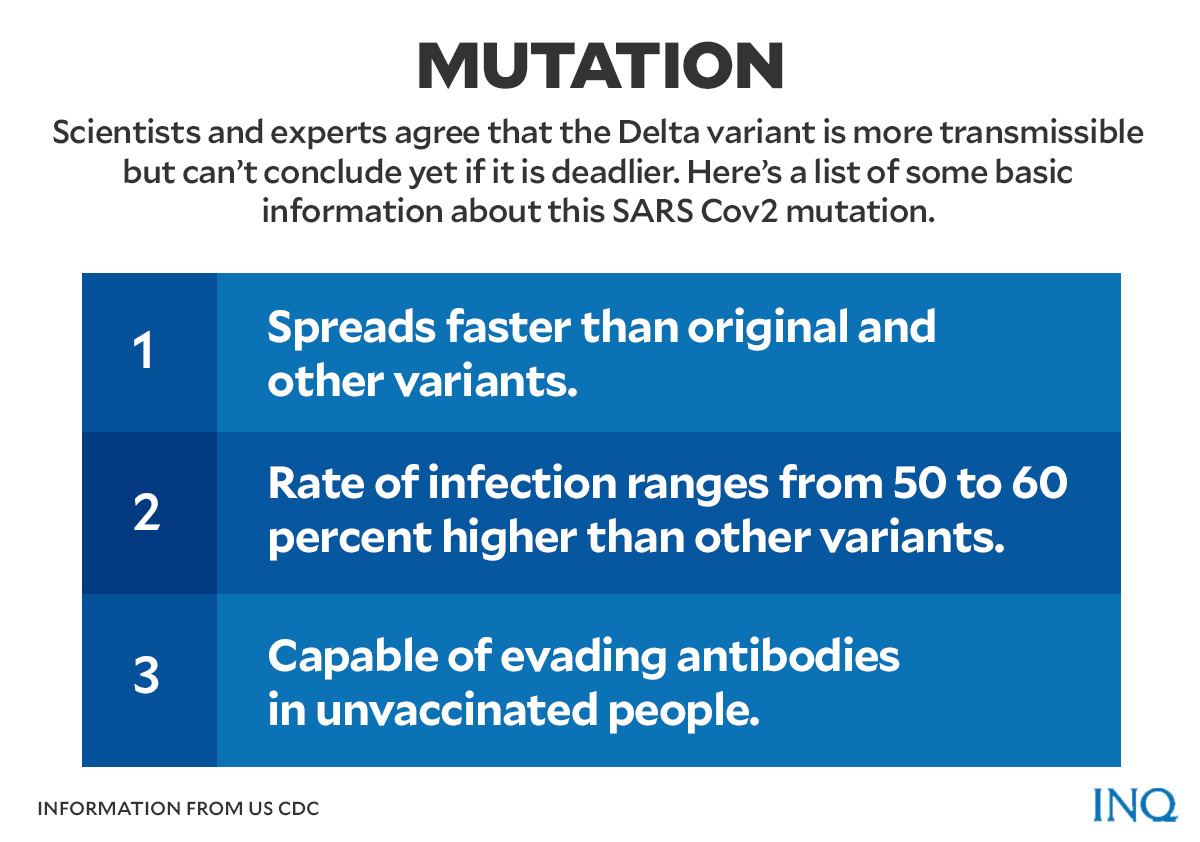 Although the variants came from the same virus each variant has its own set of mutations and changes in the virus’ spike protein (the crowns covering the virus and for which it was given the name corona).

Some variations may be more transmissible or resistant to treatments or vaccines.

“This is natural evolution and the virus is expected to change the more the virus circulates around,” she said.

Scientists’ attention nowadays is fixed on the Delta variant or B.1.617.2, which was first discovered in India in October 2020.

The variant, according to World Health Organization (WHO), contributed to the sharp rise in infections in India and has since become the dominant variant globally.

But what makes it more dangerous?

The Delta variant is believed to spread faster and easier than other variants —quicker than the original strain and the Alpha variant. The US Center for Disease Control and Prevention (CDC) said Delta was likely to cause a spike in COVID cases.

Scientists, however, vary in their findings on Delta’s level of infectiousness. One study said it could be 50 percent contagious than Alpha and another study suggested Delta was 60 percent more transmissible.

While WHO said that it is not yet confirmed whether Delta can cause a heightened risk of hospitalization, a study published in The Lancet, a peer-reviewed medical journal, found that Delta resulted in increased hospitalization among infected individuals in Scotland.

“Risk of COVID-19 hospital admission was approximately doubled in those with Delta,” said Aziz Sheikh, leader researcher of the study published by Lancet. 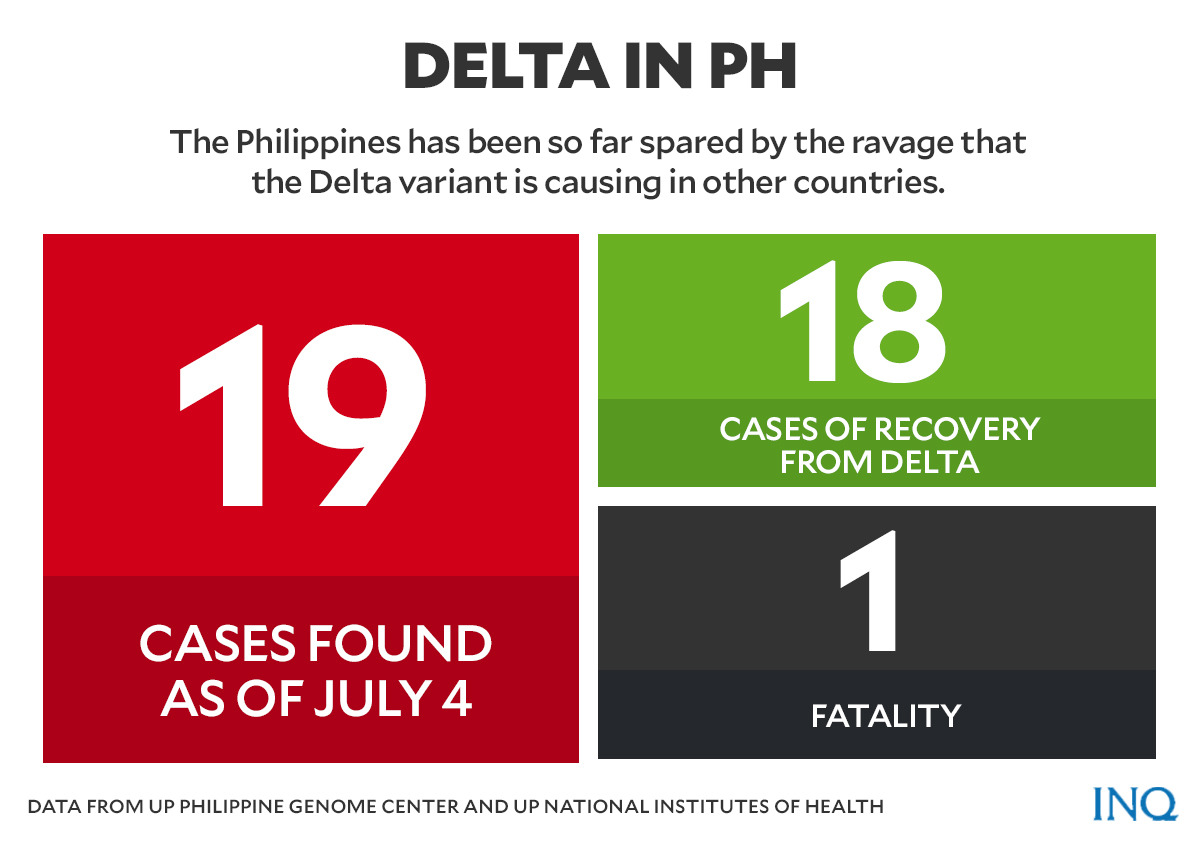 Risk of hospital admission, Sheikh said, “particularly increased in those with five or more relevant comorbidity.”

Studies also found that Delta contains several mutations of the spike protein (crowns) which might make it able to partially evade antibodies created after COVID-19 infection or from COVID vaccines.

Will vaccines work against Delta?

A study published on Thursday (July 8) in the journal Nature said a single dose of COVID-19 vaccine by Pfizer or AstraZeneca was not as effective against the Delta variant compared to having full two doses.

Sensitivity of infectious SARS-CoV-2 B.1.1.7 and B.1.351 variants to neutralizing antibodies

“In individuals that were not previously infected with SARS Cov2, a single dose of either Pfizer or AstraZeneca vaccines barely induced neutralizing antibodies against variant Delta,” the researchers said. 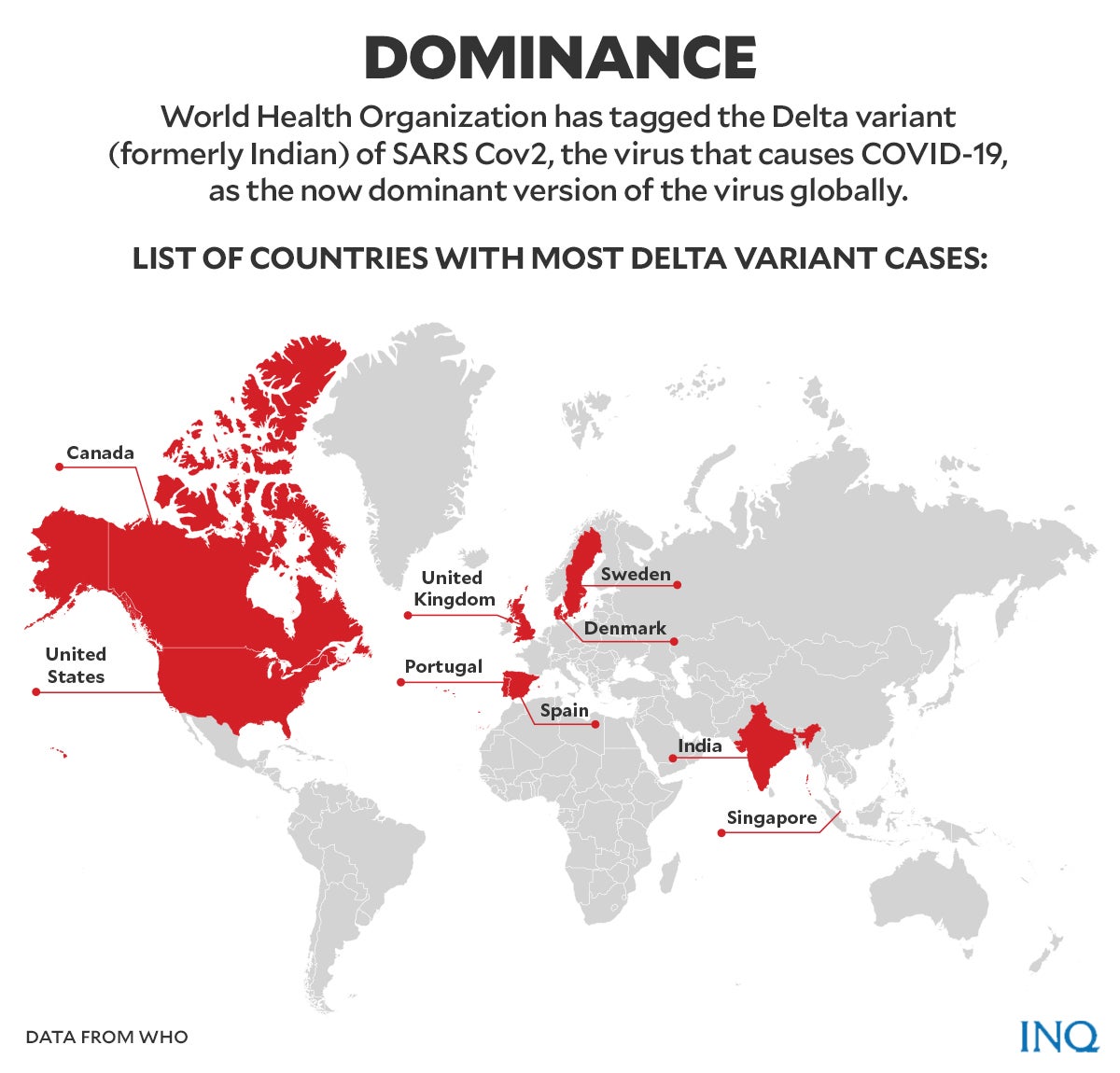 According to the COVID-19 Weekly Epidemiological Update by WHO, as of July 6, a total of 104 countries have reported either imported cases or community transmission of the Delta variant.

Scientific data showed that these countries have the most Delta cases:

The UP-Philippine Genome Center (UP-PGC) and UP-National Institutes of Health (UP-NIH) reported that as of July 4, a total of 19 cases of Delta variant has been recorded in the country.

Eighteen of those cases were already marked as recovered while one patient died.

The first two cases of the variant in the Philippines—two seafarers with no known history of travel to India—had been confirmed by the Department of Health (DOH) on May 11.

READ: What to do to prepare for Delta variant surge

Previously identified as the UK variant, the Alpha variant was said to be detected in the UK in December 2020.

However, an earlier statement by the UK government said that the variant might have possibly emerged as early as September “and then circulated at very low levels in the population until mid-November.”

A study published last March and cited by CDC said that the variant was 43 percent to 90 percent more transmissible.

According to WHO, the variant has been detected in 172 countries worldwide.

The top five countries with the most Alpha variant cases were:

The latest data showed that the Philippines has so far had 1,217 cases of Alpha variant.

Majority of the infected individuals—1,163—have already recovered. So far there are still seven active cases and 47 deaths caused by the Alpha variant.

DOH on Jan. 13 confirmed the variant has reached the Philippines.

TIMELINE: The new Covid-19 variant from overseas to PH

The first Filipino Alpha patient, who came from Dubai tested positive shortly after arriving in the Philippines.

By Jan. 26, the DOH announced local transmission of Alpha variant in Bontoc, Mountain Province following the detection of 12 cases in the town.

The CDC said the B.1.351 variant was initially discovered in Nelson Mandela Bay, South Africa, in samples dating back to early October 2020.

The variant was reported to WHO on Dec. 18.

It had been initially named as South African variant.

In December, WHO said preliminary studies on Beta suggested that it is “associated with a higher viral load, which may suggest a potential for increased transmissibility.”

On July 6, WHO noted that recent studies found increased transmissibility of Beta.

The possibility of increased hospitalization because of Beta has not been confirmed, according to WHO.

WHO said Beta had been detected in 122 countries.

Six cases of Beta were logged in the Philippines on March 2. Two OFWs returning home were among the carriers.

The National Institute of Infectious Diseases (NIID) of Japan detected the P.1 variant of SARS CoV2 on Jan. 6 in four travelers from Brazil who were tested during routine screening at the Haneda Airport on Jan. 2.

According to preliminary data, the Gamma has potential to increase transmissibility or re-infection of those who had recovered from COVID.

A study cited by CDC said a sudden surge in COVID cases in Manaus, the largest city in the Amazon, was being blamed on Gamma.

As of July 4, 74 countries have detected cases of Gamma, said WHO.

Unlike Delta, Alpha, Beta, and Gamma which are all categorized as variants of concern, the Lambda variant—said to have originated in Peru—is still being studied.

The Lambda variant is feared to be “more infectious” than the Delta variant by some researchers.

Still, Dr. Rabindra Abeyasinghe, WHO representative to the Philippines, has clarified that there is still not enough information to say that it is “more transmissible.”

Lambda COVID-19 strain not yet a ‘variant of concern,’ says WHO

The variant has yet to be detected in the Philippines. However, it was already found in 31 countries.

Most cases were recorded in Chile with a total of 840 cases. It was followed by the US with 635 cases, Peru with 242, Germany with 99, and Mexico with 98 infections.

No Lambda variant yet in PH – DOH

Japan first detected the Theta variant on March 13 after testing samples collected from a COVID-positive patient from the Philippines.

According to WHO, the Theta, previously called the “Philippine variant,” was initially marked as a variant of interest on March 24.

However, it was eventually declassified as a variant.

Aside from Japan and the Philippines, the Theta variant was also reported in 12 other countries including the US, Germany, Malaysia, and China.

The UP-PGC and UP-NIH listed a total of 166 cases of the Theta variant.