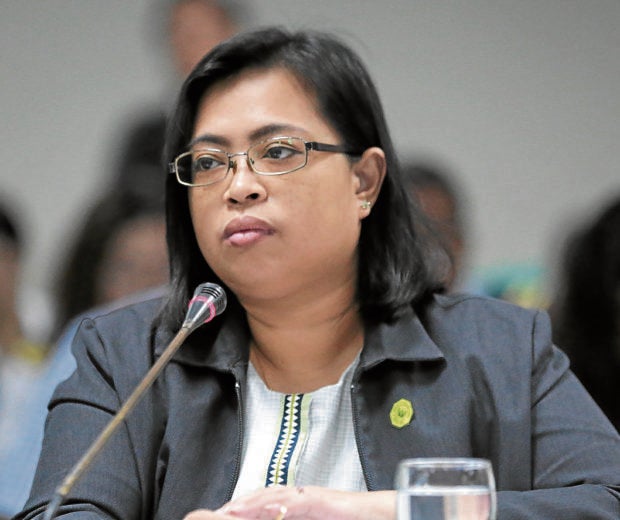 Dr. Alethea de Guzman, director of the Epidemiology Bureau of the Department of Health.

MANILA, Philippines — The Department of Health (DOH) confirmed the country’s first two cases of the India variant of the COVID-19 virus on Tuesday, the same day that the World Health Organization (WHO) declared the variant “a global concern.”

The WHO expressed concern that the B.1.617.2 variant, which first originated in India, is more transmissible, with mutations that easily allow the virus to get past the human body’s immune system.

The B.1.617.2 variant is the fourth to be designated as being of global concern and requiring heightened tracking and analysis. The others are those first detected in Britain, South Africa and Brazil. (See related story on this page.)

In an online briefing, Health Undersecretary Maria Rosario Vergeire said the Philippine Genome Center (PGC) had detected the B.1.617.2 variant in two seafarers with no known history of travel to India. Samples from their positive COVID-19 swab tests were sequenced as part of the DOH’s strengthened biosurveillance procedures, Vergeire said.

The first case is a 37-year-old male returning overseas Filipino from Oman who arrived in the Philippines on April 10 and was tested on April 15, said Dr. Alethea de Guzman, director of the DOH’s Epidemiology Bureau.

The second case is a 58-year-old Filipino male who came from the United Arab Emirates. He arrived in the Philippines on April 19 and was found positive for the virus on April 24.

The two have since recovered and are back in their home provinces in the Soccsksargen and Bicol regions, respectively, De Guzman said.

Their second RT-PCR tests had yielded negative results, she noted.

No close contacts were identified since both men were “immediately quarantined upon arrival,” De Guzman said, adding that those who sat near the two individuals on the plane back to the Philippines had tested negative for the virus.

The DOH was also verifying if all passengers potentially exposed to the two patients were able to complete their mandatory quarantine period of 14 days, she said.

Also on Tuesday, the DOH logged 4,734 new cases, the lowest since March 17 when the country recorded 4,387 new cases. But the health agency said the relatively low count could be due to the failure of 12 laboratories to submit their data on time.

The latest figure brought the country’s total case count to 1,113,547. In its daily case bulletin, the DOH said there were 56,752 active cases or currently sick individuals. Majority, or 93.4 percent of cases, were mild, 2.2 percent were asymptomatic, 1.4 percent were in critical condition, 1.8 percent had severe symptoms and 1.17 percent were moderate cases.

Measures are being put in place to prevent the spread of the India variant of the virus, Malacañang said on Tuesday, including a travel ban on all arrivals from India and its neighboring countries of Pakistan, Nepal, Sri Lanka and Bangladesh.

The Philippines has imposed a ban on travelers from India from April 29 to May 14.

All travelers arriving in the country are also required to undergo a 14-day quarantine, 10 days of which should be in a facility, said presidential spokesperson Harry Roque.

“We will continue to improve [the country’s health-care facilities] whether or not there is a new India variant. It is cheaper for the country to invest in [them] than to shut down our economy,” Roque said.

But former National Task Force adviser Dr. Tony Leachon faulted the government for acting “so late” and being “extremely weak on border controls,” as he noted the first two cases of the more transmissible India variant among ROFs.

The government showed “no vision of the future, no sense of urgency,” when it failed to ban foreign travelers sooner just like it (failed to do) last year, Leachon said Tuesday, referring to the belated ban on incoming travelers from Wuhan, China, where the first case of COVID-19 was reported.

But for Dr. Edsel Salvana, a member of the DOH Technical Advisory Group, the detection of the first two India variant cases in the country “shows that our enhanced biosurveillance is working and [that] it helps to keep track of variant introductions into the country.”

“No system is perfect and we have to constantly tweak our measures … Ultimately, even if these variants make it in, proper adherence to public health standards will keep them from spreading. Let’s all stick to the plan, get our vaccines and look forward to better days when we can finally take these masks off safely,” Salvana said.

Vergeire said only two of the five passengers from India who arrived in the country and tested positive for the virus prior to the imposition of the travel ban had met the criteria for whole genome sequencing.

One tested positive for a lineage which is not a variant of concern or a variant of investigation, while the fifth sample is still up for sequencing.

PGC Executive Director Cynthia Saloma also said that the genome center will immediately sequence the samples of the rescued seafarers from the MV Athens Bridge who had tested positive for the virus, since the ship has a known travel history to India.

Dr. Rontgene Solante, who is also member of the Infectious Diseases Society of America, said the Centers for Disease Control and Prevention (CDC) “considers” the India variant as one of the multiple factors driving the worst surge of infection in India.

According to the CDC website, a variant of concern shows evidence of an “increase in transmissibility, more severe disease (e.g., increased hospitalizations or deaths), significant reduction in neutralization by antibodies generated during previous infection or vaccination, reduced effectiveness of treatments or vaccines, or diagnostic detection failures.”

—With a report from Reuters