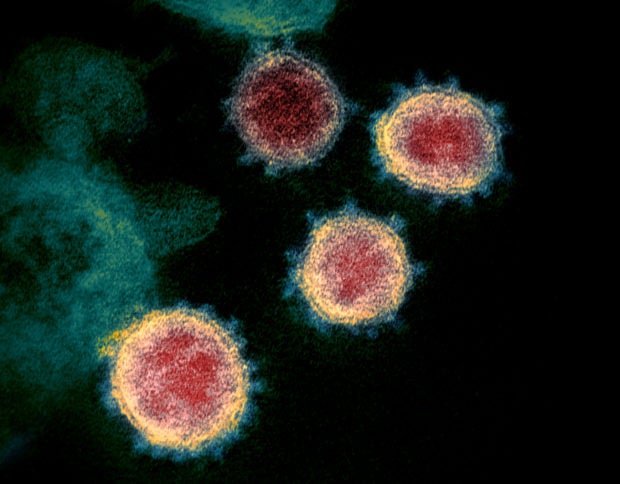 FILE PHOTO: This undated transmission electron microscope image shows SARS-CoV-2, also known as novel coronavirus, the virus that causes COVID-19, isolated from a patient in the U.S. NIAID-RML/Handout via REUTERS.

MANILA, Philippines — A mutated B.1.1.28 strain of the coronavirus that causes Covid-19 was found by Japan’s National Institute of Infectious Diseases (NIID) in a traveler that came from the Philippines, the agency announced on Friday.

According to a bulletin posted on NIID’s website, the said B.1.1.28 strain carries E484K and N501Y mutations — samples of which were obtained from a Covid-19 positive patient that came from the Philippines.

The mutations are said to be associated with increased transmissibility.

“The National Institute of Infectious Diseases, Japan, identified a B.1.1.28 strain with E484K and N501Y mutations from a SARS-CoV-2-positive sample collected on February 25, 2020 at a point of entry to Japan from a traveler from the Philippines […] These mutations are found in known VOCs (501Y.V2, 501Y.V3),” NIID said.

“This variant isolate also has the P681H mutation in the spike protein as with B.1.1.7 lineage (VOC-202012/01) which is suggested to be associated with increased transmissibility,” it added.

Japan’s NIID said that it is not sure whether this specific B.1.1.28 variant is the cause for the recent Covid-19 surge in the Philippines, but noted that it may be already be spreading undetected in the country.

Still, it warned that the impact of the said strain would be considered similar to the Covid-19 variants of concern, as it carries the similar mutations found in the dreaded variants.

During a briefing last Wednesday, University of the Philippines (UP) – Philippine Genome Center (PGC) Executive Director Dr. Cynthia Saloma said that the B.1.1.28 which originated from Brazil is not listed a variant of concern.

Currently, there are three Covid-19 variants of concern: the B.1.1.7 that came from the United Kingdom, the B.1.351 that traces to South Africa, and the P.1 from Brazil.

However, Saloma also mentioned that the dreaded P.1 variant is actually the offspring — a mutated version of the B.1.1.28, both of which hails from Brazil.

(So we have to differentiate this one (P.1) from the B.1.1.28.  Actually this P.1 which we have classified as a Brazil variant of concern — because there are other Brazil variants also — is the offspring of the B.1.1.28.  So in the Philippines, we still do not have the P.1.)

NIID also noted that the Philippines’ Department of Health found 34 cases with the two mutations.

“34 draft genome sequences of B.1.1.28 lineage with E484K/N501Y mutations have been uploaded to GISAID from the Philippines (1 sequence on February 26, 33 sequences on March 3),” NIID explained.

“The Department of Health, Republic of Philippines, published that they found 34 cases with E484K and N501Y mutations on March 2 (1),” it added.

Currently, Metro Manila is seeing a surge in Covid-19 cases — faster than earlier predicted, according to latest figures from OCTA Research.  In its latest report, the analytics group said that new cases in Metro Manila have reached almost 2,000 11 days before they initially predicted.

Using the latest numbers, NCR may face 4,000 new cases daily by the end of March, way higher than the highest seven-day average reported last August 2020, which was at 2,690.