MANILA, Philippines — The recent surge in the number of COVID-19 cases in Metro Manila was faster than what has been initially predicted, analytics group OCTA Research said Friday.

In its latest report, OCTA Research said they projected that COVID-19 cases in the National Capital Region (NCR) would reach 2,000 new cases by March 22, or over a week from today, March 12. However, NCR has already logged 1,975 new infections on March 11, it noted.

According to the group, the rapid climb was due to a higher rate of infection or reproduction number, currently at 1.8 — higher than the 1.6 which was part of OCTA Research’s previous predictions.

“It appears that the current trend is faster, as the region tallied nearly 2,000 cases on March 11, or 11 days earlier than projected. The faster increase in new cases is due to the higher reproduction number, currently 1.86, compared to Rt = 1.6 used in the original projections,” it explained.

Using the latest numbers, OCTA Research said NCR may face 4,000 new cases daily by the end of March, way higher than the highest seven-day average reported last August 2020, which was at 2,690.

Currently, NCR logs an average of 1,546 new cases per day in a week, according to OCTA Research.

“Using a reproduction number of Rt = 1.8, an updated projection is shown in the chart below. Based on the updated projections, the NCR is projected to have more than 4,000 new COVID-19 cases per day by end of March,” it said. 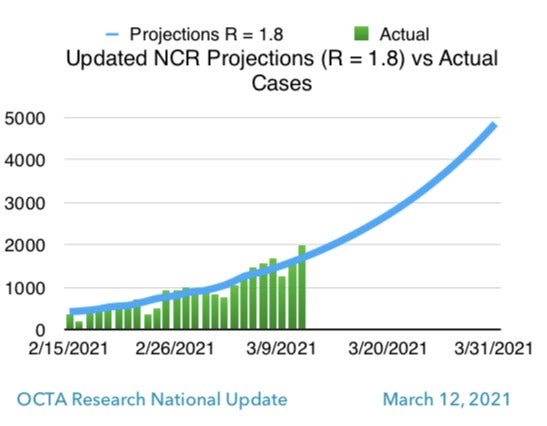 “It is important that the increase in new cases in the NCR be curbed in order to avoid a high number of new cases in NCR and to prevent overwhelming the hospital system of NCR and even the regions surrounding NCR (Cavite, Rizal, Bulacan),” it added.

Also, OCTA Research said that 12 local government units (LGUs) in NCR were among the Top 15 areas with increased infections, with the other two being Cebu City and Lapu-Lapu City in Central Visayas.

The following NCR LGUs, ranked by the average of new cases per day, are:

The surge within NCR has forced the Metropolitan Manila Development Authority to reinstate a region-wide curfew from 10:00 p.m. to 5:00 a.m., starting on Monday, March 15 — exactly a year after Metro Manila was placed on a strict lockdown due to growing COVID-19 cases.

On March 1, OCTA Research said Metro Manila is already having new and quicker surge of infections.

OCTA Research and other health experts believed that the upsurge may have due to undetected transmission of more infectious COVID-19 variants. To date, the Department Of Health said it has detected two of the three variants of concern in the Philippines — the B.1.1.7 or the United Kingdom variant, and the B.1.135 or the South African variant.