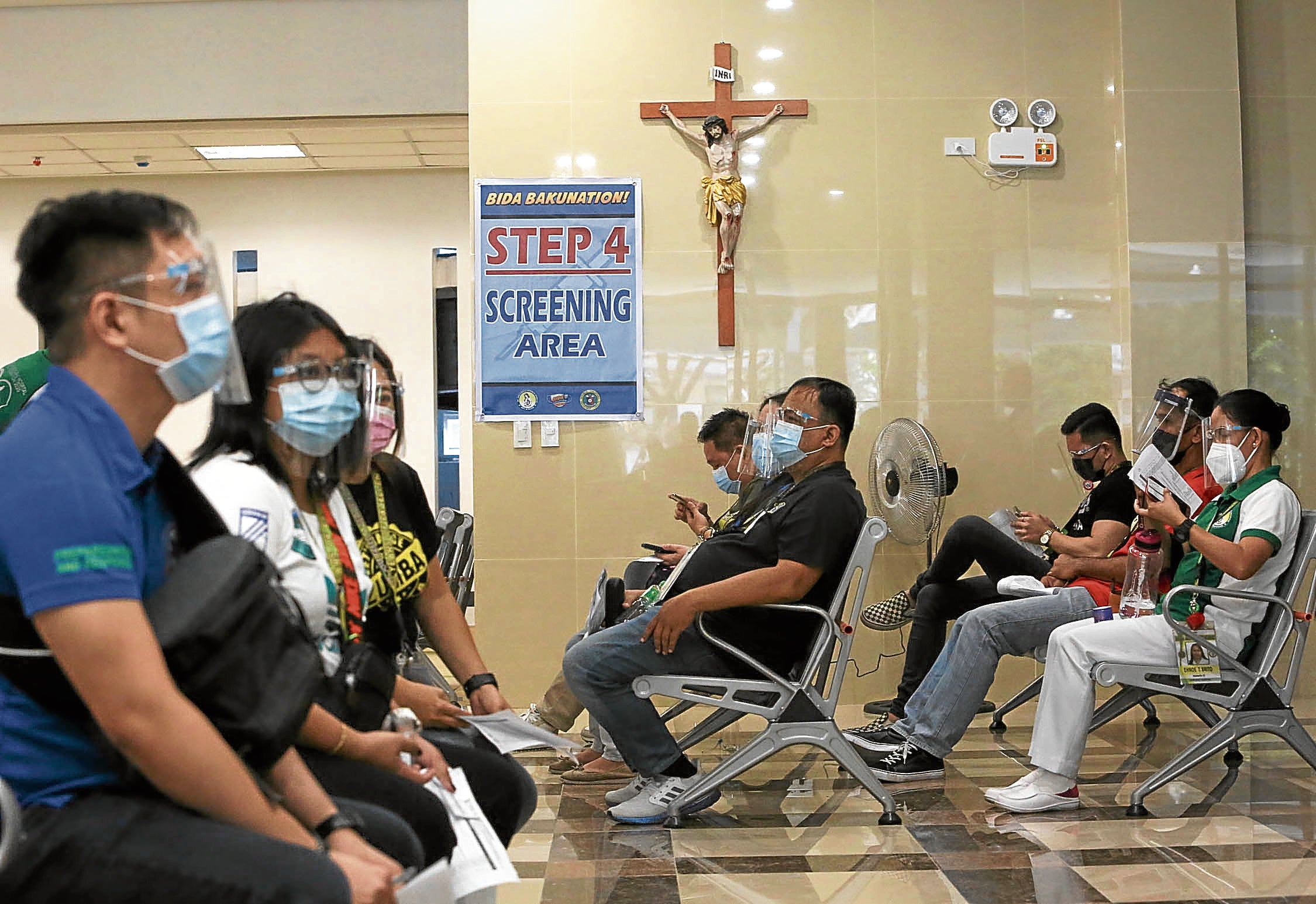 UP TREND Health workers await their turn to be inoculated againstCOVID-19 at Dr. Jose Fabella Memorial Hospital in Manila on Friday. The Department of Health reported the second highest daily uptick in infections since October last year.—MARIANNEBERMUDEZ

One of the country’s well-known epidemiologists who serves in a government body managing the pandemic said that new variants of the Covid-19 virus could be causing the surge in infections as the Department of Health (DOH) recorded 3,045 additional cases on Friday.

This is the second highest daily uptick in infections in five months after the government eased restrictions on travel, business establishments and mass gatherings.

At the Philippine General Hospital (PGH), one of three Covid-19 referral hospitals in Metro Manila, authorities noted 15 new infections among its staff in the first four days of March, nearly equal to the monthly total from December 2020 to February 2021, according to a document obtained by the Inquirer.

The Hospital Infection Control Unit (Hicu) of the PGH reported that 15 of its health-care workers acquired COVID-19 from March 1 to March 4, 10 of them from coworkers or from “eating together.”

The March 1 to March 4 figure compares with 15 in the whole month of December, 18 in January and 17 in February.

The report did not say what variants of the coronavirus had afflicted its 15 health-care workers (HCWs).

“Because of the observed surge in cases of HCW and patient admissions, we will be sending all positive swabs for genomic sequencing to the Philippine Genome Center (PGC),” the report said.

At an online press briefing, Dr. John Wong, a member of the technical working group on data analytics of the Inter-Agency Task Force for the Management of Emerging Infectious Diseases (IATF), said that “one evidence that the variants could be causing this surge is we detected the variants just before cases start to rise.”

“So there’s some indirect evidence that the variants are causing this surge,” he said. “We should encourage the public to take precautions.”

Wong was referring to the UK and the highly transmissible South African (SA) variants of SARS-CoV-2, the virus that causes the severe respiratory disease.

He said developments involving the new Covid-19 variants should be a cause for public concern.

“The number of cases you see now should not be seen as sort of the maximum number of people or patients who have the variant. There could be more than that,” Wong said.

It also said 42 additional cases with “mutations of potential clinical significance” in the ninth batch of 350 samples which the PGC sequenced.

It did not say when the samples were collected but that they came from Metro Manila, Central Visayas and returning overseas Filipinos (ROFs) “in response to the increased number of cases in these areas.”

Of the 52 SA variants, the DOH said 41 had “indicative addresses” in Metro Manila, while 11 were being checked to determine whether these were local or ROF cases. One has recovered, while the other 51 are still active.

There are now a total of 58 SA variant cases in the Philippines, with three who had recovered and 55 still active.

Of the 31 UK variant cases, 28 have addresses in Metro Manila while three are being checked to determine whether these are local or ROF cases. All 31 cases are active.

This brings to 118 the number of UK variant cases in the Philippines, of which 39 are still active, the DOH said, adding that there were 77 recoveries and two deaths.

Data from the DOH showed that for the SA variant, Metro Manila accounted for the highest number of cases (45), with 11 still being verified and two tagged as ROFs.

For the UK variant, Metro Manila also had the highest number of cases (29), followed by the Cordillera Administrative Region (25) and one case each in Calabarzon and Northern Mindanao, one foreign national and nine still being verified. There are 52 ROFs with the UK variant.

Wong cautioned that the rise in Covid-19 cases since last month should be “sufficient enough to get people to do more” in continuing to follow minimum health protocols.

“I am sure all of us, including the public, don’t want to go back to the days of modified enhanced community quarantine or ECQ. Our economy is struggling, we don’t want to hamper it more so

before hospitals are overwhelmed, we have to put in the preventive measures so that we prevent more cases and more hospitalizations,” he said.

The PGH Hicu releases monthly reports but it issued an “urgent update” on Thursday to “avert possible outbreaks within the different departments and offices in the hospital.”

Hospital authorities did not immediately respond to the Inquirer’s request for comment.

“Many of our exposures are from colleagues who came to work with symptoms. Quarantine of a large number of staff disrupt our hospital operations,” the Hicu said.

It noted that a number of staff went to the vaccination area while they were “acutely ill.” Workers who feel ill, it said, must not line up for vaccines with healthy coworkers.

Face-to-face meetings and queues are still allowed provided there is a 1-meter distance between persons attending, but meetings involving more than 20 people must be cleared with the administration office. Those eating together must maintain a 2-meter distance.

Joselle Ebesate, leader of All UP Workers’ Union and also a head nurse at PGH, told the Inquirer that the hospital opened another ward to accommodate more COVID-19 patients.

“Due to increasing admission of patients, PGH will open a charity ward dedicated for Covid patients which can accommodate 35 patients,” he said.

At the height of the infection, PGH had 10 units dedicated to Covid-19 patients. This was brought down to eight, six and now brought up to seven, Ebesate added.

The DOH said it removed eight duplicate cases from the total count, of which five were recoveries. Three cases previously tagged as recoveries were reclassified as deaths after validation.

The OCTA Research Group, which monitors trends in Covid-19 cases, said on Friday that the government should roll out its vaccination program in an urgent and efficient manner while the surge in cases in Metro Manila was still manageable.

At a press briefing, the group said the recent increase in cases is a “serious cause of concern,” especially with the detection of the more transmissible SA variant.

Professor Ranjit Rye said that it was important that health workers are vaccinated soon, and that testing, tracing and isolating must be expanded.

“AstraZeneca and Sinovac are the available vaccines that we have now and we encourage all our health-care workers to get vaccinated because they’re not just safe but also effective,” Rye said.

From Feb. 26 to March 4, the number of infections in Metro Manila averaged 900 cases per day—a 50-percent increase from the previous week, according to OCTA Research.

Barangay 76 in Pasay City is considered a hot spot due to the “rapid increase” of cases and OCTA Research’s Guido David said this was “very concerning.”

Back in August during the surge of cases in the metro, the highest number of cases logged in Pasay was 125 cases per day. Now the number has reached an average of 150 cases per day. —WITH A REPORT FROM NIKKA G. VALENZUELA