What's in a name? How WHO arrived at new name for COVID-19 variant B16172 | Inquirer News
Close
menu
search 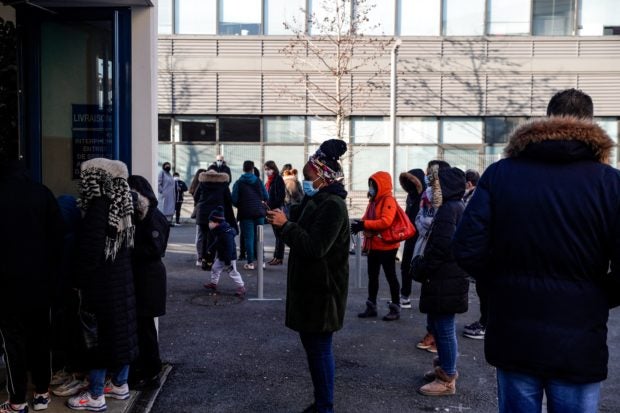 People queue for being tested for COVID-19 outside a municipal building on January 9, 2021 in Bagneux, a southern suburb of Paris, where a risk cluster of the mutant coronavirus variant has been detected. AFP FILE PHOTO

SINGAPORE — The use of the Greek alphabet to name Covid-19 variants was done after the consideration of other possibilities, such as numbering them “VOC 1”, a shorthand for “variant of concern 1”.

This option was thrown out as “VOC” sounded like a swear word when verbalized, Professor Dale Fisher, chairman of the World Health Organization’s (WHO) Global Outbreak Alert and Response Network, said.

He was speaking to The Straits Times on how the WHO had arrived on these new names, after questions swirled around how meaningful these names would be, given the lack of scientific basis behind them.

Some people also felt that the new names were confusing.

The public often associates variants with the nations where they were first detected, such as the “Indian variant” or “South African variant”, as these are easy to remember and refer to, Prof Fisher said.

This leads to some level of stigmatization, and the use of scientific names can also get confusing as they may sound similar to the names of the different mutations, he said.

Another option was to name the variants after the Greek gods, but way too many had been taken up in other places such as comics and movies, Prof Fisher added.

The WHO eventually settled on the use of the Greek alphabet. It contains 24 letters, but there is no plan yet on where to go next if they are exhausted.

These new names will not replace existing scientific names, but are aimed to help in public discussion, the WHO said.

Under the new system, the four variants of concern take on the following names: the hitherto so-called British variant B117 becomes Alpha; the B1351 first detected in South Africa becomes Beta, while the Brazilian P.1 becomes Gamma.

The so-called Indian variant B1617 is split into sub-lineages, of which the B16172 variant of concern becomes Delta.

Much effort was also put into the naming. Scientists and experts from areas such as virology, as well as representatives from the Global Influenza Data Initiative, were part of the group that convened to discuss the naming.

Time will tell if these new names stick.

Prof Fisher recalls how when “Covid-19” and “Sars-CoV-2” were introduced in February last year – to name the disease (Covid-19) and the virus (Sars-CoV-2) – many people felt they were cumbersome and tough to remember.

But fast forward to today, these names roll off the tongue so easily and have clearly caught on, said Prof Fisher.

The virus was initially referred to as the “Wuhan virus”, since it was first detected in Wuhan, China.

The use of names will also depend on who the audience is, Prof Fisher said.

“Within the scientific community, scientific names like B16172 will likely still be used. But for communication with the general public, using the Greek alphabet might be easier,” he said.

Read Next
Food safety: How not to die or get sick while eating
EDITORS' PICK
Tulfo questions BIR for going after online sellers instead of oil smugglers
SRA chief Serafica resigns following sugar importation mess
Unleash the photographer in you this World Photography Day with vivo smartphones
House energy committee chair Arroyo bats for cheap electricity
The TECNO Camon 19 Series Philippine launch
Can’t control ‘ukay-ukay’ imports? Tulfo proposes legalizing it for taxes
MOST READ
Cherie Gil’s daughter on partying after mom’s death: ‘I’m grieving but it’s not my job to show you that’
LOOK: Mavy Legaspi gifts Carmina Villaroel with Hermes bag on her birthday
Tulfo grills BIR, BOC for going after online sellers instead of oil smugglers
Three cops arrested for alleged extortion
Don't miss out on the latest news and information.