BA.5: Another Omicron sub-variant and its impact on PH recovery | Inquirer News

BA.5: Another Omicron sub-variant and its impact on PH recovery 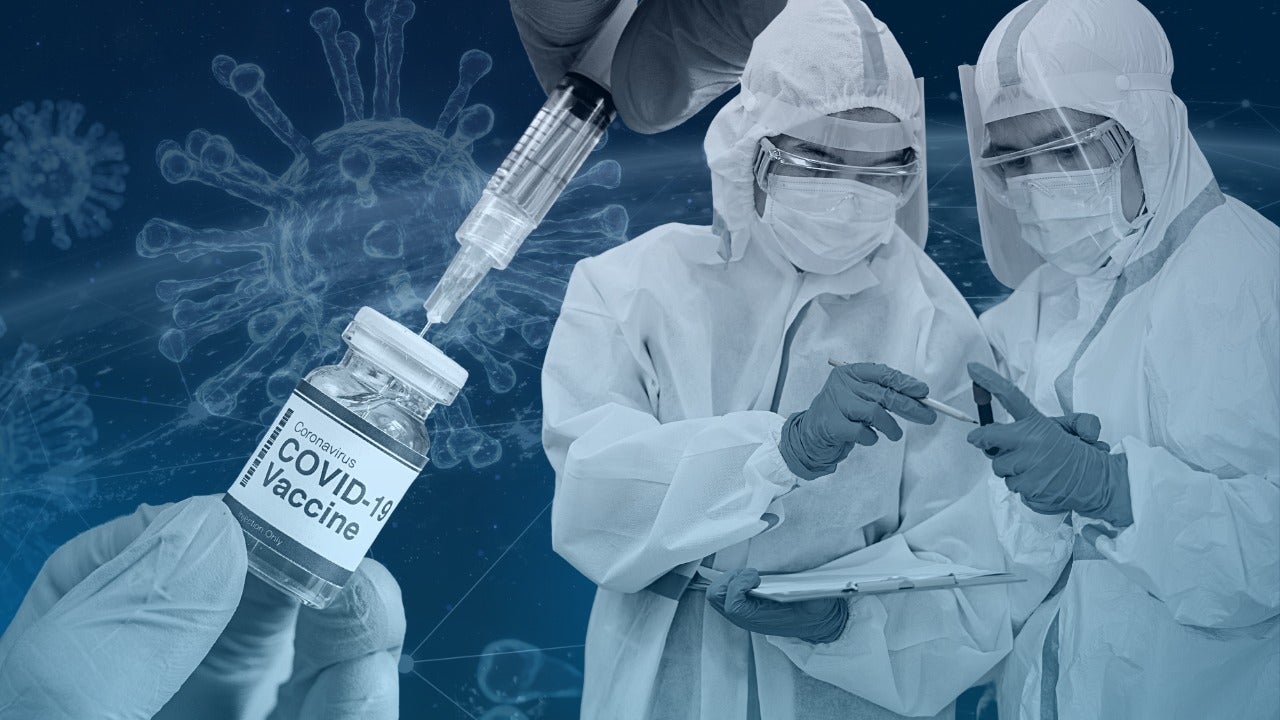 MANILA, Philippines—The Philippines, late last year, was already easing its restrictions as COVID-19 cases fell—from 22,820 on Sept. 9 to 168 on Dec. 21—but as the Omicron variant triggered a new surge in cases, restrictions were heightened again.

The rise in cases early this year, which hit 32,246 on Jan. 12, has disrupted the workplace, with businesses reducing operations as more employees called in sick—most testing positive for the Omicron variant of SARS-Cov2, the virus that causes COVID-19.

COVID-19 cases eventually fell as vaccination rates rose, but last April 6, the World Health Organization (WHO) warned of a new surge following the May 9 campaign and elections in the Philippines, which drew crowds to congested indoor spaces.

READ: WHO warns of new COVID surge in 2 months, urges PH to prepare

It was on April 1 when Dr. Rontgene Solante, a specialist on infectious diseases, said election-related activities and “waning immunity” of people who have yet to get booster shots could trigger the rise in cases. 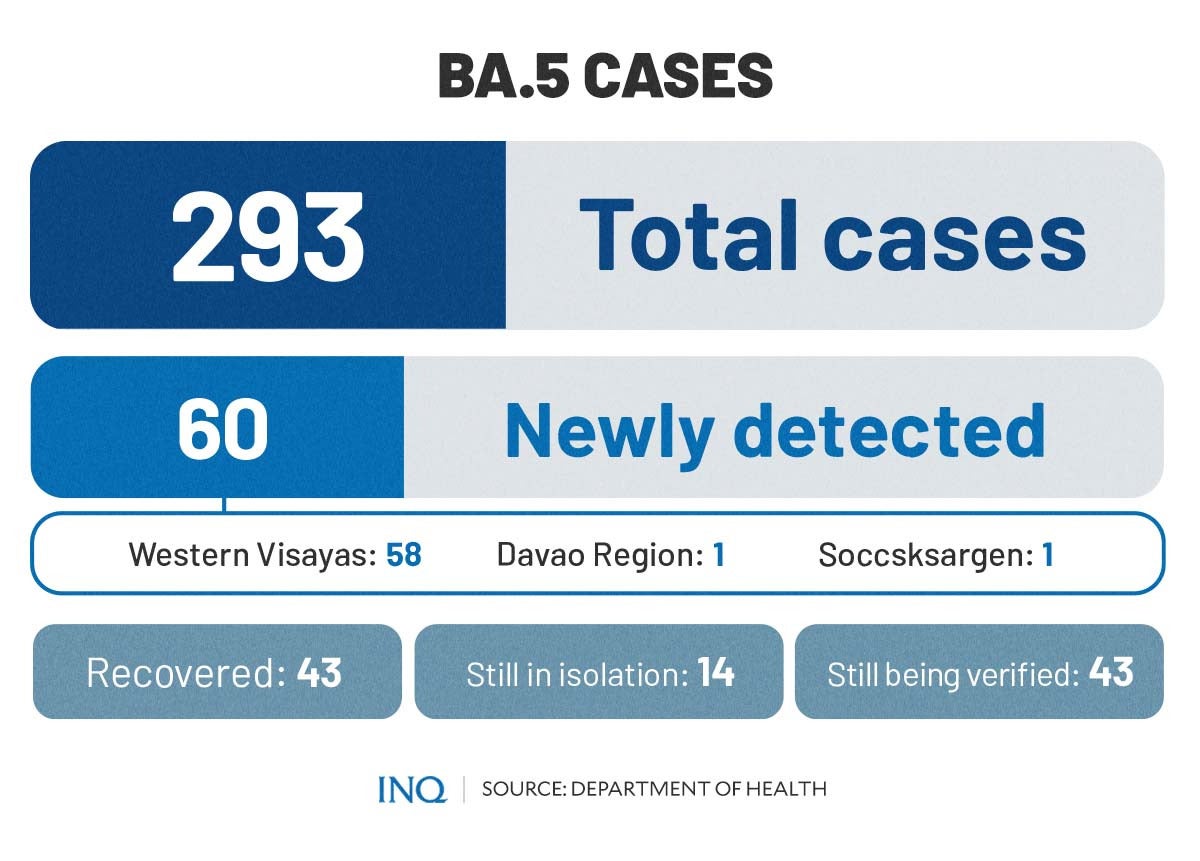 Two months later, he said the public should be ready for new and more transmissible sub-variants of Omicron: “The presence of these lineages […] It’s for us to be ready with our way of preventing it from being transmitted easily.”

Back then, Solante was referring to BA.4, which originated from South Africa, and BA.2.12.1, which was then becoming the dominant sub-variant in the United States.

He said “monitoring is very important now since we now have two of these lineages that are considered to be highly transmissible and can also evade protection from COVID-19 vaccines.”

Then on June 4, the Department of Health (DOH) said the BA.5, another Omicron sub-variant, had already been detected in the Philippines as two individuals “from the same household” in Central Luzon tested positive for the virus.

The department said both individuals, who are fully vaccinated with booster shots, had colds and cough as symptoms. They are no longer symptomatic and had already been tagged as recovered. 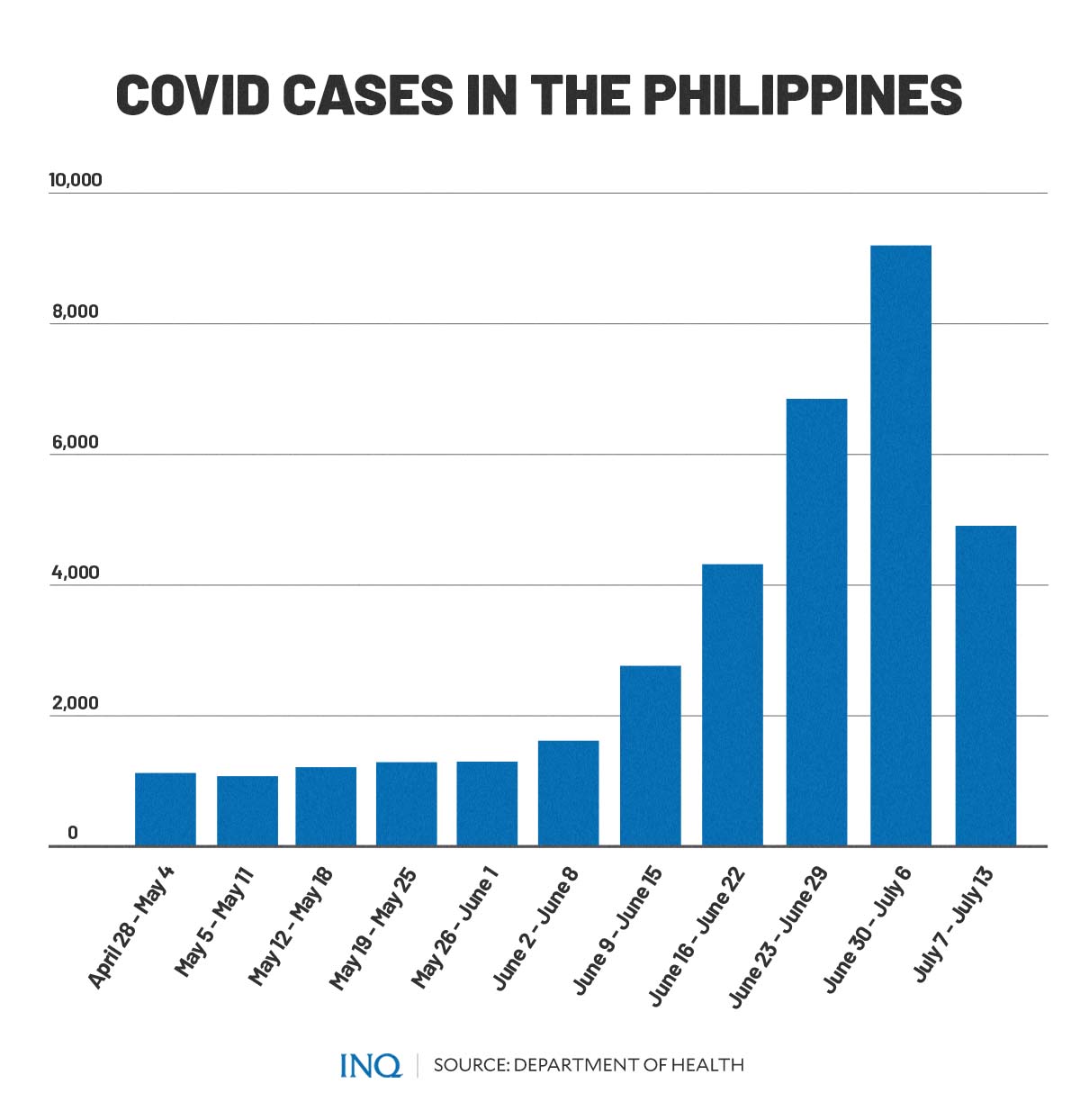 Health Undersecretary Maria Rosario Vergeire said on Tuesday (July 12) that based on the DOH’s latest sequencing run, there are now 293 cases of BA.5 infections as 60 of the 79 new Omicron sub-variant cases were BA.5, 17 were BA.2.12.1 and two were BA.4.

Out of the 60 BA.5 infections, 58 were in Western Visayas, while Davao Region and Soccsksargen have one each. Vergeire said 43 of the patients had already recovered, 14 are still in isolation, while three are still being verified.

Dr. Tony Leachon, the former special adviser of the National Task Force Against COVID-19 said over dzRH that given BA.5’s “highly transmissible and evasive” characteristics, the strain is the “most dangerous” yet.

“This BA.5 is the most evasive to our immunity. This is why even if we have primary vaccines, we still need to boost up. Because it is highly transmissible than the other variants, this is the most dangerous sub-variant today,” he said.

Leachon, who stressed that there should be no room for complacency, said the BA.5 could be the reason for the resurgence of COVID-19 cases: “It will drive another surge because of waning immunity, but this time, it will be manageable.”

He described the sub-variant as distinct and highly transmissible than any previous variants of SARS-Cov2, saying that since it is “evasive,” it could really slip past a person’s immune system.

With the rise in COVID-19 infections, the National Capital Region Police Office (NCRPO) said on June 23 that a stricter implementation of COVID-19 restrictions can be expected in Metro Manila.

Maj. Gen. Felipe Natividad, NCRPO director, issued the statement as DOH data showed then that COVID-19 cases in the country from June 13 to June 19—which was 3,051—was 82 percent higher than the previous week.

Based on the latest data on weekly growth rate, Dr. Guido David, an Octa Research fellow, said COVID-19 infections in Metro Manila “may be close to peaking or may have already peaked.” 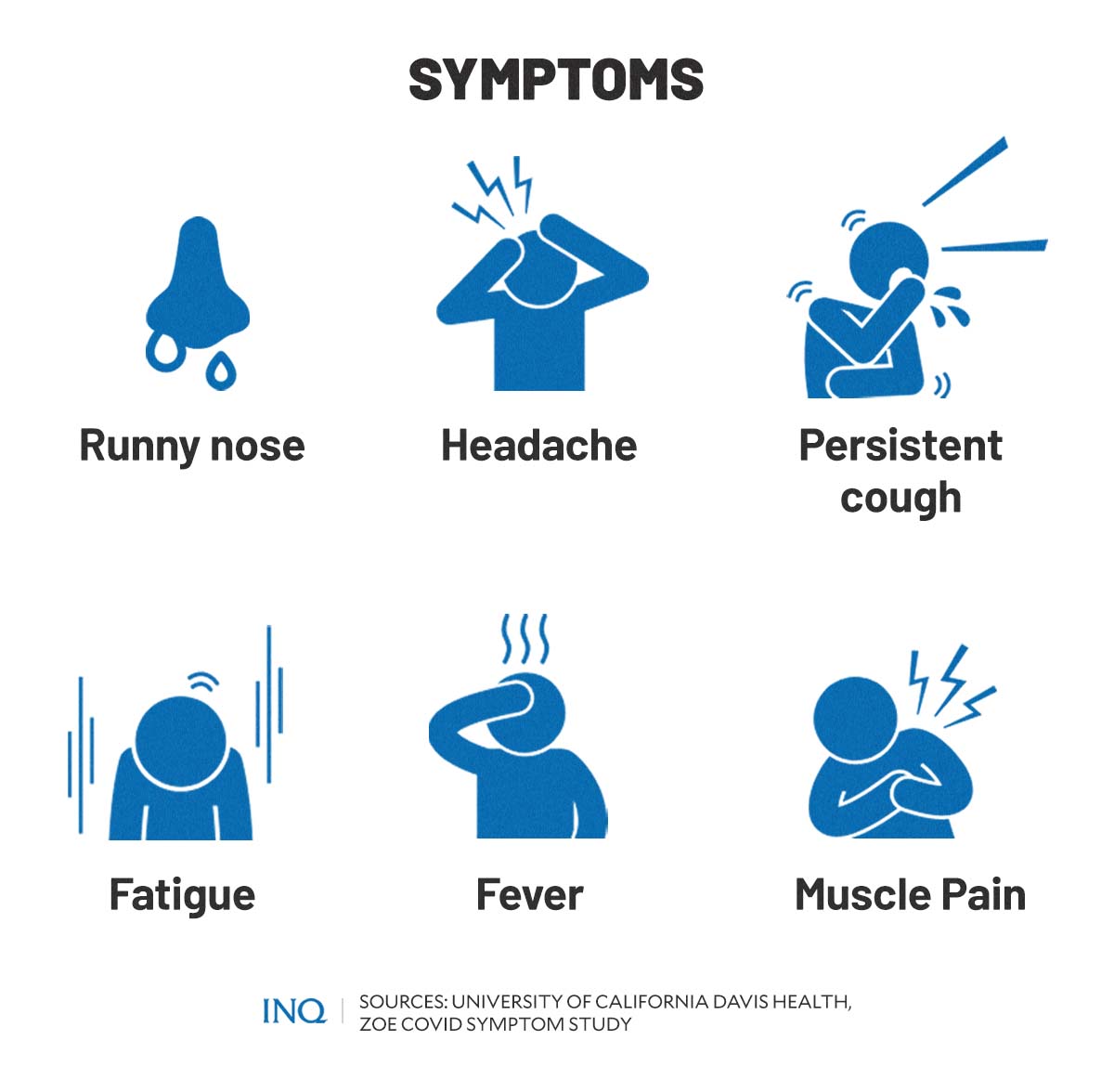 However, while “the indicators show a slowing down of the growth rate in cases and there is a chance that cases in the NCR are peaking or have already peaked,” Guido stressed that “the trends should be clearer after a week.”

Last July 1, Guido said new COVID-19 cases in Metro Manila “could be peaking soon, maybe by first or second week of the month.” He clarified then that a positive growth rate means that COVID-19 cases are still increasing.

When the Omicron variant triggered a new surge in cases early this year, businesses had been disrupted, with offices and malls reducing operations. Even airlines then had been forced to cancel flights as more employees called in sick.

This, as the Inter-Agency Task Force for the Management of Emerging Infectious Diseases issued updates on the quarantine and isolation protocols for the general public and health care workers.

Based on the Guidelines on the Nationwide Implementation of Alert Level System for COVID-19 Response, a 14-day quarantine from the day of exposure should be observed by an asymptomatic close contact who is partially or not yet vaccinated.

For confirmed cases, isolation ranges from seven to 21 days, depending on the patient’s vaccination status and the severity of symptoms—moderate, severe, and critical—and if the patient is severely immunocompromised.

The World Bank said in 2021 that from July to November 2020, 67 percent of businesses saw a cut in sales because of limited operation (58 percent) and inability of customers to come to establishments (38 percent).

While work-from-home (WFH) arrangements were implemented to cope, especially with the COVID-19 lockdowns, a study from Mapua University investigated the effects of WFH arrangements on the productivity of workers.

Written by Jon Pauline Ramos and Yogi Tri Prasetyo, the research found that “WFH Factors” has significant positive effects on “Job Satisfaction (0.546 effect)” and “Productivity (0.274 effect),” but it does not affect “Job Stress”.

NBC News explained that BA.4 and BA.5 are four times more resistant to antibodies from vaccines than BA.2, which replaced Omicron as the dominant sub-variant of SARS-Cov2 in the US last April.

The United Kingdom reported that in recent cases of COVID-19, most patients experienced “runny nose, headache, persistent cough and fatigue as most common symptoms.”

Based on data from the ZOE COVID Symptom Study, less than one-third of people had fever. The University of California Davis Health said BA.5 symptoms are similar to previous variants’.

Despite the rise in cases, Leachon asked the public not to panic as the infections and health care utilization rates are still manageable: “We’re still under control but we need to raise the red flag or sound the alarm bells.”

This was why the country needs to intensify its booster program, he said, stressing that since BA.5 is highly transmissible than previous sub-variants, “even if you’re already vaccinated, you still need to boost up.”

RELATED STORY: Threats vs the unvaxxed: The failure to see realities