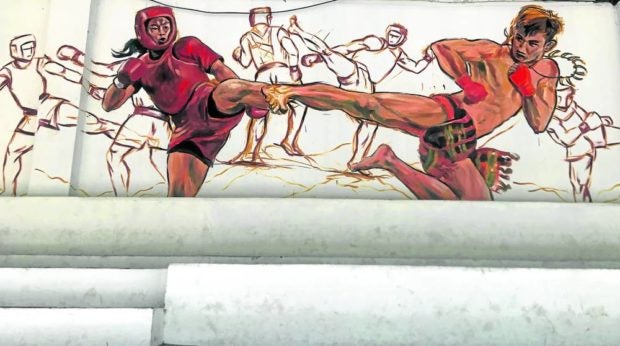 BAGUIO CITY, Benguet, Philippines —Some of the country’s most accomplished athletes on Wednesday visited a “Wall of Heroes” that is taking shape at the Athletic Bowl in Burnham Park here to see how their giant portraits have turned out.

The mural project, which was inaugurated on Wednesday, memorializes 32 sports legends who have deep roots in Baguio City and the Cordillera region.

The portraits lining the walls and dugouts of the Athletic Bowl grandstand are painted by local artists Ged Alangui, Gladys Anne Labsan and Harold Banario, a mixed martial arts (MMA) fighter of the Crodillera’s Team Lakay. Banario is the son of incoming Mayor Dario Banario of Mankayan, Benguet.

They were commissioned by the “Wall of Heroes” project group that has showcased the city’s sports legends through exhibits for the past nine years, said project coordinator Pigeon Lobien.

Among the heroes on the wall are portraits rendered by Labsan of the late sportswriter Narciso Padilla, who had created a local sports awards program for Baguio athletes. 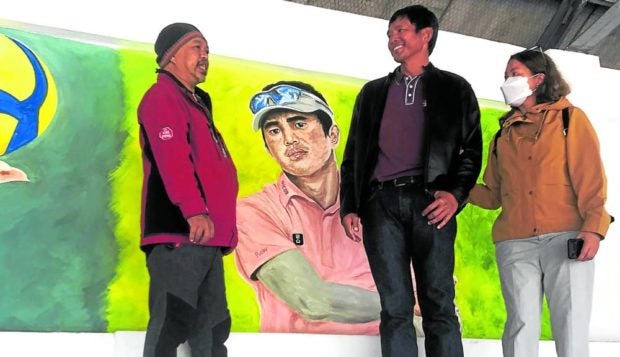 ROLE MODELS Outstanding athletes who have deep roots in Baguio City and the Cordillera are being memorialized in a series of murals by homegrown artists Ged Alangui, Gladys Anne Labsan, and Harold Banario at Burnham Park’s Athletic Bowl. Veteran golfer Mars Pucay (center) and his wife visit his portrait on the “Wall of Heroes” and met artist Alangui on Wednesday. —(Photo by VINCENT CABREZA / Inquirer Northern Luzon)

She also drew sports patron Fernando Bautista, whose family-owned University of Baguio has been granting scholarships to athletes who relocated to the summer capital for months of training. Professional athletes, who compete in local and international games, prefer training in Baguio because of its high altitude.

Tony Candelaria, a businessman who used the screen name Tsing Tong Tsai as an actor in Filipino martial arts movies in the 1970s and 1980s, is also on the wall for helping develop and popularize Baguio’s wushu program.

Alangui, who has been associated with Tam-awan Arts Village, said it took him 26 days to complete the images of Pucay and nine other athletes.He worked for four to five hours each day to take advantage of the natural light while perched on a narrow ledge.

Archer Kareel Meer Hongitan, gold medalist in the 6th Southeast Asian Archery Championships in 2017, took photos beside her portrait, which features her taking aim with a bow and arrow.

Pucay posed beside his portrait that shows him taking a swing in one of his tournaments.Alangui also worked on a portrait of the late Gerardo Verzosa, former manager of the Benguet Electric Cooperative, who used to play college basketball for the Ateneo Blue Eagles.

Lobien said there had been some interest in the works of Banario. The MMA fighter’s assignment involves 10 contact sports medalists like former karate champion Rey Hilario, kickboxer Jean Claude Saclag, muay thai champion Brent Velasco and Rifani, who has been teaching high school in the city.

The mural is Lobien’s latest memorial project, which was supposed to have started in 2020 but was shelved when the coronavirus pandemic broke out. It resumed in April, financed by the Bureau of Copyright and Related Rights of the Intellectual Property Office of the Philippines.