BAGUIO CITY, Benguet, Philippines — Imelda Cadaweng, a Baguio-based weaver who hails from Mountain Province, has matched a terra-cotta art piece rendered by Luisa Galang with a woven tapestry that is on display at the University of Baguio.

Cadaweng belongs to a group of weavers trying their hands at producing woven art for a project called, “Art Weave,” which features handwoven tapestries that interpret nine paintings being exhibited at this year’s crafts show, “Mandeko Kito” (Ibaloy for ‘Let’s sell’).

In a video documentation, Cadaweng admitted being a little apprehensive about producing a companion tapestry for Galang’s piece, which has snake-like terra cotta heads leaping off the canvas. With the help of fellow weaver Leticia Bacolong, Cadaweng’s “translation” was a brown woven textile embossed with cartoon-like brown heads attached to elongated necks.

Near her exhibit loomed a giant blue canvas with a stark, three-dimensional orange tree made of beads. This mixed-media painting by Julius Lumiqued was matched with a warm blue ikat shawl with its own orange beadwork that was produced by weaver Jane Kis-ing.

Maria Rosalina Wanget, originally from Tadian town in Mountain Province, said she used to produce home decor. Her companion piece to a multicolored and multilayered portrait of a Cordillera house by Hermie Bruno was a comparatively intricate tapestry of a traditional mountain abode.

The fusion of weaving and contemporary art in the exhibition was the brainchild of fashion designer Twinkle Ferraren, who believed it would open a new market for struggling weavers, said John Arvin Molintas, who serves as the executive director of the Baguio Arts and Crafts Collective Inc. (BACCI).Like many Baguio craftspeople, major artists and even performing bands, weavers like Cadaweng suffered gravely during the two years of quarantine after the COVID-19 pandemic broke out in 2020. Health and travel restrictions barred tourists who were their major customers. 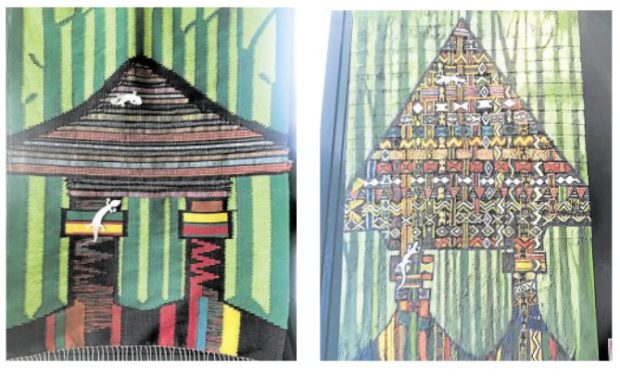 COLLABORATION Baguio City-based weavers interpret nine paintings for the “Art Weave” project. Among these are Rosalina Wanget’s tapestry of a Cordillera house (above left) which is her interpretation of the painting rendered by Hermie Bruno. The mixed-media painting “Teatro Demagogue” (top right) by Luisa Galang got a handwoven interpretation from weavers Imelda Cadaweg and Leticia Bacolong. —PHOTOS BY VINCENT CABREZA

“I have been weaving only for the past two years. I learned [the craft] years ago but I never practiced it seriously. But I decided to pursue the craft and earn a living instead of sitting idly during the pandemic,” she said. Cadaweng described her skills as “simple” and rudimentary.

Introducing traditional weavers to more popular forms of art like paintings may inspire them to create new designs for woven textiles, Molintas said. Most of their products are indigenous blankets and table tops, so Ferraren realized that art expressed through loom and backstrap weaving may attract new customers and increase the value of their work, he said.

“The pressure upon Cordilleran weavers is great because they are working to meet the needs of all the different agencies surrounding them, and they are also facing the demise of their culture and tradition,” according to the book, “Cordillera Textiles,” the initial output of the University of the Philippines Baguio’s multidisciplinary Cordillera Textiles Research Project (CordiTex). 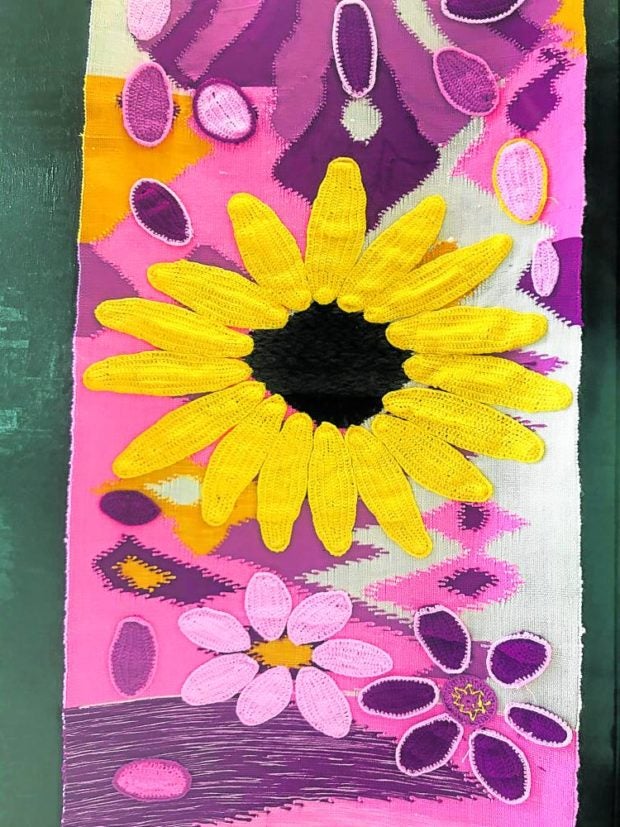 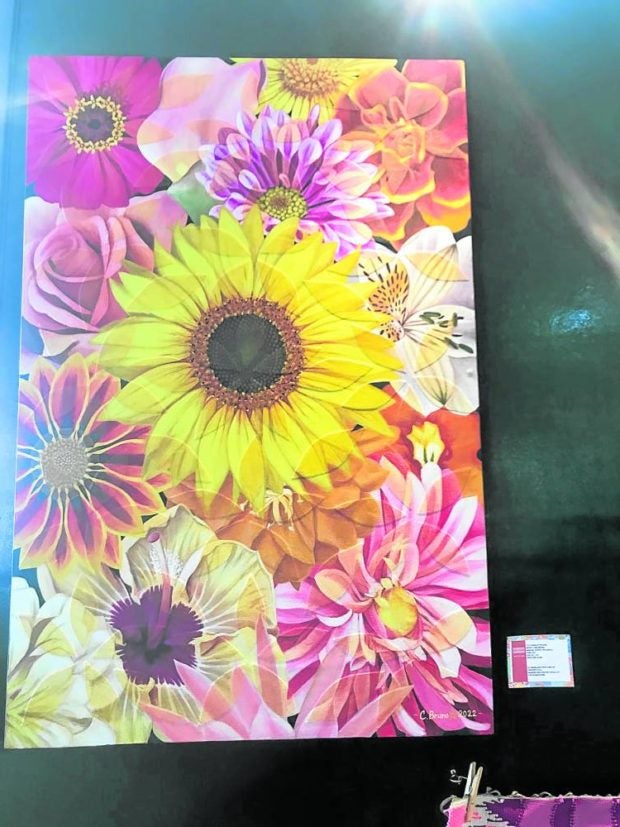 Weaver Leticia Ba- colong’s woven version of Carla Jose’s “Benguet Bloom” is among the most colorful and cheer- ful pieces in the exhibit. —PHOTOS BY VINCENT CABREZA

CordiTex has begun a digitization process to preserve weaving designs thought long extinct, but which were discovered in the archives of other countries. These old and forgotten designs are being reintroduced to modern weavers as a way of prolonging the craft.

BACCI was formed after the summer capital became the country’s first city to join the World Creative Cities Network in 2017. The network organized by the United Nations Educational, Scientific and Cultural Organization is composed of cities with active creative economies (artists and craftspeople who generate revenues for their respective cities).Baguio was picked for its folk arts and crafts—among them woodcarvers, silversmiths and weavers who have supplied Baguio’s souvenir shops since the 1950s. The city is also home to national artists like filmmaker Kidlat Tahimik and painter BenCab (Benedicto Cabrera). 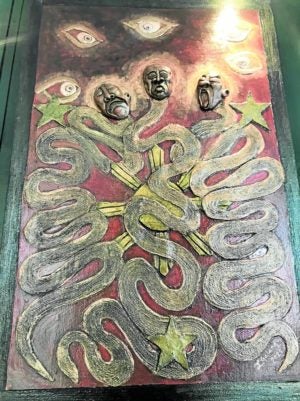 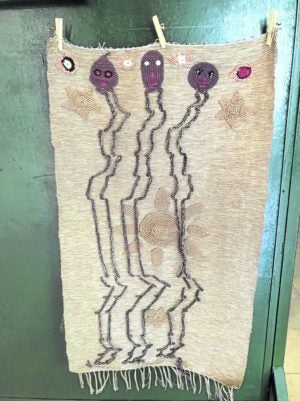 Galang and Lumiqued are among the eight veteran and rising artists who took part in Art Weave. Also in the group are Venazir Martinez, Fara Manuel Nolasco, Hermie and Cara Bruno, Taipan Lucero, and Maela Liwanag Jose.

BACCI has been exploring other crafts, said BACCI president and former UP Baguio chancellor Raymundo Rovillos, who cited plans for a silvercraft exposition and an ethnic jazz concert to popularize Cordillera rhythms.