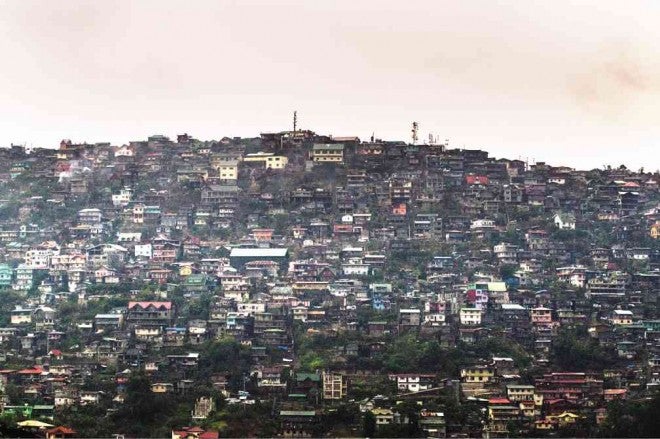 THE QUIRINO Hill community in Baguio City could soon be a work of art if residents there allow artists to convert their homes into a canvas for a mountain art wall, as envisioned by a tourism official. RICHARD BALONGLONG/INQUIRER NORTHERN LUZON

LA TRINIDAD, Benguet—If everything goes as planned, artist Jordan Mang-osan would make all houses on the mountainside community called “Stone Hill” here part of a living canvas painted with sunflowers and limestone.

Sunflowers used to dominate this section of the La Trinidad Valley before it became inhabited, Mang-osan said.

Mang-osan and artists of the Baguio art group, Tam-awan Village, have been tapped by a government tourism official, who intends to transplant a copy of the Santa Marta Favela of Rio de Janeiro in Brazil in Stone Hill, and in settlements in Baguio’s heavily populated Quirino Hill.

Marie Venus Quinto-Tan, Cordillera regional director of the Department of Tourism, tried to sell the idea of converting this huge wall of mountainside homes into a giant mural when she met La Trinidad’s officials on Tuesday.

When asked, Tan said the proposal is part of the Baguio-Boracay redevelopment plan to revitalize these two tourist destinations. She said it would beautify these areas and provide new attractions that would draw interest in Baguio and its neighboring Benguet communities.

Favelas are low-income, crime-plagued slum communities of Brazil until that country’s government began a process of “pacification” to force out drug lords and gangs from these neighborhoods.

The favela revitalization emboldened Dutch duo Haas and Hahn (composed of artists Jeroen Koolhaas and Dre Urhahn), aided by a local crew, to convert the entire hill settlements of the Santa Marta favela into a mural of vibrant colors, backed by a crowd-funding campaign in 2013, according to the website www.favelapainting.com.

La Trinidad Mayor Edna Tabanda said her initial impression about the proposal was that it would beautify Stone Hill, which is the gateway to La Trinidad.

The Stone Hill houses, along the Balili River, are the first structures tourists see once they pass the Bell Church in the boundary of Baguio and La Trinidad.

Ultimately, the government will need to get all house owners to agree to the proposal, although the idea was sound, said Saturnina Wanawan, who heads the Balili village council’s committee on environment and tourism.

Tan said she has negotiated a deal with two paint manufacturers, which would donate the resources needed to create the two complementary art walls in Stone Hill and Quirino Hill before the staging of the 2016 Panagbenga or the Baguio Flower Festival.

The government has not yet presented the Baguio portion of the Baguio-Boracay redevelopment plan which President Aquino had commissioned, when he issued Memorandum Circular No. 47 to create a technical working group to rejuvenate the “two vital national assets.”

But Tan outlined some more projects before the Cordillera Regional Development Council (RDC) that fulfill some conditions set by the plan, said Edilberto Carabbacan, RDC infrastructure committee chair, during an Aug. 12 news conference.

Carabbacan, who is the Cordillera director of the Department of Public Works and Highways, said Tan proposed to plant bright, colorful flowers in downtown Baguio as part of her “Rev (or Revitalize) Bloom Baguio” campaign.

The RDC also looked into “out-of-the-box” solutions for sustaining the tourist-drawing rice terraces in Ifugao province because young farmers have been abandoning their clans’ terraces.

Carabbacan said an option was to invite donor companies to adopt a terrace and raise subsidy funds so farmers would continue planting rice without raising capital. With a report from Vincent Cabreza, Inquirer Northern Luzon