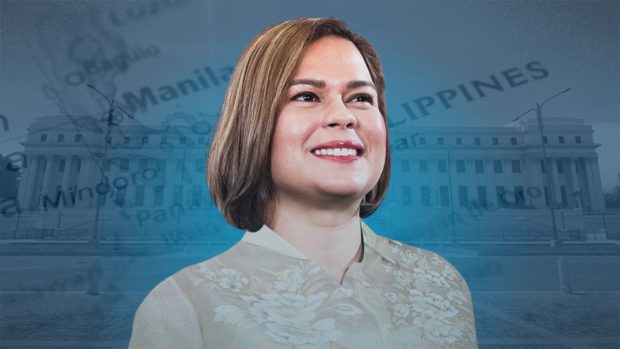 MANILA, Philippines—“The days ahead of us may be full of challenges that call for us to be more united as a nation. But let me reiterate this — we can never go wrong if we are a people dedicated to honoring the will of God, to serving our country and our fellowmen, and protecting the integrity of our families and the future of our children.”

That was a portion of Vice President-elect Sara Duterte-Carpio’s speech she delivered last June 19 at ceremonies for her inauguration as the 15th vice president of the Philippines.

READ: We can’t go wrong if we serve our country – Sara Duterte

The presumptive vice president took her oath of office weeks ahead of President-elect Ferdinand “Bongbong” Marcos Jr.’s oath-taking—which will be held on June 30 at the National Museum of Fine Arts.

Like outgoing Vice President Leni Robredo, Sara made history by breaking years of vice-presidential inauguration traditions in the country.

In this article, INQUIRER.net will take a closer look at what has changed in the traditions and rituals followed at the inauguration of previous vice presidents and look back at some of the key moments during the oath-taking of past vice presidents of the Philippines. 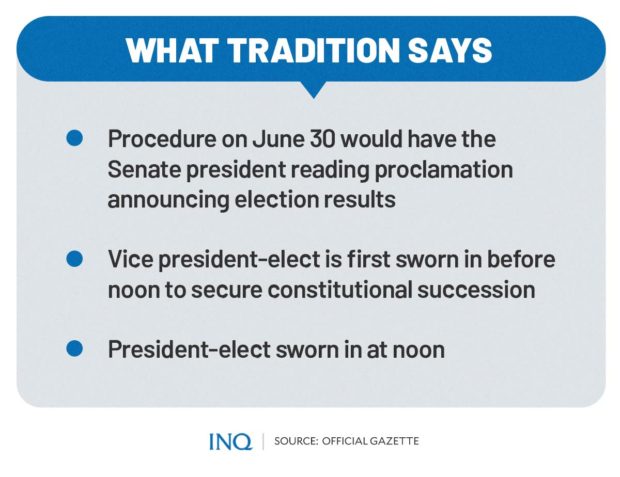 However, Sara decided not to follow this longstanding tradition—similar to Robredo in 2016—and had her inauguration ceremony held in her hometown Davao City.

In yet another break from tradition, the vice president-elect was sworn into office over a week ahead of Marcos Jr.

Article 7 Section 4 of the 1987 Constitution stated that the term of the newly-elected president and vice president “shall begin at noon on the thirtieth day of June.”

The presumptive vice president’s decision raised the question of whether an early oath-taking—days or weeks before June 30—is allowed under Philippine laws.

“It’s called ‘oath of office,’ Technically, [Sara] should not take it until the office is vacant,” Christian Monsod, lawyer and member of the 1986 Constitutional Commission, told Vera Files.

However, for former University of the Philippines (UP) College of Law dean Pacifico Agabin, there is nothing unlawful with the vice president-elect’s early oath-taking.

“What the Constitution says is that the president and vice president should take their oath before assuming office,” Agabin said in a radio interview. 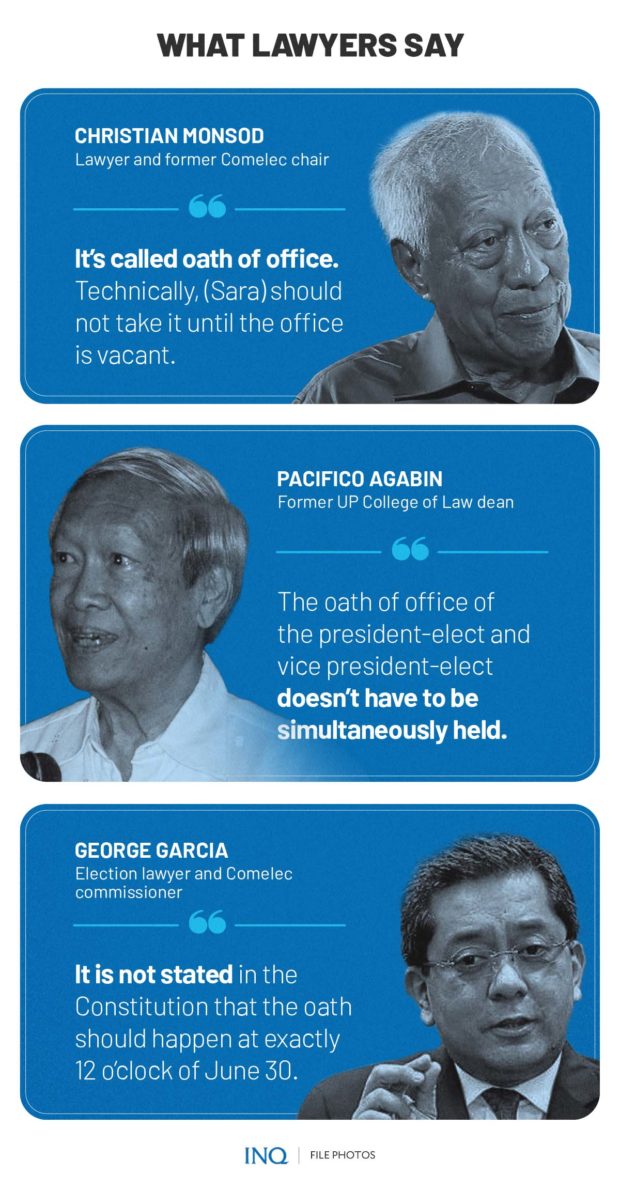 Commission on Elections (Comelec) Commissioner George Garcia said that the poll body does not see a problem with Sara holding her inauguration on June 19, even if the 1987 Constitution states that she can only assume office on June 30.

“It is not stated in the Constitution that the oath should happen at exactly 12 o’clock of June 30,” he said in a press conference.

“As long as, number one, you will only officially assume your post at exactly 12 o’clock on June 30 and number 2, the content of your oath should be what is stated in the Constitution,” he added.

READ: Comelec: ‘No problem’ with Sara Duterte’s inauguration as VP ahead of June 30

To be sworn into office before June 30, said lawyer Michael Yusingco, is “not expressly prohibited by law and the Constitution.”

“But if the incoming VP perform[s] acts as if she was already the VP before noon of June 30, then those acts can be challenged in court,” Yusingco told Vera Files.

In 1992, when Ramos was sworn into office, then vice president-elect Joseph Ejercito Estrada took his oath of office at the Quirino Grandstand in Manila. 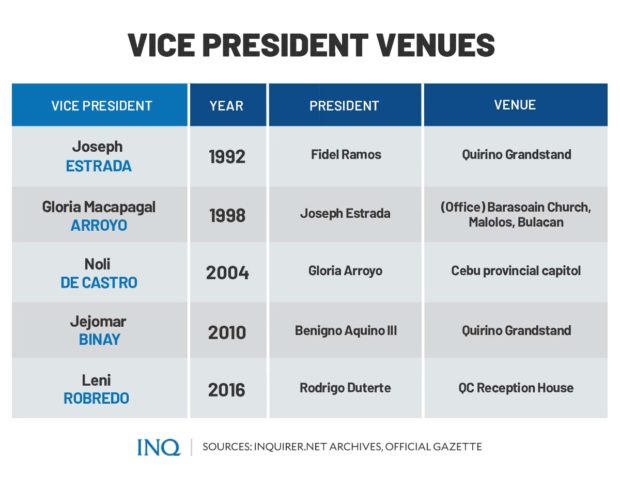 Under Arroyo’s term as president in 2004, former Vice President Noli de Castro was inaugurated at the Cebu Provincial Capitol in Cebu City.

Former Vice President Jejomar Binay took his oath of office in 2010 at the Quirino Grandstand, a few moments before Benigno “Noynoy” Aquino III was inaugurated as president.

In 2016, Robredo took her oath as the 14th vice president of the Philippines at the Quezon City Reception House.

READ: Duterte does not want joint inauguration with Robredo–VP’s camp

Traditionally, only the president-elect gets to deliver an inaugural speech after taking an oath. This, however, changed in 2016 when Robredo had a separate oath-taking ceremony.

After being sworn into office, Robredo delivered her inaugural message—in which she reminisced her election journey, remembered her late husband former Interior Secretary Jesse Robredo, thanked the public and her supporters, and detailed her plans and programs for her six-year term as vice president.

Her inaugural address was around 841 words and was delivered within 11 minutes and 43 seconds.

In her recent oath-taking, Sara delivered her inaugural speech. She acknowledged the 32.2 million Filipinos who supported her run as vice president during the May 9 elections and mentioned the issues and “conflict and uncertainties” that hound Filipino children’s “very complex” future.

Her speech was 823 words long and lasted for about 11 minutes and 25 seconds.

Throughout the years, there have been several instances when vice presidents were inaugurated as presidents even before their six-year term ended and took oath as the country’s new president.

Under the 1987 Constitution, “in case of death, permanent disability, removal from office, or resignation of the President, the Vice-President shall become the President to serve the unexpired term.” 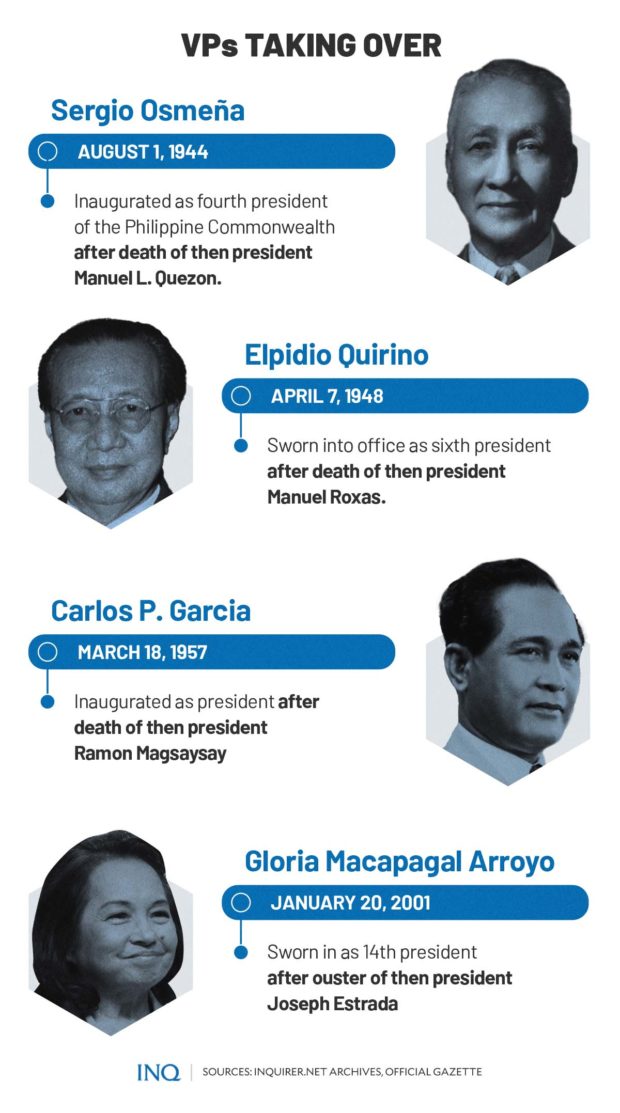 On Aug. 1, 1944, then Vice President Sergio Osmeña was inaugurated as the fourth president of the Philippine Commonwealth under the United States—under extraordinary circumstances.

The inauguration occurred following the death of former President Manuel L. Quezon. Osmeña’s only term as president lasted for only almost two years.

On April 17, 1948, former Vice President Elpidio Quirino was sworn into office as the sixth president of the Philippines under extraordinary circumstances, following the death of former President Manuel Roxas.

Former Vice President Carlos P. Garcia was also inaugurated under extraordinary circumstances on March 18. 1957, after then-President Ramon Magsaysay died after a C-47 Skytrain transport aircraft—where Magsaysay was on board—crashed on an island in Cebu on March 17.

After Estrada was removed from office during the second Edsa people power in 2001, Arroyo was inaugurated as the 14th president of the Philippines. Like her predecessors, her oath-taking also took place under extraordinary circumstances.