'THE INAUGURATION WAS FREE OF VIOLENCE DUE TO THE WELL-PLANNED MEASURE,' SAYS DANAO
By: Gabriel Pabico Lalu - Reporter / @GabrielLaluINQ
INQUIRER.net / 05:02 PM June 20, 2022 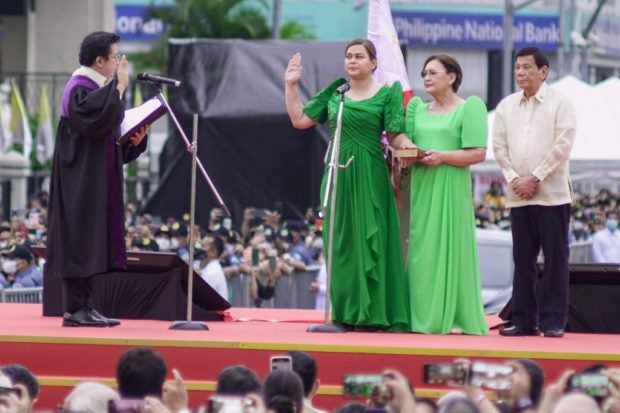 MANILA, Philippines — The inauguration of Vice President-elect Sara Duterte-Carpio last Sunday was generally peaceful and devoid of any untoward incidents, and the Philippine National Police (PNP) is now training its sight on the inaugural of President-elect Ferdinand “Bongbong” Marcos Jr. at the end of the month.

According to PNP officer-in-charge Lt. Gen. Vicente Danao Jr., the occasion was free of violence due to the coordination between law enforcement agencies and the well-planned and executed security plan.

Duterte-Carpio, daughter of outgoing President Rodrigo Duterte, took her oath of office in her hometown Davao City, a few days before she would have been legally.

“As the PNP considers this as a major activity, it is worthy to note that the occasion was free of violence due to the well-planned security measure that was observed in the entire run of the event,” Danao said in a statement.

PNP said there were around 600 VIPs at the inauguration site at the San Pedro Square.  At the San Pedro Church, over 20,000 people attended the mass offered before the younger Duterte took her oath of office.

It could be remembered that security was increased for the inauguration of Duterte, even if authorities had not received any direct threat to the Vice President-elect’s security.

The increase in security measures came after the two twin bombings in Mindanao — the first coming in nearby Koronadal, South Cotabato and Tacurong, Sultan Kudarat; and the second at Isabela City in Basilan.

However, PNP said last June 15 that it is suspending all permits to carry firearms except for those on-duty personnel for three days before and two days after the inauguration of both Duterte and President-elect Ferdinand “Bongbong” Marcos.

The number of personnel deployed to the inauguration sites of both candidates was also increased, from just 2,000 at Davao City to 3,700; and over 6,200 for Marcos’ oath-taking.

Marcos is expected to take his oath at the National Museum grounds along Padre Burgos Avenue in Manila on June 30.