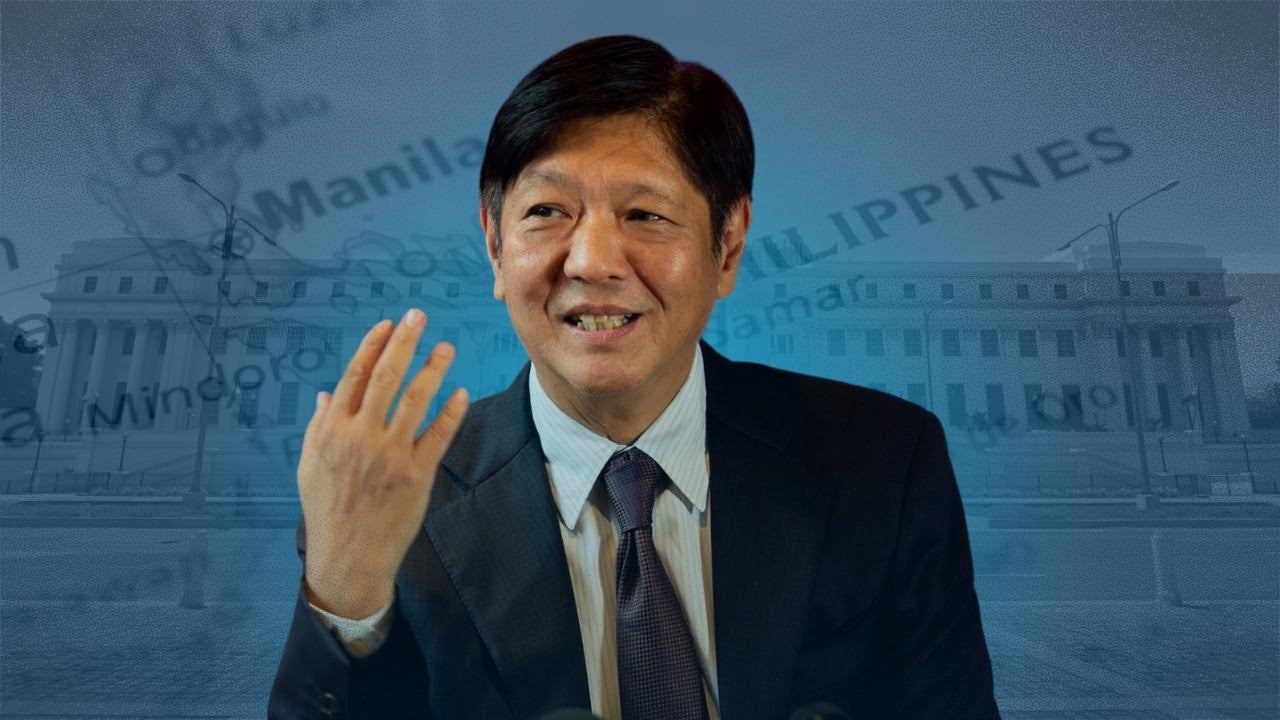 MANILA, Philippines—Following the inauguration of Vice President-elect Sara Duterte-Carpio last Sunday, the public eye is now on the oath-taking of President-elect Ferdinand “Bongbong” Marcos Jr. at the end of the month.

Sara, daughter of outgoing President Rodrigo Duterte, took her oath of office in her hometown Davao City, a few days before she would have been legally vice president—and over a week ahead of her running mate.

Marcos Jr. was announced to take his oath of office as the 17th chief executive of the country at the historic National Museum of the Philippines on June 30.

“The National Museum of Philippines building and its surrounding areas match our requirements for President-elect Marcos’ inauguration. Preparations are already in full swing to ensure that it will be ready by then,” said incoming Presidential Management Staff secretary Zenaida “Naida” Angping.

“The safety and welfare of our people are paramount. As such, we chose to avoid disrupting the medical care being given to the COVID-19 patients housed there. That’s why we opted for the National Museum as the venue.”

As Filipinos await Marcos Jr.’s oath of office, INQUIRER.net will detail some interesting facts about past inaugurations of previous Philippine presidents.

The National Museum of Fine Arts has had its fair share of stories about presidential inaugurations.

The venue, formerly known as the National Art Gallery, has hosted the inaugurations of three previous presidents of the country: Manuel L. Quezon in 1935, Jose P. Laurel in 1943, and Manuel Roxas in 1946. 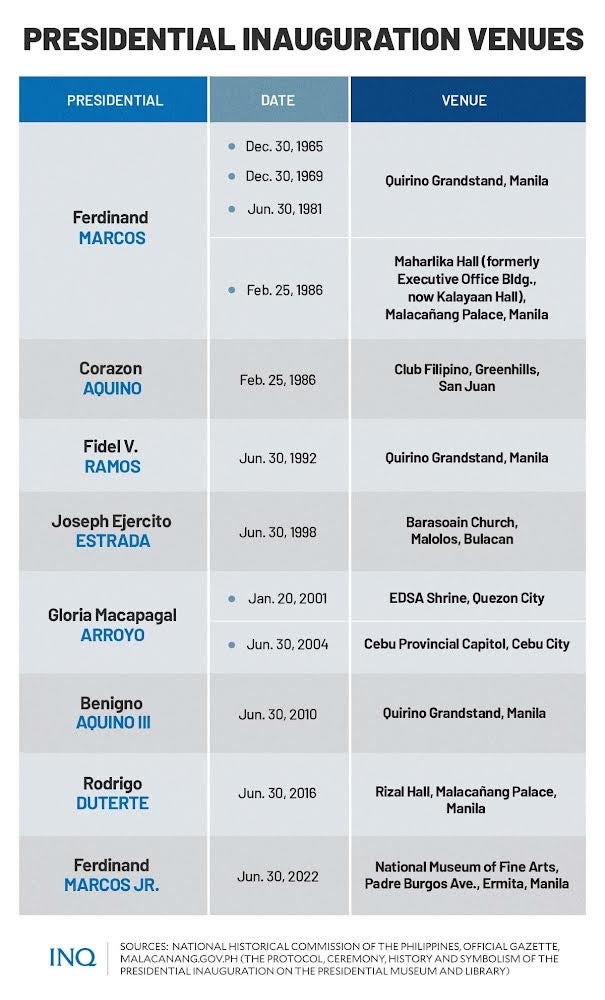 In June 2016, Duterte took his oath of office in Rizal Hall, the largest room in Malacañang Palace, where special state events are usually held.

Like the National Museum of Fine Arts, the Palace has also witnessed the oath-taking of four of the country’s former presidents.

In 1948, former President Elpidio Quirino took oath as the sixth president of the Philippines at the Council of State Room at Malacañang’s Executive Building under extraordinary circumstances, following the death of Roxas.

In 1957, in the same room where Quirino was inaugurated, Vice President Carlos P. Garcia took his oath of office as he assumed the presidency through succession following the sudden death of former President Ramon Magsaysay.

The third president inaugurated in the Palace was the late strongman Ferdinand Marcos in 1986, marking the commencement of his fourth and final term as president.

Six years ago, Duterte was the first to break the tradition of being inaugurated at Quirino Grandstand in Rizal Park. This monumental venue has witnessed and hosted 10 historic presidential inaugurations.

Roxas started the tradition when he retook his oath on July 4, 1946, as part of the Independence Day celebration. Back then, the venue was still called the Independence Grandstand, described in the Official Gazette as “a temporary structure built in front of the Rizal Monument.”

The venue takes its name from Quirino, the second to take his oath of office there in 1948. 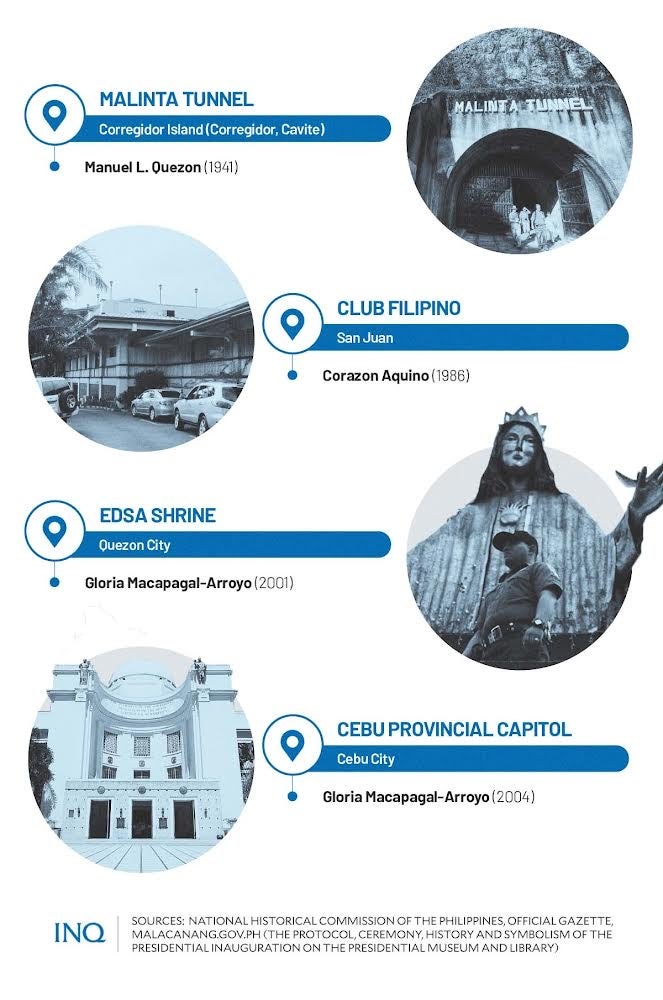 Six presidents have followed Roxas’ lead and have decided to keep the tradition. These were:

Meanwhile, former presidents Emilio Aguinaldo and Joseph Ejercito Estrada were inaugurated at the Barasoain Church in Malolos, Bulacan, in 1899 and 1998.

Two former presidents—Quezon (for his third inauguration) and Sergio Osmeña—took their oath of office in Washington, D.C. in the United States in 1943 and 1944, respectively, under special circumstances.

During those years, the Philippines was transitioning to independent rule from the Americans.

In 1941, Quezon was sworn into office for his second term as president at the Malinta Tunnel in Corregidor.

Another historic inauguration was held at the Club Filipino, Greenhills in San Juan, when former President Corazon Aquino took her oath of office at the height of the people power revolution against Marcos.

Years later, former President Gloria Macapagal-Arroyo was inaugurated at the EDSA Shrine in Quezon City after Estrada was forced out of office in 2001.

She was inaugurated for the second time in 2004 at the Cebu Provincial Capitol in Cebu City.

READ: IN PHOTOS: Inaugurations of past Philippine Presidents

After the oath, the newly sworn-in president will deliver his inaugural speech. In most inaugural addresses, presidents thank their supporters and the public who helped them secure the top position in the government.

Also included in the speeches are the presidents’ promises and plans, which they hope to accomplish by the end of their six-year term. Some appeal to the people and encourage them to work hand in hand to achieve progress. 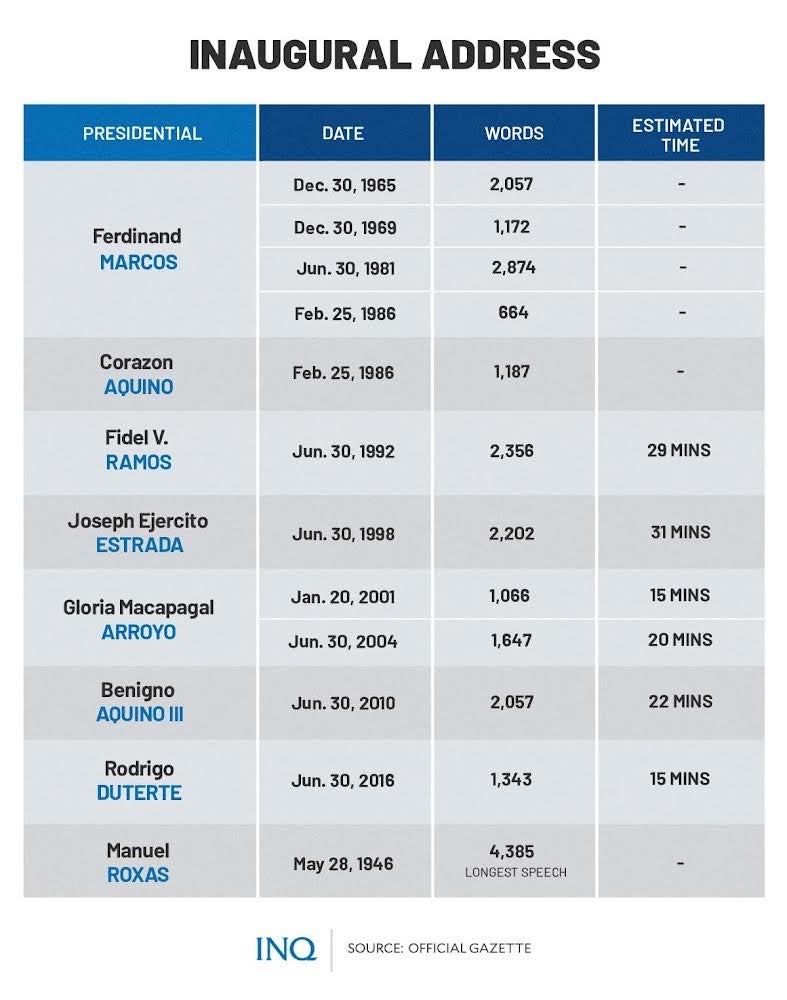 So far, based on transcripts published on the Official Gazette’s website, Roxas holds the record for the longest inaugural speech among the previous Philippine presidents. His inaugural address consisted of 4,385 words.

Data below show how long—in terms of duration and word count—the inaugural speeches of the previous presidents were:

Another symbolic and traditional part of the swearing-in ceremony of the country’s presidents is the Bible.

Although the Philippine Constitution does not require the Bible for the oath-taking ceremonies, as a country where most of the population is Catholic, many presidents in the past have opted to include it in their inaugural rites. 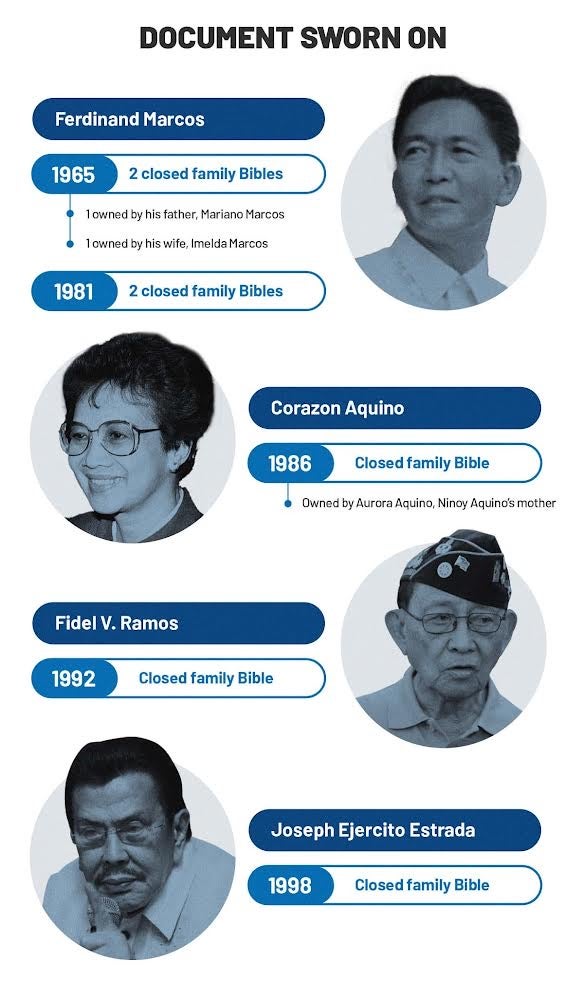 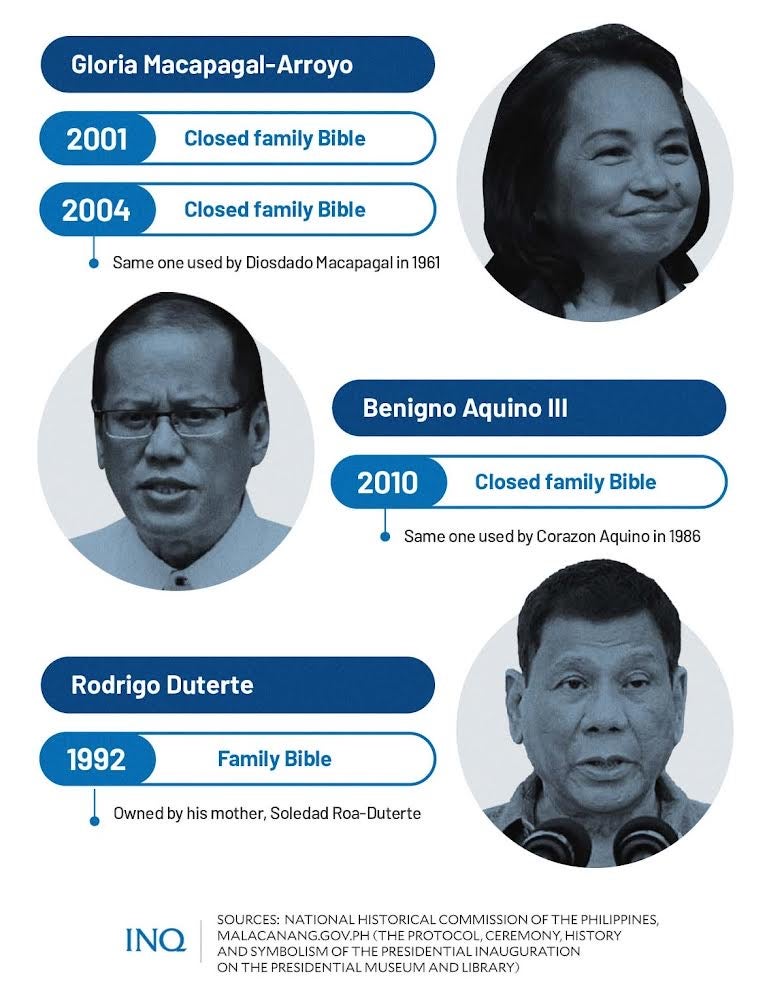 During the inauguration, the president traditionally lays the left hand on a Bible as they state their oath:

“I, [name] do solemnly swear [or affirm] that I will faithfully and conscientiously fulfill my duties as President [or Vice-President or Acting President] of the Philippines, preserve and defend its Constitution, execute its laws, do justice to every man, and consecrate myself to the service of the Nation. So help me God.”

In case of affirmation, Article 7 Section 5 of the 1987 Constitution stated that the last sentence would be omitted.

The tradition of including or using the Bible during swearing-in ceremonies started on December 30, 1953, when Magsaysay swore on a Bible during his inauguration at the Independence Grandstand—now Quirino Grandstand—in Manila.

The Bible used during the past presidential inaugurations also holds personal and historical significance.

In 1965, during Marcos’ first inauguration as president of the Philippines, he used two Bibles—one owned by his father, Mariano Marcos, and another given by his wife, Imelda.

During her inauguration, Aquino used a family Bible that was passed down to her by Aurora Aquino, mother of the slain Ninoy Aquino. The same Bible was used in 2010 when her son, the late President Benigno Aquino III, took his oath of office as the 15th president of the Philippines.

In 2004, Arroyo took her oath of office using the same Bible her father, Diosdado Macapagal, used when he was sworn in as president in 1961.

Another part of this specific inauguration tradition is the Bible holders.

When Ramos, the first non-Catholic president of the country-was sworn into office in 1992, First Lady Amelita Ramos held the Bible beside him.

Meanwhile, Mike Arroyo held the Bible for his wife during her oath-taking in Cebu City in 2004.

Other presidents, however, chose different personalities to hold the Bible for them during their oath-taking.

In 2010, after the younger Aquino delivered his inaugural address, representatives or members of the public were called to lead the recitation of the Panata sa Pagbabago—Pledge for Change—a pledge of the Filipino citizens to help the government in effecting change and good governance. 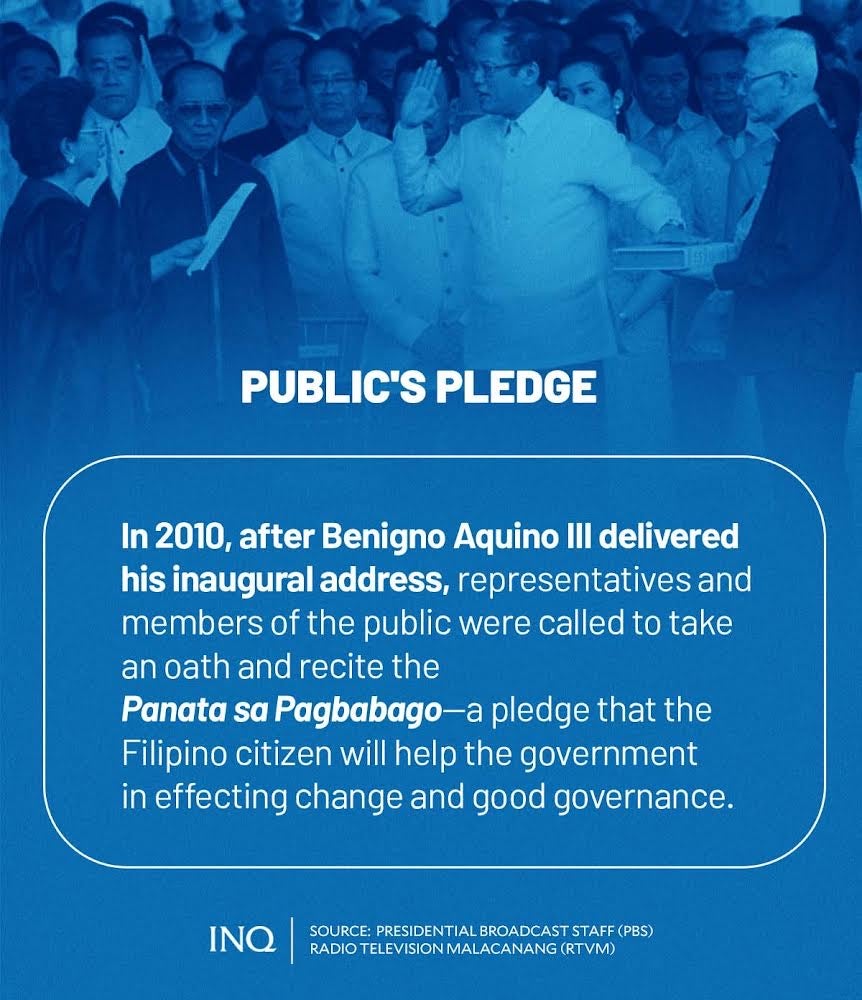 The pledge was as follows:

It was said to be a response to Aquino’s inaugural speech.

This was the first time for the public to pledge allegiance during a presidential inauguration in the country.

Food served during or after the inauguration rites has also been highlighted in the past.

In 2016, the Duterte administration decided to have a down-to-earth approach with the menu for the luncheon after the swearing-in.

The food served during the ceremony showcased rich Filipino cuisine while keeping with the chief executive’s order to hold a modest ceremony. 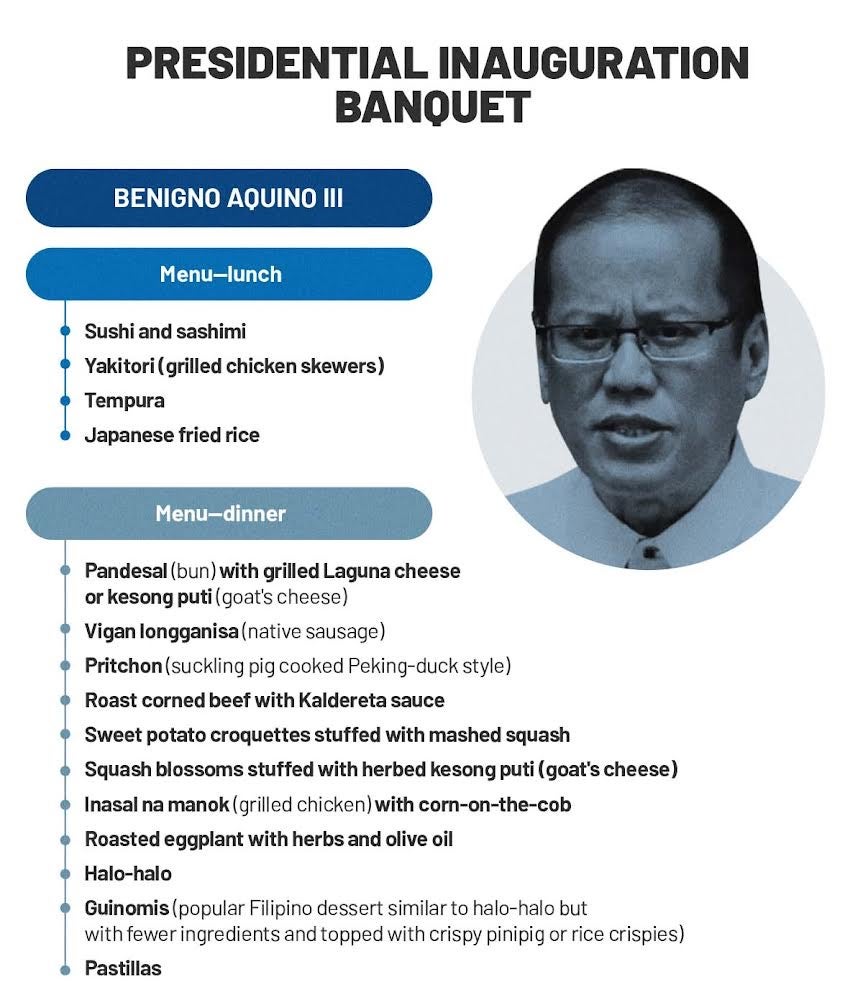 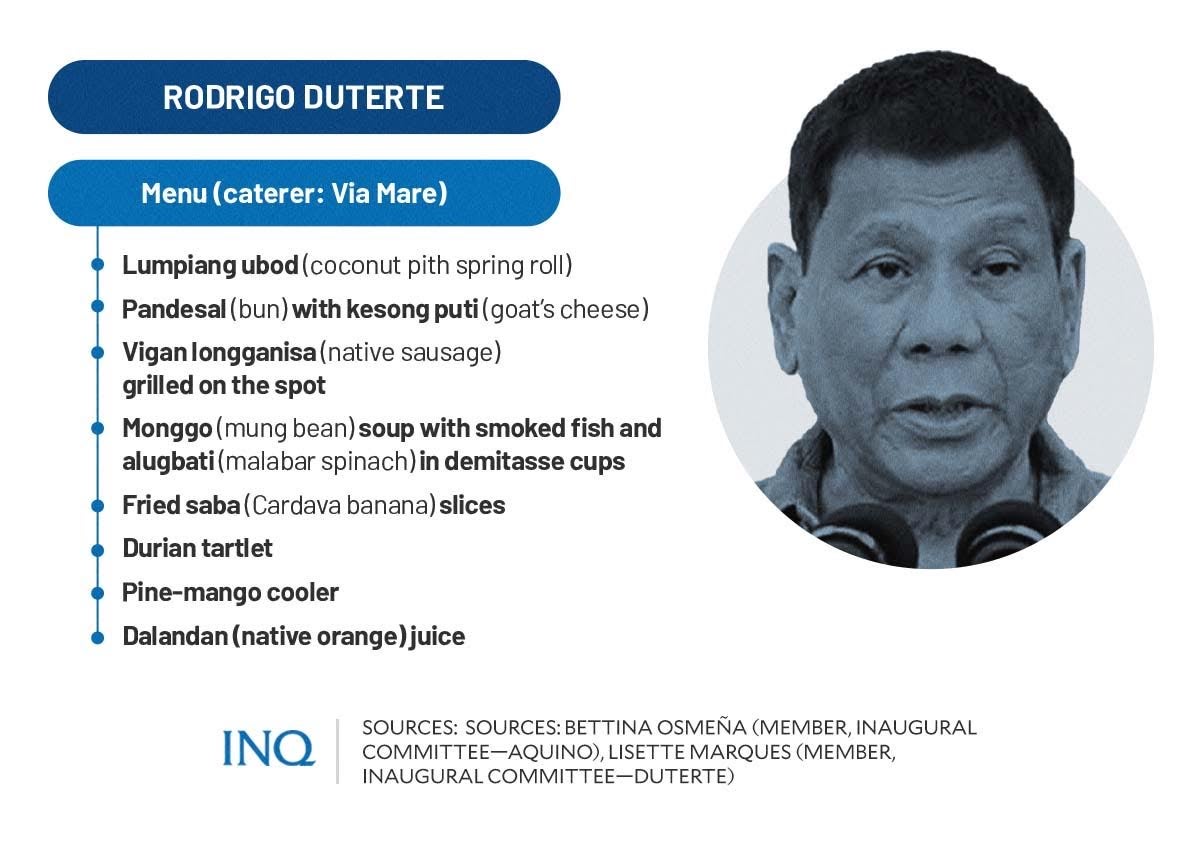 According to Lisette Marques, a member of the inaugural committee, only five types of food were served to over 600 individuals who were on the list of guests for Duterte’s inauguration:

Caterer Via Mare prepared the dishes on the menu while Glenda Baretto was tasked with rendering variations on classic Filipino Food.

Mongo soup was said to be one of Duterte’s favorite dishes, while durian is a Davao City specialty.

Meanwhile, in 2010, right after Aquino’s inauguration at the Quirino Grandstand, lunch was served to at least 250 guests who were at the Malacañang Palace.

According to reports, the menu consisted of Japanese food—which was said to be Aquino’s favorite cuisine.

Among the dishes served for lunch were:

For dinner, simple but delicious Filipino food was served to the guests, which include: