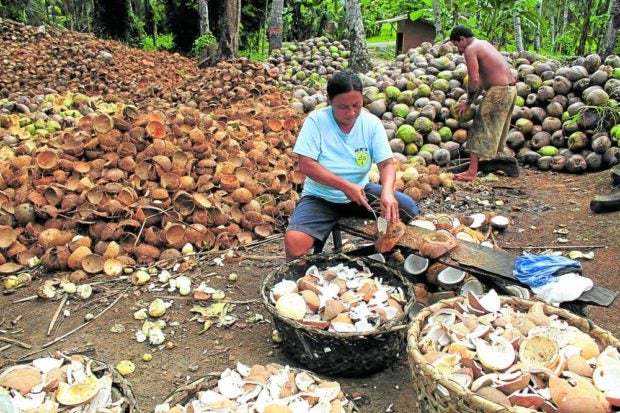 THE LONG WAIT | Coconut farmers in the village of Robocon in Linamon, Lanao del Norte province, in this photo taken in June 2019, eke out a living by manually drying their harvest into copra while waiting for the benefits due them from the coconut levy fund. (File photo by RICHEL V. UMEL / Philippine Daily Inquirer)

Danny Carranza, secretary general of national farmers’ group Kilusan Para sa Tunay na Repormang Agraryo at Katarungang Panlipunan, on Sunday said Marcos Jr. should acknowledge that the coco levy fund was “stolen” from coconut farmers during the strongman rule of his late father and namesake, Ferdinand Marcos, and that it should be returned to its “real owners.”

He also called on Marcos Jr. to fulfill his campaign promise of “unity” in favor of the marginalized sectors, particularly the small coconut farmers.

“[Marcos Jr.] must ensure that small coconut farmers benefit from the coco levy fund,” Carranza said in an interview on Monday.

Carranza said coconut farmers had been doubting the sincerity of Marcos Jr. as he had been harping on the good records of his late father’s administration during the campaign.

“If he doesn’t acknowledge that something wrong happened in the past, how can he rectify it? That’s the reason small coconut farmers are worried. Marcos Jr. must treat the coco levy fund as stolen,” Carranza said.

A total of P9.6 billion was collected from coconut farmers from 1971 until 1983 under the older Marcos’ rule. After Marcos Sr. was ousted from power in 1986, all coco levy-acquired assets were sequestered by the Presidential Commission on Good Government (PCGG).

Based on various lawsuits after the dictator fled, it was discovered that the collected levy fund was used to invest in, and buy businesses for, the benefit of Marcos and his cronies, notably the late business tycoon Eduardo Cojuangco Jr., then defense minister Juan Ponce Enrile, and the late Clara Lobregat, among others.

The coconut levy fund, now with the government, was estimated to be around P100 billion, at least P75 billion of which is in cash and the rest in assets, such as coconut mills. In 2012, the Supreme Court ruled that the fund belonged to the government for the benefit of coconut farmers.

Carranza said he found it ironic that Marcos Jr. would now be the one to implement the Coconut Farmers and Industry Trust Fund Act (Republic Act No. 11524) that was signed by President Duterte on Feb. 26, 2021.

“This is the paradox; that we’ve been saying. The coco levy fund was taken during the time of Marcos. Coconut farmers went after it after the Edsa [revolution], and were promised that they would get it back, but the issue now falls into the hands of the son,” Carranza said.

Under RA 11524, a Coconut Farmers and Industry Development Plan is to be crafted by the Philippine Coconut Authority (PCA).

Farmers’ groups demanded stronger participation in the utilization of the fund but the sector only secured three of the nine seats on the PCA board. The other six members were from various government agencies.

“We hope that it will never happen that the Marcos’ cronies will again benefit from the coco levy fund,” Carranza said.

Carranza said all projects that would be funded and implemented under RA 11524 should be transparent for the sake of the 3.5 million coconut farmers spread in approximately 3.6 million ha of agricultural land in the country, dominating the landscape in 68 out of 81 provinces.