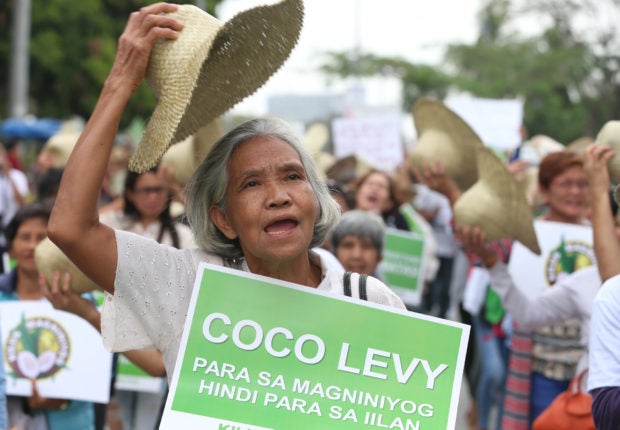 MARCH 12, 2018 Hundreds of Coconut farmers and supporters of KILUS Magniniyog march to the Senate to demand the immediate approval of Senate Bill (1233) or the Coconut Farmers and Industry Trust Fund Bill. INQUIRER PHOTO / EDWIN BACASMAS

TIAONG, Quezon — While throwing his support for Ferdinand “Bongbong” Marcos Jr., Quezon Gov. Danilo Suarez has found himself in a curious place of seeking an assurance from the presidential bet to have the coco levy funds returned to coconut farmers.

Suarez is referring to the monies collected from the coco levy, a tax imposed by Marcos’ father, the late President Ferdinand Marcos Sr., on the produce of coconut farmers, supposedly to develop the coconut industry.

Suarez said he has not asked Marcos Jr. regarding the matter.

According to the Presidential Commission on Good Government (PCGG), the coco levy fund originated in 1971 when then President Marcos and his close cronies imposed tax on coconut farmers through Republic Act No. 6260, which called for the creation of a Coconut Investment Fund and a Coconut Investment Company.

“But these coco levy funds were not used to benefit the farmers; instead (these funds were) diverted to purchase the United Coconut Planters Bank and San Miguel Corporation for the benefit of Marcos [Sr.] and his cronies,” the PCGG said in its website.

After the fall of the Marcos regime, the benefits promised to the farmers were not materialized and various suits were filed to give farmers the fund’s control.

In 2012, the Supreme Court declared that the coco levy fund belonged to the government for the benefit of the country’s coconut farmers. Up to now however, the implementation of the ruling on the coco levy has been tied up.

Without providing a concrete explanation and despite the pronouncements from the PCGG, Suarez believes there was no scam under the Marcos leadership in relation to the coco levy fund.

“Ang coco levy, the money was never stolen. It was there, kumita nag-interest lahat. Ang hindi lang talaga napa-implementa ay yung ruling ng Supreme Court during ng time ng dilawan that it should be reverted back to the coconut farmers,” Suarez said.

(Ang coco levy, the money was never stolen. It was there, it garnered interest. However, the Supreme Court ruling that it should be reverted back to the coconut farmers was not implemented by the ‘yellows’.)

Asked if he believes Marcos will commit to returning the coco levy fund to farmers when the controversy stemmed from the presidential candidate’s father’s presidency, Suarez said: “I don’t think Bongbong will be affected by cronyism.”

“I can see his sincerity. He wants to do something, maybe go back to the glory of his father,” Suarez said.

Read Next
Complaints lodged in Ombudsman vs NTF-Elcac spox
EDITORS' PICK
Geek out at TOYCON 2022 powered by Smart Signature
UK’s Boris Johnson will resign, BBC reports
High inflation: Your P1 is now worth only 87 centavos
High-risk pregnancy: Reducing your risk is in your hands
Unemployment rate up to 6% in May
House energy committee chair Arroyo bats for cheap electricity
MOST READ
Suspect in grisly killing of missing woman in Bulacan arrested
Kim Atienza’s daughter flaunts bikini body in response to critics of her ‘revealing photos’
AFP on Garcia conviction: We learned our lesson, instituted steps vs corruption
Cop slain in Isabela ambush
Don't miss out on the latest news and information.