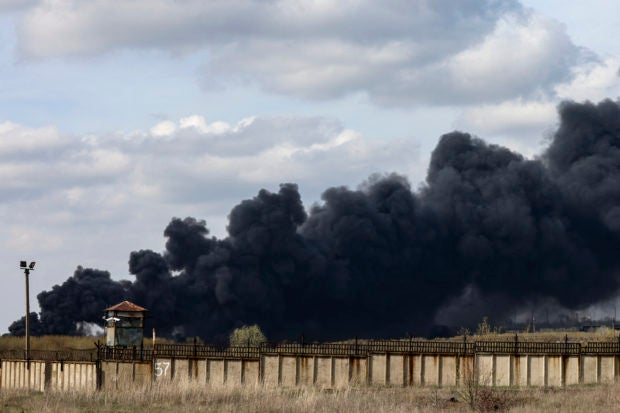 Smoke raises from an oil refinery in Lysychansk about 120km north of Donetsk, on April 16, 2022.  AFP

The ‘elimination’ of the last Ukrainian troops defending the eastern city of in Mariupol would end peace talks with Russia, Ukrainian President Volodymyr Zelensky warns.

Russia’s defence ministry says it has cleared the whole of the eastern city’s “urban area” of Ukrainian forces.

They say only remaining Ukrainian soldiers are in the Azovstal metalworks and that their only chance to live is to “lay down their arms and surrender”.

Russia steps up air strikes on military facilities in Kyiv, a day after warning it will renew its assault on the capital in response to what it says are Ukrainian attacks on Russian soil.

The world should prepare for the possible use by Russia of nuclear weapons, Ukraine’s President Volodymyr Zelensky tells journalists Saturday, repeating an earlier warning.

The Kremlin also steps up a crackdown on dissent at home, adding nine prominent Kremlin critics and journalists to its growing list of “foreign agents”

A Russian court orders the pre-trial jailing of a Siberian news editor for alleging that 11 riot police refused to join the military campaign in Ukraine.

Three sappers have been killed and four wounded while trying to clear mines near the eastern city of Kharkiv, Ukraine’s interior minister Denys Monastyrsky says.

Russia’s defence ministry claims to have shot down a Ukrainian transport plane carrying weapons supplied by western countries in the Odessa region.

Many have no homes to return to: UN

Many of the nearly five million people who have fled Ukraine will not have homes to return to, the United Nations warns.

UNHCR, the UN refugee agency, says 4,836,445 million Ukrainians have left the country since the Russian invasion on February 24: up 40,200 on Friday’s total.