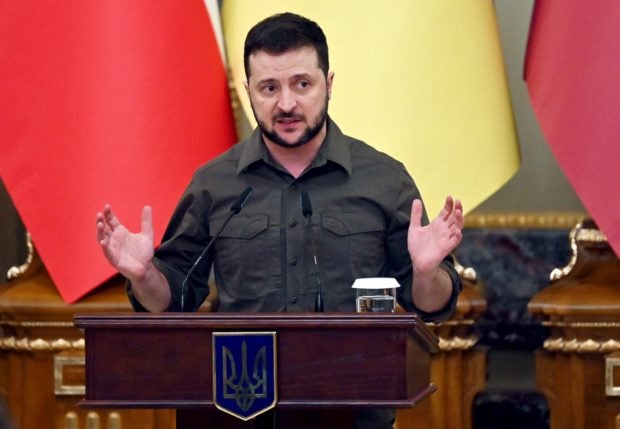 President of Ukraine Volodymyr Zelensky speaks during a press conference along with the presidents of Poland, Lithuania, and Estonia and Latvia, following their talks in Kyiv, on April 13, 2022.

“We shouldn’t wait for the moment when Russia decides to use nuclear weapons,” he said in an interview with Ukrainian news media.

“We must prepare for that.”

Anti-radiation medicine and air raid shelters would be needed, he said. The Russians, he said, “can use any weapon, I’m convinced of it”.

The interview was relayed by six Ukrainian news websites and also broadcast by the Ukrainian presidency on Telegram.

Already on Friday, Zelensky had warned that the world should be worried about the threat Putin posed, echoing comments by CIA director William Burns.

The Kremlin said it had placed Russian nuclear forces on high alert shortly after the assault began February 24, but the United States says it has not seen any sign of unusual nuclear movements.

Moscow has said it would use a nuclear weapon on Ukraine in the case of an “existential threat” against Russia, Kremlin spokesman Dmitry Peskov told CNN in a recent interview.

Russian military doctrine includes the “escalate to de-escalate” principle of launching a small nuclear weapon to regain the initiative in war.

Ukraine says over 870,000 who fled war have returned