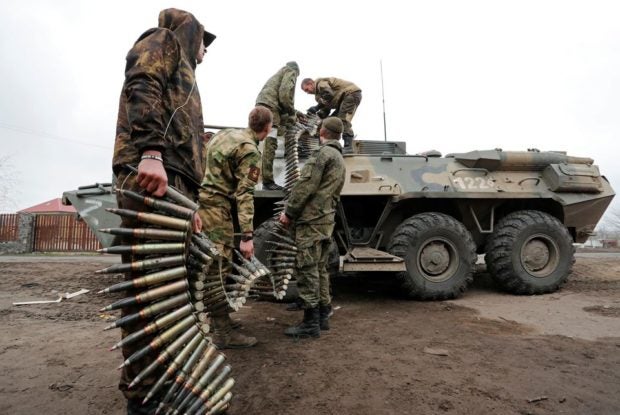 Russia’s defense ministry said on Wednesday that 1,026 soldiers of Ukraine’s 36th Marine Brigade, including 162 officers, had surrendered in the besieged Ukrainian port city of Mariupol.

Mariupol, which has been encircled by Russian troops for weeks, has seen the fiercest fighting and the most comprehensive destruction since Russia invaded on Feb. 24.

Russian television on Wednesday broadcast clips of what it said was the surrender. In the footage, unarmed men in military fatigues were visible walking with their hands up along a grass- and tree-lined path towards masked soldiers cradling assault rifles.

In one clip, four marines walked away from a damaged industrial building carrying a wounded person on a stretcher. One of the four carried a makeshift white flag as well. Wounded men were loaded onto a yellow bus.

An unidentified Russian soldier said: “You may be scared or not, but it is necessary to surrender anyway. The choice is not a big one. First, the encircling is tight enough. Second, there are at least five echelons (of troops), so it is not that simple to exit if someone would think that he can easily leave.”

More than a dozen solders were lined up in formation in a dark room, where an unidentified prisoner of war said in Russian: “I was in a group of 13 to 15 men who moved together and survived. We had to surrender as we had been encircled.”

The main Sea of Azov port is the biggest target in the eastern Donbas region that Moscow now calls the focus of its campaign. If captured, it would be the first major city to fall since the war began. Its capture would help secure a land passage between separatist-held eastern areas and Crimea, which Russia seized and annexed in 2014.

Reuters could not independently confirm the surrender. Ukrainian defence ministry spokesperson Oleksandr Motuzyanyk said he had no information about it, and there was no immediate comment from the Ukrainian president’s office or the Ukrainian general staff.

“In the town of Mariupol, near the Ilyich Iron and Steel Works, as a result of successful offensives by Russian armed forces and Donetsk People’s Republic militia units, 1,026 Ukrainian soldiers of the 36th Marine Brigade voluntarily laid down arms and surrendered,” the Russian defense ministry said in a statement.

On Monday, a post on the Ukrainian marine brigade’s Facebook page had said the unit was preparing for a final battle in Mariupol that would end in death or capture as its troops had run out of ammunition.

“Today will probably be the ultimate battle, as there is no ammo left,” said the post. “Beyond that: hand to hand fighting. Beyond that, for some death, for others capture.”

Some Ukrainian officials said at the time that the post may have been fake, and that troops were still holding out.

The Russian defense ministry said 151 wounded Ukrainian soldiers were treated on the spot and taken to Mariupol’s city hospital.