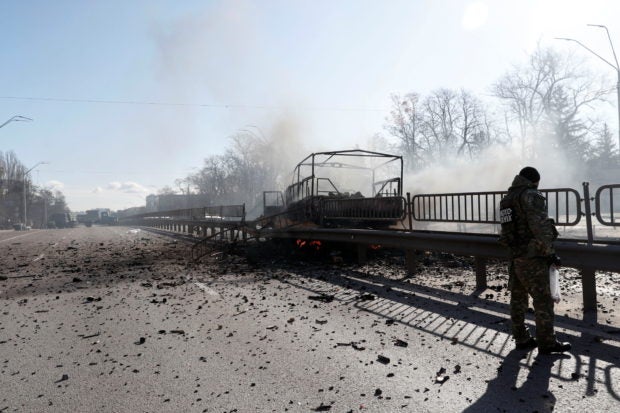 A damaged vehicle is seen at the site of a fighting with Russian raiding troops after Russia launched a massive military operation against Ukraine, in Kyiv, Ukraine February 26, 2022. REUTERS

MOSCOW — Russia said Wednesday that 498 Russian troops had been killed in Ukraine, its first announced death toll since President Vladimir Putin launched an invasion of the country last week.

“Four hundred and ninety-eight Russian servicemen have died in the line of duty,” defense ministry spokesman Igor Konashenkov said in a statement broadcast on state television, adding that “1,597 of our comrades have been wounded.”

Moscow had previously admitted to losses but without giving any numbers.

Konashenkov said that he wanted to “once again underline that neither conscripts nor cadets of educational institutions of the Russian defence ministry are participating in the special operation”.

Russian independent organisations that help parents find their sons have told AFP that conscripts were taking part in the conflict, having been made to sign documents before crossing the border.

Russia has said that its army is working to “de-Nazify” Ukraine.

Putin gave the order for Russian troops, who for weeks had been massing on Ukraine’s borders, to attack last Thursday.

Ukraine has said that more than 350 civilians had been killed since the invasion.