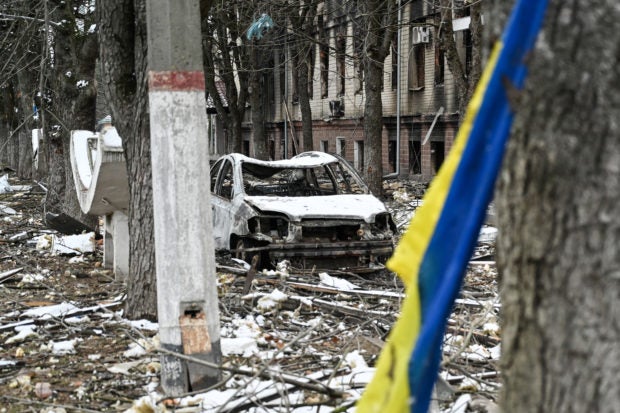 The view of military facility which was destroyed by recent shelling in the city of Brovary outside Kyiv on March 1, 2022. AFP

PARIS — On the seventh day of fighting in Ukraine Wednesday, Russia claims control of the southern port city of Kherson, street battles rage in Ukraine’s second-biggest city Kharkiv, and Kyiv braces for a feared Russian assault.

Here is a summary of the situation on the ground, based on statements from the sides, Western defence and intelligence sources and international organisations.

– Russia says it has taken “full control” of Kherson, a port city on the Black Sea.

– There is fighting in the streets of Kharkiv, Ukraine’s army says.

– Russia steps up bombing of Ukraine’s cities, including west and south of Kyiv.

– With Western observers noticing a Russian military column outside Kyiv, the capital remains braced for a possible assault.

– Mariupol on the Azov Sea is reportedly surrounded by Russian forces

– Spain is the latest country to announce supply of “military hardware” to Ukraine.

– Ukraine claims 5,840 Russian soldiers have lost their lives in the conflict so far, a claim which cannot be verified.

– Russia says 498 of its soldiers have died in Ukraine. This toll, the first given by Moscow since the invasion began, cannot be verified.

– According to the Russian defence ministry, its forces have destroyed over 1,500 Ukrainian military elements including 58 planes, 46 drones and 472 tanks.

– More than 350 civilians have died in the conflict so far, including 14 children, Ukraine says.