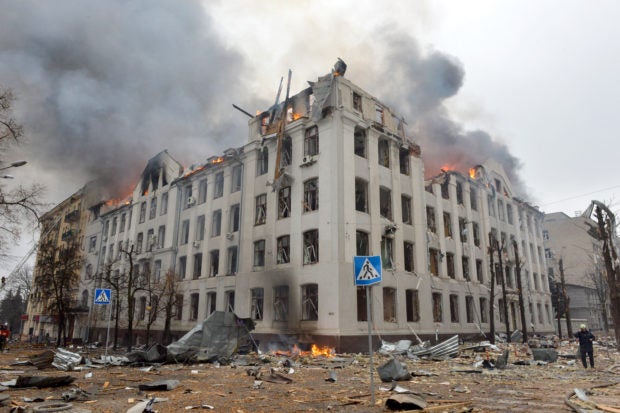 Firefighters work to contain a fire at the Economy Department building of Karazin Kharkiv National University, allegedly hit during recent shelling by Russia, on March 2, 2022. AFP

WASHINGTON — Russia’s war against Ukraine is a week old, but its consequences are already reverberating across the globe: it has upended international relations, left Moscow isolated, united a previously divided West, and raised the specter of a nuclear standoff.

Moscow’s offensive marks a turning point for the whole world.

Above all, Russia’s attack shattered “the hope that post-Cold War Europe would be spared a large-scale land war,” said Ali Wyne, Senior Analyst with Eurasia Group.

Europe, the United States and United Nations Secretary-General Antonio Guterres came together to denounce Russia’s attack on its neighbor as a flagrant violation of the international rules-based order built after World War II.

Punishment was quick and painful.

From crippling Russia’s financial system, to slapping penalties on its oligarchs and President Vladimir Putin himself, to banning Russia from European airspace and major sports competitions, the West has unleashed an unprecedented cascade of sanctions on Moscow.

“Going forward, Russia will be a pariah, and it’s hard to see how they can restore anything resembling normal interactions in the international system,” said Sarah Kreps, professor at Cornell University.

In 2019, French President Emmanuel Macron declared that Nato was experiencing “brain death,” riven by disagreements between members and belittled by Donald Trump.

When Joe Biden was elected, he sought to breathe new life into the alliance, hoping to rely on Nato in his standoff with China. That prompted more internal divisions, with some members saying that confronting Beijing was not part of Nato’s mission.

Born at the start of the Cold War with the aim of protecting Europe from the Soviet threat under the US nuclear umbrella, the transatlantic military alliance is now rediscovering its purpose — and its key enemy — by stepping up against Moscow.

French diplomat and economist Jean Monnet, who played a significant role in rebuilding Europe after World War II, famously said that Europe will be born out of crises as well as out of its solutions to those crises.

Heeding a longstanding call by Paris to beef up Europe’s military might, the European Union’s 27 members approved a total of half a billion euros in defense aid to Ukraine.

In a dramatic move, Berlin broke with its long-standing doctrine when it announced that it would send lethal aid to Ukraine.

And German Chancellor Olaf Scholz declared that his country, often criticized by the US as an understudy in Nato for its small defense budget, would significantly boost military spending to modernize its army.

“Neutrality is not indifference.”

This is what Swiss President Ignazio Cassis said when he announced that his country would back all of the EU sanctions against Russia, in a major break with its longstanding tradition of neutrality and its reputation as an international banking center.

And Finland and Sweden, traditionally non-aligned with NATO, are moving closer in its direction.

Japan, South Korea and Singapore condemned Russia’s invasion, although India and the United Arab Emirates have not.

But Russia has its own allies.

It remains to be seen to what extent China will help Russia offset the effect of Western sanctions.

And China remains cautious. It chose to abstain, rather than veto a UN Security Council resolution “deploring” Russian aggression in Ukraine while expressing “deep regret” to Kyiv over the war.

“The more protracted and bloody the conflict becomes, the more challenging it will grow for China to balance its support for core Russian positions (such as opposing Nato expansion) and its desire to avoid incurring further transatlantic opprobrium.”

“Russian leaders have now repeatedly made not-so-veiled references to their nuclear arsenal in the hopes of deterring the West from bolstering Ukrainian defenses,” said Kreps from Cornell University.

“The problem is that its approach to doing so has eroded the nuclear taboo that’s been in place for decades.”

Why India is right not to take sides on Ukraine