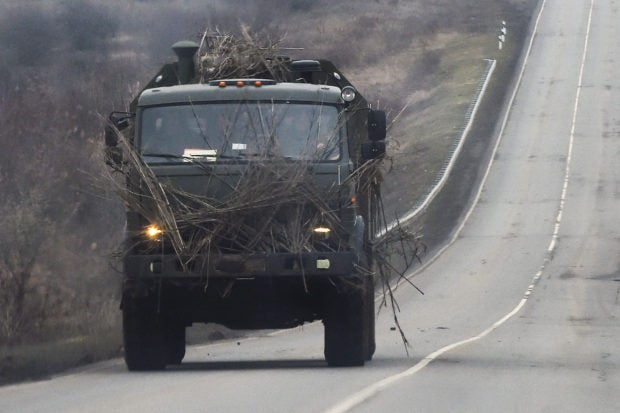 A Russian military truck moves along a road in Russia’s southern Rostov region, which borders the self-proclaimed Donetsk People’s Republic, on February 23, 2022. AFP

YANGON — The Russian invasion of Ukraine is “justified” and demonstrates Moscow’s position as a world power, Myanmar’s junta said on Friday, backing its major ally and arms supplier.

The dawn invasion of troops and tanks accompanied by airstrikes on Ukrainian cities has sparked outrage across the world, with the United States and its allies responding with a barrage of sanctions.

But junta spokesman Zaw Min Tun said Moscow’s military had “carried out what is justified for the sustainability of their country’s sovereignty”.

“Russia shows its position to the world as a world power,” he added in the statement, which was also released in Russian.

Moscow is a major ally and arms supplier to Myanmar’s generals and has repeatedly shielded the isolated country at the United Nations.

He later told Moscow’s Defense Minister Sergei Shoigu that Myanmar’s army had “become one of the strongest in the region” thanks to his country’s help, according to Russian news agency TASS.

More than 1,500 civilians have been killed since the junta took power in a coup last year, according to a local monitoring group, as it wages a bloody crackdown on dissent.

Earlier this week a UN expert on Myanmar said Russia — along with other major ally China — was continuing to supply the military with weapons, including fighter jets and armoured vehicles.