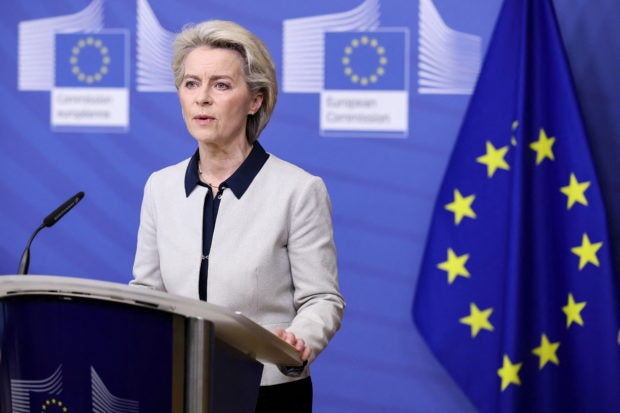 European Commission President Ursula von der Leyen speaks during a statement on Russia’s attack on Ukraine, in Brussels, Belgium February 24, 2022 ahead of an EU special summit called today to “discuss the crisis and further restrictive measures” that “will impose massive and severe consequences on Russia for its actions”. Kenzo Tribouillard/Pool via REUTERS

BRUSSELS — European Commission chief Ursula von der Leyen on Saturday said that Brussels would propose to freeze the assets of the Russian central bank, in a major escalation of sanctions against Moscow following the invasion of Ukraine.

She was speaking after a videoconference with the leaders of the United States, Germany, France, Italy and Canada intended to coordinate the West’s response to the invasion.

The allies also agreed to further restrictions on Russian oligarchs, including measures “to limit the sale of citizenship — so-called golden passports — that let wealthy Russians connected to the Russian government become citizens of our countries”.

Von der Leyen said she would make the proposals to EU leaders, who could request amendments to minimise the effect of the measures on their economies.

The new wave of sanctions was an extraordinary leap forward in just a few days that was made possible by a sudden reversal by Germany on its opposition to restricting Russia from SWIFT.

SWIFT’s messaging system allows banks to communicate rapidly and securely about transactions, and cutting Russia off would cripple its trade with most of the world.

Italy, Hungary and Cyprus were also opposed to the SWIFT ban, but have come around to the idea in the face of international outrage against Russia’s invasion of its neighbour.

In an apparent concession to Berlin, the powers agreed that the ban would only apply to selected banks in order to avoid the measure backfiring too harshly on European businesses.

In probably the most unexpected new measure against Putin, the powers agreed to limit the Russian central bank’s ability to access its vast foreign reserves.

These are estimated to be over $600 billion and are the vast windfall of Russia’s immense energy wealth.

“This will freeze its transactions. And it will make it impossible for the Central Bank to liquidate its assets,” Von der Leyen said.