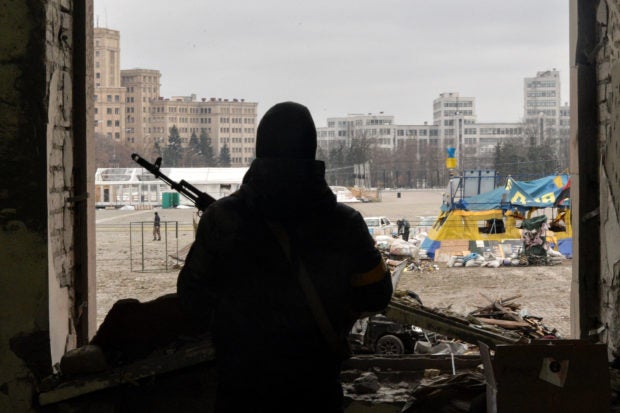 A view of the square outside the damaged local city hall of Kharkiv on March 1, 2022, destroyed as a result of Russian troop shelling. AFP

KHARVIV — Russian airborne troops landed in the eastern Ukrainian city of Kharkiv on Wednesday, the Ukrainian army said, adding that there were immediate clashes.

“Russian airborne troops landed in Kharkiv… and attacked a local hospital,” the army said in a statement on messaging app Telegram. “There is an ongoing fight between the invaders and the Ukrainians.”

Kharkiv, a largely Russian-speaking city near the Russian border, has a population of around 1.4 million.

It has been a target for Russian forces since President Vladimir Putin launched an invasion of Ukraine last Thursday and which intensified on Tuesday.

According to Anton Gerashchenko, adviser to the Ukrainian Interior Minister, a fire broke out on Wednesday in the barracks of a flight school in the city following an airstrike.

“Practically there are no areas left in Kharkiv where an artillery shell has not yet hit,” he was quoted as saying in a statement on Telegram.

In Kherson on the Black Sea, where officials had on Tuesday reported Russian checkpoints encircling the city, Russian forces took control of the railway station and the port overnight, city mayor Igor Kolykhayev was quoted by local media.

In Mariupol, a port on the Sea of Azov, more than a hundred people were injured on Tuesday in Russian fire, the mayor of the city, Vadym Boychenko was quoted as saying by Ukrainian media.

In Borodyanka, 50 kilometres from Kyiv, Russian airstrikes destroyed two residential buildings on Tuesday, according to Ukraine’s deputy minister of foreign affairs Emine Dzhaparova, who shared a video of the grey buildings partially in ruins, with apartments in flames.

The Ukrainian Ministry of Defence also said overnight that it feared an attack from Belarus.

“Belarusian troops have been put on high alert and are concentrated in areas closest to the border with Ukraine,” the ministry said in a statement on Facebook.

During the day on Tuesday, Ukrainian intelligence noted “significant activity” of aircraft in the border area, and convoys of vehicles carrying food and ammunition were observed there, the statement said.

In view of these movements, Belarus “could probably support the Russian invaders in the Russian-Ukrainian war in the future”, warned the ministry.

“Missile attacks against military and civilian targets” in Ukraine have been “systematically” launched from Belarusian territory since the start of the Russian invasion on February 24, the ministry added.