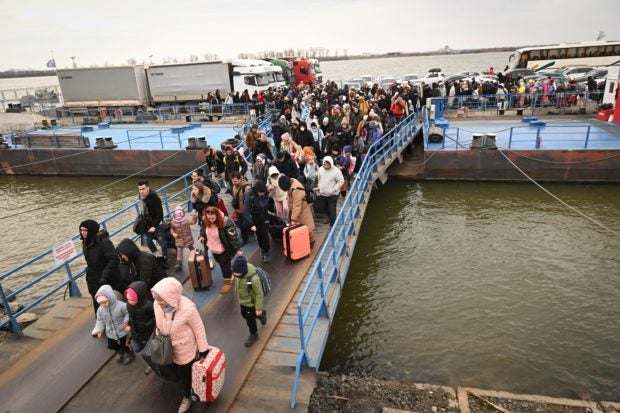 People coming from Ukraine descend from a ferry boat to enter Romania after crossing the Danube river at the Isaccea-Orlivka border crossing between Romania and Ukraine on February 26, 2022, as Ukrainians flee their country following Russia’s invasion of Ukraine. (Photo by Daniel MIHAILESCU / AFP)

MANILA, Philippines — The Philippines should open its doors to fleeing Ukrainians as their country puts up a firm resistance to Russia’s invasion, Sorsogon Gov. Francis “Chiz” Escudero said Monday.

“As we bring Filipinos home, we can also open our doors to Ukrainians who need refuge, as former president Manuel Quezon did for the Jews during the Holocaust,” Escudero said in a statement.

The former senator was referring to when Quezon opened the country in 1940 to accommodate up to 10,000 fleeing Jewish refugees at the time when no other country would take them during the reign of German dictator Adolf Hitler, who rounded up and murdered Jews on concentration camps.

According to Escudero, the Philippines must also not remain neutral and align itself with other peace-loving nations making a stance against war and aggression.

“As one of the world’s most dynamic democracies, which has constantly fought to regain its freedoms, the Philippines should help promote peace and the right to self-determination of every country in every part of the world,” he added.

The Philippines, however, is set to vote in favor of a United Nations resolution expressing “explicit condemnation” of Russia’s invasion of Ukraine at the United Nations General Assembly (UNGA) at 11 p.m. on Monday (Manila time).

Escudero, who is seeking a return to the Senate in the May 9 elections, then appealed to Filipinos in Ukraine to coordinate with the Department of Foreign Affairs (DFA) to ensure their safety.

“I understand that some want to wait for it because they have good jobs and good lives there, but the situation could quickly get serious and we may lose access to you anytime. Just think of your families here,” he said.

In the latest update by DFA, 39 Filipinos from Ukraine are waiting for their safe return to the Philippines as of Monday night. Some of them are currently evacuated in countries near Ukraine while others are still at the Ukrainian border.

Russia launched its attack on Ukraine on February 24 despite several weeks of intense diplomatic negotiations and a few sanctions from the West to alleviate the tension.

Russia’s leader Vladimir Putin appeared undeterred and had amassed between 150,000 and 200,000 troops along Ukraine’s borders before unleashing a full-scale invasion that has killed scores of people and has forced more than 50,000 to flee Ukraine in just 48 hours and sparked fears of a wider conflict in Europe.

On Sunday, Putin also placed Russia’s nuclear deterrent on high alert in the face of a barrage of Western economic sanctions for his war on Ukraine.