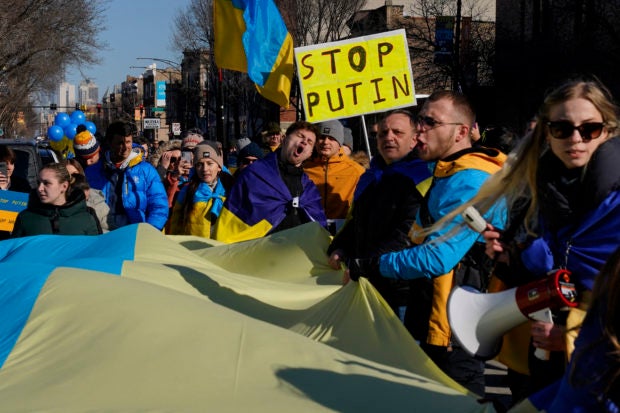 Demonstrators gather for a protest against the Russian invasion of Ukraine in front of Saints Volodymyr and Olha Ukrainian Church in Chicago, Illinois, on February 27, 2022.  Dressed in the blue and yellow of Ukraine’s flag hundreds of thousands of people took to the streets worldwide Sunday denouncing Russia’s invasion of its neighbor. From Berlin to Baghdad, from Washington to Saint Petersburg, demonstrators chanted “shame” against Russian President Vladimir Putin while others waved banners with slogans like “Putin murderer” or “stop the monster.” (AFP)

US officials said Putin’s stunning announcement, four days after his powerful military launched an assault on Ukraine, was dangerously escalatory and part of a pattern of fabricating excuses to justify aggression.

Putin said he took the action in response to “aggressive” and “unfriendly” actions by NATO and Western countries, as the Ukraine crisis deepened.

“This is a pattern that we’ve seen from President Putin through the course of this conflict, which is manufacturing threats that don’t exist in order to justify further aggression,” White House press secretary Jen Psaki said on ABC.

A senior US defense official, speaking on grounds of anonymity, said Putin’s step came as Ukraine’s forces, helped by arms from the West, continued to stymie the advance of Russian troops, who this official said had run into fuel supply and other logistical problems.

“We believe that this is not only an unnecessary step for him to take, but an escalatory one,” the official said of Putin’s nuclear announcement.

“Unnecessary because Russia has never been under threat by the West, by NATO and certainly wasn’t under any threat by Ukraine,” the official said.

“And escalatory because it is clearly potentially putting in play forces that, if there’s a miscalculation, could make things much, much more dangerous.”

The US defense official declined to say whether US nuclear forces, the world’s second largest, had been placed on higher alert.

“I would just tell you that we remain confident in our ability to defend ourselves and our allies and our partners. And that includes in the strategic deterrence realm.”

The US official said Russia has now deployed into Ukraine about two-thirds of the 150,000-strong combat force it had positioned on the country’s borders.

But, according to information the Pentagon has, the Russian force has not attained the goals it had set for itself ahead of crossing Ukraine’s frontier.

The apparent Russian plan to quickly seize the two largest cities, Kyiv and Kharkiv, has faltered because of “creative” resistance from Ukrainian troops and the Russians’ own fuel and logistical support issues, the Pentagon believes.

“This is most particularly acute in their advance on Kharkiv,” the official said.

And aside from some apparent exploratory units entering Kyiv, where they engaged in firefights, the main Russian force remains halted around 30 kilometers (18 miles) north of the capital.

“They have not achieved what we believe they intended to achieve by day four. So in many cases, they’re behind schedule,” the defense official said.

Nevertheless, the official said the Russian military will adapt and still has one-third of its invasion force on the border waiting.

“That’s a lot of combat power,” the official said.

The official said Russian forces appear to be positioning to launch a siege on cities it has not quickly captured, specifically Chernihiv northeast of Kyiv, putting large populations of civilians at risk.

For a siege to be successful, the official said, “You basically by design are going to be targeting civilian infrastructure and causing civilian harm.”

“That’s worrying and that’s concerning,” the official said, labelling it “the beginnings of a bad sort of tactical approach by the Russians.”