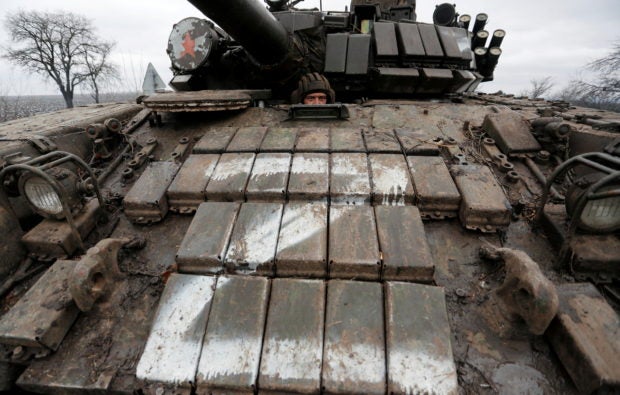 A serviceman of pro-Russian militia is seen inside a tank of armed forces of the separatist self-proclaimed Luhansk People’s Republic (LNR) on a road in the Luhansk region, Ukraine February 27, 2022. REUTERS/Alexander Ermochenko

WASHINGTON — Russia, frustrated by early battlefield setbacks in Ukraine, could be shifting its strategy to siege warfare just as President Vladimir Putin raises the risk of a catastrophic miscalculation by putting nuclear forces on heightened alert, a senior U.S. defense official said on Sunday.

Putin gave the order to his nuclear forces as Washington assesses that Russian troops have made limited progress in their four-day-old invasion due to stiff Ukrainian resistance and planning failures that have left some units without fuel or other supplies, U.S. officials said.

As missiles rained down on Ukrainian cities, hundreds of thousands of civilians, mainly women and children, were fleeing the Russian assault into neighboring countries.

The United States assesses that Russia has fired more than 350 missiles at Ukrainian targets so far, some hitting civilian infrastructure, the senior U.S. defense official said, speaking on condition of anonymity. Still, it had so far mainly focused on military targets.

Citing a Russian offensive on the Ukrainian city of Chernihiv, north of Kyiv, the official cited early indications that Russia might be adopting siege tactics.

“It appears that they are adopting a siege mentality, which any student of military tactics and strategy will tell you, when you adopt siege tactics, it increases the likelihood of collateral damage,” the official said.

So far, the Russian offensive cannot claim any major victories. Russian has not taken any Ukrainian city, does not control Ukraine’s airspace, and its troops remained roughly 30 km (19 miles) from Kyiv’s city center for a second day, the official said.

The senior U.S. defense official said it remained to be seen what Russian forces would do next, but the early signs were worrying.

“The indications are enough in terms of how they’re positioning their forces around the city (of Chernihiv), how they’re beginning this barrage using rockets, that gives us concern,” the official said.

“In order for a siege … to be successful, you basically, by design, are going to be targeting civilian infrastructure and causing civilian harm.”

Images on social media showed some Russian military vehicles in Ukraine, including battle tanks, that had apparently been abandoned after running out of fuel, raising questions about logistical failures.

“They simply don’t have a lot of experience moving on another nation state at this level of complexity and size,” the official said.

The official said it was unclear whether it was a failure in planning or execution, but added that Russian forces were likely to adapt and overcome the challenges.

Russia has still not moved into Ukraine about a third of the troops that Putin had arrayed around its borders, the official said. But it has rapidly increased the number of forces Moscow has sent into Ukraine in recent days.

The Pentagon learned of the heightened Russian alert for its nuclear forces from Putin’s televised announcement, the senior U.S. defense official said, instead of from American intelligence sources.

Just after Putin spoke, Defense Secretary Lloyd Austin, General Mark Milley, chairman of the Joint Chiefs of Staff, and the top U.S. commander for Europe, General Tod Wolters, held a pre-scheduled meeting at 8:30 a.m. (1330 GMT) at which they discussed the Russian president’s decision.

Although Washington was still gathering information, Putin’s move was troubling, the official said.

“It’s clearly, essentially, putting in play forces that, if there’s a miscalculation, could make things much, much more dangerous,” the official said.

Asked whether the United States would continue to provide military assistance to Ukraine following Putin’s announcement, the official said: “That support is going to go forward.”

Mick Mulroy, a former senior Pentagon official and retired CIA paramilitary officer, said he believed Putin’s decision to elevate the alert of his nuclear forces was a reaction to battlefield losses.

“Russia placing its nuclear forces on alert is incredibly reckless and a clear indication that Putin realizes his military is not performing as expected in Ukraine,” Murloy said.