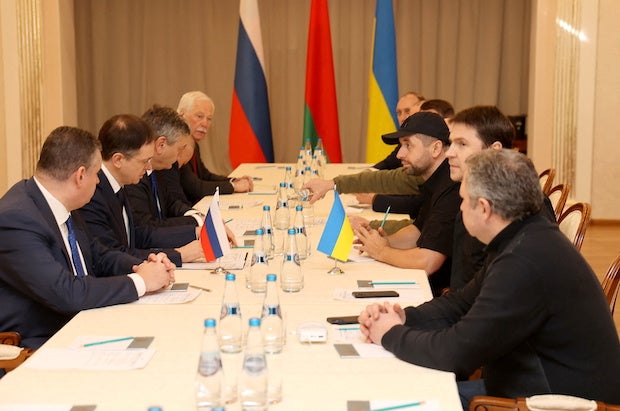 Russian and Ukrainian officials take part in the talks in the Gomel region, Belarus Feb. 28, 2022. (Photo by Sergei Kholodilin/BelTA/Handout via REUTERS)

KYIV/MOSCOW — Talks between Russian and Ukrainian officials began on the Belarusian border on Monday, as Russia faced deepening economic isolation four days after invading Ukraine in the biggest assault on a European state since World War II.

Russian forces seized two small cities in southeastern Ukraine and the area around a nuclear power plant, the Interfax news agency said on Monday but ran into stiff resistance elsewhere.

Talks began with the aim of an immediate ceasefire and the withdrawal of Russian forces, the Ukrainian president’s office said, after a Russian advance that has gone more slowly than some expected.

Russia has been cagier about the talks, with the Kremlin declining to comment on Moscow’s aim.

It was not clear whether any progress could be achieved after President Vladimir Putin on Thursday launched the assault and put Russia’s nuclear deterrent on high alert on Sunday.

The talks are being held on the border with strong Russian ally Belarus, where a referendum on Sunday approved a new constitution ditching the country’s non-nuclear status at a time when the former Soviet republic has become a launchpad for Russian troops invading Ukraine.

“Dear friends, the President of Belarus has asked me to welcome you & facilitate your work as much as possible. As it was agreed with the Presidents (Volodymyr) Zelenskiy and Putin, you can feel completely secure,” Belarusian Foreign Minister Vladimir Makei said at the start, according to the foreign ministry’s translation on Twitter.

Russian businessman Roman Abramovich, who owns English football Premier League club Chelsea, has accepted a Ukrainian request to help negotiate an end to the conflict between Russia and Ukraine, his spokeswoman said.

The Western-led response to the invasion has been sweeping, with sanctions that effectively cut off Moscow’s major financial institutions from successive Western markets sending Russia’s rouble currency down 30 % against the dollar on Monday. Countries also stepped up weapons supplies to Ukraine.

Blasts were heard before dawn on Monday in the capital of Kyiv and in the major eastern city of Kharkiv, Ukrainian authorities said. But Russian ground forces’ attempts to capture major urban centers had been repelled, they added.

Russia’s defense ministry, however, said its forces had taken over the towns of Berdyansk and Enerhodar in Ukraine’s southeastern Zaporizhzhya region as well as the area around the Zaporizhzhya nuclear power plant, Interfax reported. The plant’s operations continued normally, it said.

Ukraine denied that the nuclear plant had fallen into Russian hands, according to the news agency.

At least 102 civilians in Ukraine have been killed since Thursday, with a further 304 wounded, but the real figure is feared to be “considerably higher”, UN human rights chief Michelle Bachelet said on Monday.

More than half a million people have fled to neighboring countries, according to the UN Refugee Agency.

There was fighting around the Ukrainian port city of Mariupol throughout the night, Pavlo Kyrylenko, head of the Donetsk regional administration, said on television on Monday.

He did not say whether Russian forces had gained or lost any ground or provide any casualty figures.

A senior US defense official said Russia had fired more than 350 missiles at Ukrainian targets since Thursday, some hitting civilian infrastructure.

“It appears that they are adopting a siege mentality, which any student of military tactics and strategy will tell you when you adopt siege tactics, it increases the likelihood of collateral damage,” the official said, speaking on condition of anonymity.

The Kremlin accused the European Union of hostile behavior, saying weapons supplies to Ukraine were destabilizing and proved that Russia was right in its efforts to demilitarize its neighbor.

“Not only in the presidential administration, but throughout Russia, the vast majority of the population has friends or relatives who live in Ukraine. Naturally, everyone’s hearts are aching for what is happening to these relatives,” Kremlin spokesperson Dmitry Peskov said.

It declined to comment on whether there was a risk of confrontation between Russia and NATO. Russia has demanded that NATO never admit Ukraine.

Germany said it would increase defense spending massively, casting off decades of reluctance to match its economic power with military clout.

Russia’s rouble plummeted nearly 30% against the dollar on Monday, after Western nations on Saturday unveiled sweeping sanctions including blocking some Russian banks from the SWIFT international payments system.

The Russian central bank raised its key interest rate to 20% from 9.5% in an emergency move, and authorities told export-focused companies to be ready to sell foreign currency.

It also ordered brokers to block attempts by foreigners to sell Russian securities.

Several European subsidiaries of Sberbank Russia, majority-owned by the Russian government, were failing or were likely to fail due to the reputational cost of the war in Ukraine, the European Central Bank said.

Britain said on Monday it was taking further measures against Russia in concert with the United States and European Union.

Corporate giants also took action, with British oil major BP BP, the biggest foreign investor in Russia, saying it would abandon its stake in the state oil company Rosneft at a cost of up to $25 billion.

Rolling protests have been held around the world against the invasion, including in Russia, where almost 6,000 people have been detained at anti-war protests since Thursday, the OVD-Info protest monitor said.

The website of Russian state news agency TASS was hacked on Monday, Reuters checks from several devices showed, with the regular site replaced with an anti-war message.

“We urge you to stop this madness,” the message read.

The UN Human Rights Council agreed on Monday to Ukraine’s request to hold an urgent debate this week on Russia’s invasion, minutes after Kyiv’s envoy told the Geneva forum that some of Moscow’s military actions “may amount to war crimes”.

The 47-member council adopted the proposal by a vote of 29 in favor, with five against, including Russia and China.

“Our goal is to be with all Europeans and, most importantly, to be equal… I am sure we deserve it,” he said in a video speech shared on social media.

US President Joe Biden will host a call with allies and partners on Monday to coordinate a united response, the White House said.

Russia calls its actions in Ukraine a “special operation” that it says is not designed to occupy territory but to destroy its southern neighbor’s military capabilities and capture what it regards as dangerous nationalists.

The EU shut all Russian planes out of its airspace, as did Canada, forcing Russian airline Aeroflot to cancel all flights to European destinations until further notice.