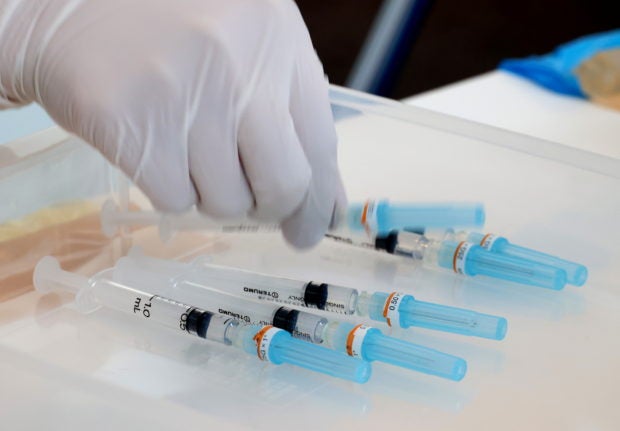 FILE PHOTO: A medical worker picks a syringe to use for the administration of a COVID-19 vaccine. Yoshikazu Tsuno/Pool via REUTERS

MANILA, Philippines — The country’s second nationwide vaccination campaign has failed to meet its target of inoculating 7 million people against COVID-19 despite it being extended for a few more days from the original three-day drive.

According to the National Vaccination Operations Center (NVOC), the second leg of the “Bayanihan, Bakunahan” managed to administer 6,404,622 anti-coronavirus vaccine doses from December 15-22.

NVOC member Dr. Keiza Lorraine Rosario said during the Laging Handa briefing on Thursday that the vaccination drive’s output for December 22 was lower than the past days, as only 992,629 doses were administered that day.

But Rosario said they expect the count to increase once data from areas that proceeded with the vaccinations but were affected by communication line problems brought by Typhoon Odette (international name: Rai) are resolved.

(Based on our data we have administered 992,000 doses yesterday [Wednesday] compared with what we achieved on Monday and Tuesday, this is slightly lower.)

(But we are seeing a trend that because of the typhoon, the submissions of vaccination data were slower because of connectivity issues that our local governments have encountered due to the typhoon.)

Before Wednesday or from December 15-21, the mass vaccination campaign was able to inoculate 5,411,993 vaccine doses.

Rosario pointed out that this was a similar issue that the NVOC encountered in the earlier stages of the Bayanihan, Bakunahan.

“So nakikita natin natin na as several days pass by na nagsa-submit naman ng datos ‘yong mga LGUs (local government units) natin ng mga late reports nila, nabakunahan nila like for example kahapon.  So we still expect that some will submit tomorrow or even the next day after that,” she explained.

(So we are seeing that as several days pass by, some local government units are submitting their data, albeit late reports about how many they have vaccinated. Like for example yesterday.  So we still expect that some will submit tomorrow or even the next day after that.)

Due to Typhoon Odette, some of the provinces and towns in Visayas and Mindanao suspended their respective vaccine drives due to the massive destruction left by the severe tropical cyclone – the strongest to hit the country this year.

READ: Vax drive in 11 regions postponed due to storm

The government said it aims to fully vaccinate 54 million individuals by the end of 2021.  According to acting Presidential spokesperson and Cabinet Secretary Karlo Nograles, the government will hold Bayanihan, Bakunahan on weekends to achieve this target.

As of Wednesday, the government reported that 45.2 million people in the country have already been fully vaccinated against COVID-19.