MANILA, Philippines — Several days in jail after not turning over subpoenaed documents, a Pharmally Pharmaceutical Corp. official on Friday asked senators to file charges against them, saying they “suffer” behind bars even though they are not convicted criminals.

Ong and fellow Pharmally official, Mohit Dargani, were pressed by Senator Risa Hontiveros to identify the location of the boxes containing the firm’s financial documents earlier subpoenaed by senators.

Both Ong and Dargani, who were earlier detained in the Senate compound after senators cited them for contempt, have been staying at the Pasay City Jail since Monday over their continued failure to produce the documents. They were brought to the Senate on Friday to attend the hearing.

“Wouldn’t it be better for you, Mr. Ong, to change your attitude towards the committee, give us the documents in the boxes or tell us who has them?,” Hontiveros asked in Filipino. 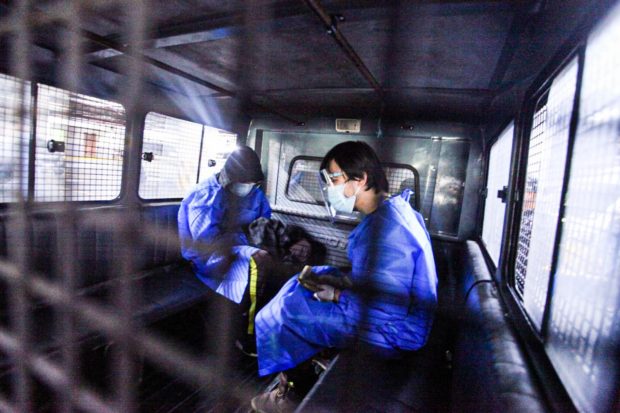 PHARMALLY EXECS ARRIVE IN SENATE: Mohit Dargani and Linconn Ong are escorted by jailers to the Senate for the blue ribbon inquiry on Friday, Dec. 3, 2021. (Senate PRIB)

In response, Ong said he does not have information on the location of the boxes.

“We’re already sent to jail, we’re not criminals. Those files, I really don’t know where they are,” he said.

Hontiveros, however, said it’s impossible for a company that transacted billions in business to not know where the documents were.

As for Senator Richard Gordon, he said the Pharmally officials are “violating the law” by not producing the documents.

“Linconn, do you think we want you to be in jail? You think we’re punishing you?” Gordon asked Ong, who then responded with “Mr. Chairman, I’m begging for your mercy, ‘di naman po kami kriminal [We’re not criminals].”

Ong also noted that the firm is already being investigated by the Bureau of Internal Revenue.

Gordon then reminded Ong that “we live in a world of rules and regulations of laws.”

“You may not be a criminal that shoots people or steals from them when they’re sleeping, but you are nonetheless going to be treated like a criminal because you’re violating the law when you do not answer and you do not produce documents,” the senator said.

“Do not try to get awa (mercy). Wala kayong makukuhang awa. Before we can give awa, kailangan may katarungan muna [You will not get any mercy. Before we give pity, there needs to be justice first],” he added.

Pharmally is at the center of the panel’s investigation after over P8.6 billion supply contracts for pandemic-related items were awarded to the firm in 2020.

Pharmally chairman and president Huang Tzu Yen has previously denied that they were favored in any way in the government’s procurement of medical supplies, saying the small company has been “unfairly prejudged.”