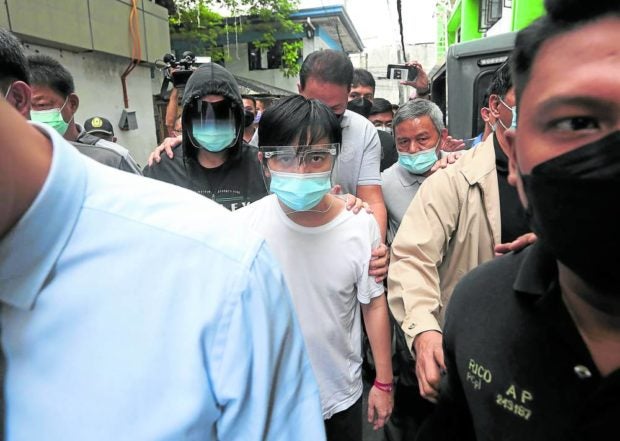 SECURED Pharmally officers Linconn Ong (front) and Mohit Dargani (behind Ong), who are at the center of an investigation into the government purchase of pandemic supplies, arrive at the Pasay City jail on Monday under heavy escort by Senate security personnel. —MARIANNE BERMUDEZ

Two executives of Pharmally Pharmaceutical Corp., the company at the center of a Senate probe of its P11.5 billion worth of transactions with the government for the purchase of pandemic supplies, were put behind bars on Monday for refusing to cooperate in the ongoing investigation.

Pharmally secretary and treasurer Mohit Dargani and director Linconn Ong were officially committed to the Pasay City jail around 2 p.m. on Monday, on the strength of arrest orders issued by Sen. Richard Gordon and Senate President Vicente Sotto III.

“In the exercise of its powers and prerogatives, the committee, when faced with lying witnesses and disrespectful resource persons, is not bereft of compulsory processes to ensure that the institution of the Senate is respected, its honor preserved and its integrity maintained whole,” Gordon said in a statement.

Gordon earlier ordered the transfer of Dargani, his sister Twinkle, who is Pharmally president, and Ong to a jail facility after they failed to produce documents relating to the company’s transactions with the Procurement Service of the Department of Budget and Management (PS-DBM).

On Monday, personnel from the Office of the Senate Sergeant at Arms (Osaa) brought Dargani and Ong to the Pasay City jail, after undergoing a medical checkup and COVID-19 antigen tests, which turned up negative results.

However, Twinkle, who purportedly suffers from mental health issues, will be allowed to serve her detention at the Senate. She was seen by a psychiatric doctor for an initial evaluation of her mental health condition.

Gordon said he pushed through with the transfer of the Pharmally officers to a jail facility after they failed to fulfill a commitment to produce boxes of documents that the Senate committee had subpoenaed, with Mohit giving Osaa personnel conflicting statements on the papers’ exact location.

He said the Senate investigation into the alleged fund misuse by the Department of Health, which transferred some P42 billion for its COVID-19 response to the PS-DBM, “faced obstacles to deter, delay or otherwise sidetrack its course.”

“Mohit and Twinkle Dargani, as well as Linconn Ong, have been evasive in answering questions, uttered lies and spewed falsities, forcing the committee to exercise its rarely used powers of contempt, ordering the incarceration of the three,” he said. 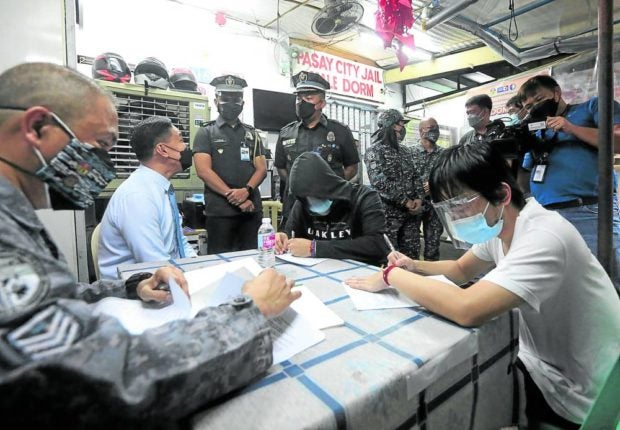 JAIL-BOUND Pharmally Pharmaceutical Corp. executives Linconn Ong (right) and Mohit Dargani (next to Ong, in hoodie) fill out forms at the Pasay City jail where they will be detained starting Monday for refusing to cooperate with the investigation being conducted by the Senate blue ribbon committee. —MARIANNE BERMUDEZ

In a video clip shared by the Osaa, Mohit and Ong were brought to the Pasay City jail in separate vehicles, accompanied by Senate security.

They then walked alongside each other as they arrived at the jail premises with lawyer Roy Kapunan, their counsel, to the jail warden’s office for some paperwork before being ushered into their cells.

“Dargani and Ong will remain under the custody of the Pasay City jail until they properly answer the questions of the senators and submit the documents pertaining to the company’s financial statements that the Senate blue ribbon committee had earlier subpoenaed,” said Osaa chief Rene Samonte.

The Senate blue ribbon committee has sought the documents on the supply contracts they entered into with the PS-DBM, including those for the allegedly overpriced face masks, face shields and personal protective equipment and COVID-19 swab test kits, amid allegations that Pharmally was given undue preference and advantage by the procuring agency.

Senators have also been trying to trace the paper trail of the importation of the pandemic supplies reportedly delivered by Pharmally, amid indications during the past hearings that these were sourced from fictitious suppliers and were believed to have been smuggled into the country.

Pharmally executives have also failed to produce documents to back their claim of having donated up to P33 million to various persons and entities, which, the senators found out, were not covered by deeds of donation.

Senators have been pressing Pharmally officials to show documents disproving allegations that they evaded paying taxes for the contracts they received from the PS-DBM. INQ