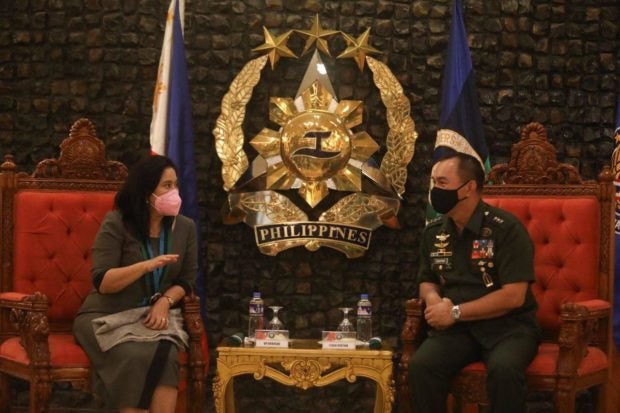 MANILA, Philippines — Vice President Leni Robredo on Friday clarified her position about the government’s counter-insurgency task force, saying that while she supports its mandate, certain members of the body put it in bad light.

During a security meeting given by the newly-appointed officials of the Armed Forces of the Philippines (AFP), Robredo was briefed about the anti-insurgency campaign of the military — geared at providing a “whole-of-nation approach towards economic development and social progress to the countryside”.

In that meet, Robredo claimed that while she initially supported the abolition of the National Task Force to End Local Communist Armed Conflict (NTF-ELCAC), she  remained supportive of the body’s mandate, including the Barangay Development Fund project.

“I want to address the elephant in the room kasi I’ve been quoted so many times already that I’m for the abolition of NTF ELCAC. And I want to emphasize today that I am all for the mandate and the functions of ELCAC. In fact, yung Barangay Development Fund,” Robredo was quoted as saying in a statement sent by the Office of the Vice President (OVP).

“I think that’s the best part of everything. Paniniwala ko, talagang it is only through concepts like this that the problems of insurgency can be addressed upfront,” she added.

According to Robredo, the NTF-ELCAC has been cast in a bad light because of the “careless statements of some of the members,” who have been accused of red-tagging a range of individuals from celebrities to activists.

However, she noted that most members of the task force are really working to address the root cause of the communist armed struggle.

“Ako mismo, I’ve been on the receiving end of unfair accusations. I’ve been red tagged and the red tagging has been baseless. Kaisa nyo ako sa pagsubok na masugpo ito (insurgency) by addressing the core of these problems, and the peripheral issues surrounding it,” she said.

Robredo’s statement slightly differs from her position made last November 9, in a forum hosted by the Rotary Club of Makati, that she believes the task force should be abolished as it has been used to abuse and harass people.

She even likened NTF-ELCAC to the current administration’s Oplan Tokhang, the anti-drug campaign that is being criticized for alleged human rights abuses.

Robredo said that she is also congratulating the AFP leadership for a “job well done” — adding that OVP’s projects do not differ from the organization’s goal to address social injustices and inequality.

“[This visit] is really to thank you and congratulate you for a job well done… You have really been rendering the Filipino people with the service we all deserve,” Robredo said. “And that’s basically the main idea, [which is] really to work with the local government units to do projects that will address not just the social injustices but the inequality that has been happening.”

For the past 50 years, the Communist Party of the Philippines (CPP) and its armed wing, the New People’s Army (NPA), have been waging a war with the government, as it pushes for certain reforms and advocacies. It has been labeled as a terror group for a number of violent activities.

NTF-Elcac, meanwhile, was established to promote development in barangays or communities allegedly being terrorized by the rebels.

Exacerbated by the red tagging incidents that the task force had been accused of, several lawmakers claimed that NTF-Elcac’s funding should be stripped off.

The anti-communism unit has a proposed budget for 2022 worth P28 billion, but the Senate claimed that this is just a “pork barrel,” leading the upper chamber to slash its funding to just P4 billion. Senator Sonny Angara, who sponsored its budget said he felt compelled to greatly reduce the agency’s budget as it was unable to properly explain how it spent its P19 billion budget for this year.