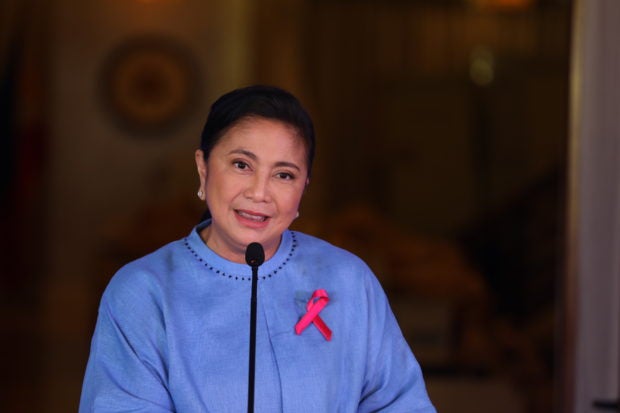 FILE PHOTO: Vice President Leni Robredo when she formally announced her bid for the presidency in the 2022 national elections before her staff and supporters in a brief ceremony held at the Quezon City Reception House on Thursday, October 7, 2021. (Photo by OVP)

MANILA, Philippines — Vice President Leni Robredo has vowed to abolish the controversial anti-insurgency task force of the Duterte administration and instead endeavor a “conducive environment”  for peace talks with insurgents.

If she becomes the next president via the May 2022 elections, Robredo said she would veer away from purely “militarist approaches to ending internal armed conflict.”

During an online forum hosted by the Rotary Club of Makati on Tuesday, Robredo explained that there appears to be a duplication of mandate with the National Task Force to End Local Communist Armed Conflict (NTF-Elcac) as she raised fears that the authority given to the body “will be abused, used to harass people.”

She even likened NTF-Elcac to the infamous “Oplan Tokhang” of the Duterte administration, which received heavy criticisms and condemnations for the alleged thousands of deaths in the name and in the guise of anti-drug operations.

“There is really a duplication of many efforts, the duplication of the mandate and it has to be abolished,” Robredo said, referring to the NTF-Elcac, which proponents insisted was principally for the development of barangays across the country.

(My biggest fear here is that this would be a Tokhang version 2 in the sense that the mandate given to the body will be abused, used to harass people.)

Robredo said she would deal with the insurgency problem by first calling for “a complete cessation of hostilities and violence” in order to establish an environment that is favorable for stakeholders to return to the peace table.

“I am demanding not just from the CPP-NPA-NDF but also from the government to create a more conducive and enabling environment for peace negotiations to resume. There must be a call for a complete cessation of hostilities and violence, and to spare communities in conflict-affected areas, there must be a rejection of the militarist approaches to ending internal armed conflict,” Robredo said.

“And instead encourage strong participation of CSOs (civil society organizations), the private sector, the church, in the peace process. ‘Yong nangyayari kasi ngayon parang sobrang emphasis on a purely militaristic approach,” she added.

For the past 50 years, the Communist Party of the Philippines (CPP) and its armed wing, the New People’s Army (NPA), have been waging a war with the government, as it pushes for certain reforms and advocacies. But the CPP-NPA has been labeled as terrorists for its various violent activities such as torching establishments and ambuscades which not only killed members of the military but also victimized innocent people.

NTF-Elcac, meanwhile, was established to promote development in barangays or communities allegedly being terrorized by the rebels.

But several lawmakers claimed that NTF-Elcac’s proposed budget for 2022, worth P28 billion, was just a pork barrel. The Senate even slashed the task force’s funding to just P4 billion as Senator Sonny Angara said the agency was unable to properly explain how it spent its P19 billion budget for this year.

According to Robredo, the government should have instead targeted the improvement of basic services and resolution of the root cause of the insurgency: poverty.

“Improve the targeting and increase of resources for basic services in communities with special focus on conflict-affected areas, ‘pag sinabi nating (when we say) services, that would include education, health, social protection, basic infrastructure for livelihood, communication and connectivity, microfinance,” she stressed.

“And also strengthen government reintegration programs for former rebels’ families and communities, to allow them to live peaceful and productive civilian lives.  Para kasi sa akin (For me), this cannot be solved by a purely militaristic approach, we have to go to the root of the problem of insurgency to be able to give a more long-term solution,” she also said.