Breaking the promise of peace, Duterte turns from rebel ‘friend’ to worst foe 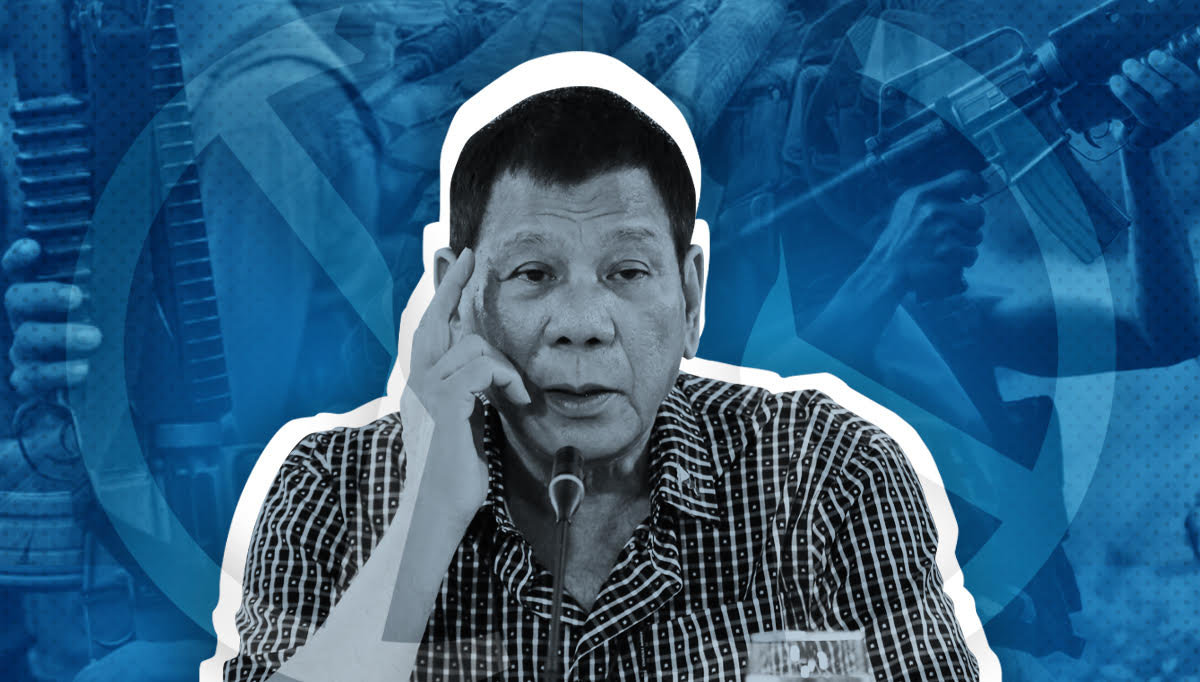 MANILA, Philippines—As Rodrigo Duterte ascended to the presidency in 2016, he was seen as “uniquely placed” to bring a peaceful end to the communist insurgency because of his relationship with guerrilla leaders in the Davao area as mayor of Davao City.

Many instances of guerrilla captives being released had been credited to the then mayor. At one point during the campaign and after he won, Duterte had described himself as a “socialist at heart.”

Those days, however, are history. The Duterte we now know has sworn to destroy insurgents by the time he steps down next year—at all costs.

This included the designation by the Anti-Terrorism Council (ATC), a body created by the controversial terror law still being questioned in the Supreme Court, of National Democratic Front of the Philippines (NDFP) as a terror group.

ATC, which has an almost judicial-like authority to order arrests and detentions, said NDFP, an umbrella organization of underground groups fighting the government, was an “integral and inseparable part” of Communist Party of the Philippines (CPP) and New People’s Army (NPA) which are already on the terror list.

ATC said members of NDFP “continue to lure and recruit people to join the NPA” and that “the CPP itself admitted and maintained, through public media releases as well as in CPP documents and revelations of former members, the direct and indispensable role of NDF in its armed operations.”

Resolution No. 21, which was dated June 23 but was released to media just recently, followed the designation of CPP-NPA and 29 individuals as terror groups and terrorists, which NDFP condemned as a “desperate act to vilify revolutionaries and cover up the crimes of state terrorism committed by the Duterte regime.”

NDFP, established in 1973, has been initiating peace talks with the government since 1992 “to address the roots of the armed conflict.” Its most significant responsibilities, NDFP said, included the promotion of national unity for the revolutionary struggle.

In a February 2021 report, security analyst Jack Broome said that Duterte was seen as “uniquely placed to secure a resolution to the communist insurgency due to his past involvement with radical socialist organizations and his personal connection with [Jose Maria] Sison,” his former professor.

In 2019, the President even said that he considered the insurgents as his “friends,” saying that he was able to establish good relations with them and that he could not be harsh in dealing with them.

However, in his presidency, what transpired was the contrary—Sison, his wife, and other peace consultants were listed as “terrorists” and the CPP-NPA-NDFP was designated as “terror groups.”

In his campaign trail, the President made promises to bring a peaceful resolution to the insurgency, including his intention to release political prisoners. Broome said that “indeed, Sison believed that if Duterte were elected, then peace could be achieved.”

Former NDFP chair Luis Jalandoni, in a May 2016 interview with then radio station dzMM, said Duterte was set to grant amnesty to all political prisoners in a bid to end insurgency in the Philippines.

In August of that year, 22 political prisoners were temporarily released for the opening of the peace negotiations. Five years later, no one was granted amnesty.

The individuals who were freed through bail included Benito Tiamzon and Wilma Tiamzon who were convicted by a Quezon City court of kidnapping and serious illegal detention. Groups supporting the couple said the charges were fabricated.

Data from the human rights group Karapatan said that as of June 2021, there are 713 political prisoners in the country, 11 of which are consultants and staffers of the NDFP.

The President’s promise of peace was also tainted with various rights violations, including the extrajudicial killing of 414 activists, 15 of which were part of NDFP.

In 2020, peace consultant Randall Echanis was killed inside his house in Novaliches, Quezon City. In May, three senior NDFP consultants were also slain in the Visayas—Fr. Rustico Tan, Reynaldo Bocala and Willie Arguelles.

Gov’t use of insurgency threats

During Duterte’s regime, four rounds of peace talks were held in Norway, Italy, and the Netherlands. It resulted in historic ceasefires and a plan to have Sison’s name removed from the terror list. In 2016, the government and NDFP agreed on a framework for the Comprehensive Agreement on Social and Economic Reforms (CASER).

The peace talks, however, were terminated following the government failure to release political prisoners. In 2017, Sison said there was no longer any need for peace talks.

In November of that year, the President signed Proclamation No. 360 which declared the termination of peace talks with communist rebels. The next month, he formally declared CPP-NPA as a terrorist group. In 2019, he said that he is permanently ending the peace talks and had repeated his stand several times.

For Broome, it was evident that the President was politically motivated in the peace process: “[It] was made clear by the rather tortuous attempts he made to revive negotiations with the CPP.”

However, he said that the threats of insurgency provide a useful political device against detractors and legitimize some of the government’s controversial policies.

“For the AFP, the communist insurgency provides a key part of its raison d’être (fundamental reason) and, more importantly, one of the main justifications for its bloated budgetary requirements,” he added.

Peace talks through the years

In the Philippines, peace talks had a significant role in addressing the “roots of the armed conflict,” but through the years, talks remained at a standstill. Since 1986, over 40 peace negotiations have been held between the government and the NDFP.

During Corazon Aquino’s presidency in 1986, preliminary peace negotiations were held. It was in 1992, Fidel Ramos’ regime, when an amnesty proclamation was signed.

It was also under Ramos, former armed forces chief, that the Joint Agreement on Safety and Immunity Guarantee (JASIG) and the Comprehensive Agreement on Respect for Human Rights and International Humanitarian Law (CARHRIHL) were signed.

The JASIG was reinstated in Gloria Macapagal-Arroyo’s term, but the peace talks broke down after CPP-NPA was included on the terrorist list of the US government.

There were five peace talks during Arroyo’s presidency which resulted in the formation of the Joint Monitoring Committee of the CARHRIHL. However, as the US retained the CPP-NPA on its list, peace talks were terminated.

In Benigno Aquino III’s term, the peace talks resumed and it resulted in the declaration of a holiday ceasefire. However, the talks ended after NDFP’s demands were rejected by the government.

In 2014, informal talks were carried out by private emissaries with the guidance of the Office of the Presidential Adviser on the Peace Process to revive peace talks. However, these failed to prosper due to the issue of prisoner release.