Drilon to Bato on NTF-Elcac abolition: ‘Stick to the issue’ 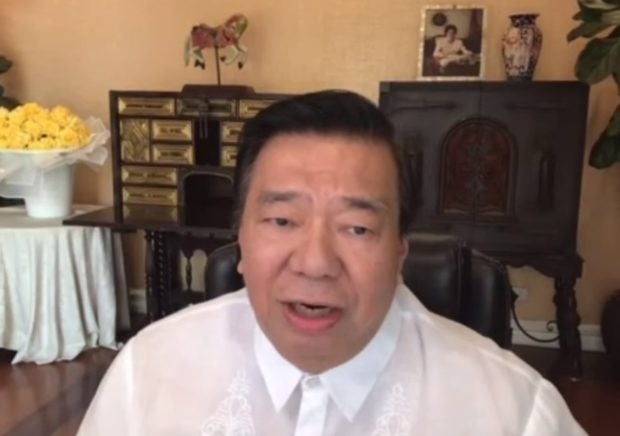 During his tirade, Dela Rosa called the senators who are pushing for the NTF-Elcac’s abolition “bwisit” (nuisances).

(It is unfortunate that our colleague in the senate uses ‘bwisit’. This is a debate for the welfare of the people and we are looking at how the people’s money is spent.)

(I, for one object. I don’t think that means I’m a nuisance. Enough with the personal insults, let’s just talk about it.)

In a separate statement, Drilon then further advised Dela Rosa to stop the name-calling, as “it will not get us anywhere.”

“It is an insult to the senators and the institution we belong to. Let’s stick to the issue,” Drilon said.

Drilon then disputed claims made by Dela Rosa where he accused fellow senators who want the NTF-Elcac abolished as using the issue to boost their political agenda.

He then enumerated a number of reasons why he is opposing the NTF-Elcac and supporting the decision of the Senate Finance Committee to slash its funding to P4 billion from P28 billion.

According to Drilon, COVID-19 booster shots remain unfunded in the proposed General Appropriations Act, while P45 billion is allocated for the purchase of COVID-19 vaccines under the unprogrammed fund.

He explained that it is best to rechannel the funds in support of the government’s pandemic response such as the procurement of COVID-19 booster shots, as well as the provision for “ayuda” or aid — as there is also no funds for such.

Drilon also emphasized that barangays are beneficiaries of regular programs implemented by line agencies, meaning that they will still benefit from increased internal revenue allotments next year.

He said this after he noted that P16.2 billion of NTF-Elcac’s 2021 P19 billion fund went to the Barangay Development Fund.

He then pointed out that only 26 out of 2,318 approved projects supposedly for barangays cleared of the insurgency were finished.

Drilon also criticized the agencies’ utilization of their NTF-Elcac funds in the Philippine National Police (PNP) where they received a P1 billion allocation but conducted only about 13 million activities in 10 months.

He also cited a huge disconnect in the way the Department of National Defense and the Armed Forces of the Philippines are left out in the implementation of the country’s anti-insurgency programs.

Drilon said he could not believe that the AFP, which is tasked to fight insurgency, was only given P199,000 from the NTF-Elcac allocation, while the PNP received a whopping P1 billion.

Meanwhile, Dela Rosa also earlier warned that the huge budget cut may give the impression that the Senate is supporting the NPA.

Other senators, however, have repeatedly explained that the reduction was because there were questions on how the task force is spending its huge budget.

Angara doubts NTF-Elcac funds can be used for elections