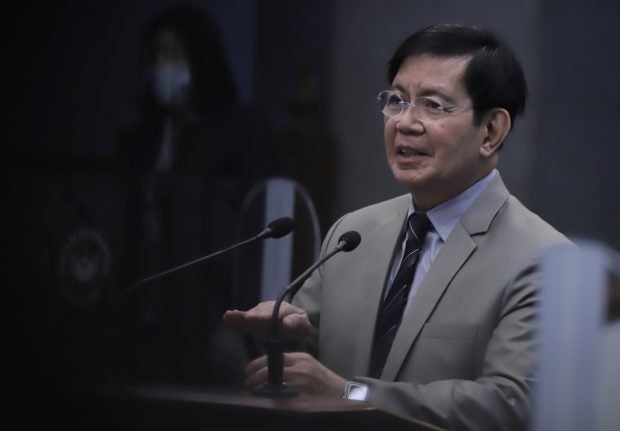 MANILA, Philippines — Senator Panfilo Lacson on Thursday admitted that he regretted supporting the budget of the government’s anti-insurgency task force, which he said is playing favorites in funds distribution.

In an interview over ABS-CBN News Channel, Lacson was asked pointblank if he regretted supporting the Anti-Terror Law as well as the budget of the National Task Force to End Local Communist Armed Conflict (NTF-Elcac), which is carrying out the counter-insugency measures.

“NTF-Elcac yes, meron akong mga frustrations because of what I’ve been hearing from the other LGUs (local government units),”  he said.

From P19 billion this year, the anti-insurgency task force has been allotted P28.1 billion in the  proposed national budget next year.

Lacson said the proposed budget for the task force in 2022 was a “bit too much,” noting there were still unutilized funds this year.

Its budget would have been “worth supporting” if the concept of the NTF-Elcac‘s concept of fighting insurgency by way of development was only followed, he said.

“Pero dahil nga sa implementation, merong favoritism at namimili kung sino, again, kung sino ang kaalyado sinong gustong tulungan, dun ang bibigyan ng maraming pondo,” he pointed out. “There’s something really very wrong in the implementation. So again we have to scrutinize, we have to look at itemized budgeting for the NTF-Elcac and they will have to justify.”

(But because of the implementation, there’s favoritism and they choose the recipients, and  allies who get more funds.)

According to the senator, there were LGUs that received more funds from the task force, such as Davao City, President Rodrigo Duterte’s hometown.

But no less than presidential daughter and Davao City Mayor Sara Duterte has said they do not need the P1.5 billion budget from NTF-Elcac since there were no surrenderees anyway in their area, Lacson said.

Davao del Norte with 2,000 surrenderees, on the other hand, had zero budget from the task force, the senator further noted.

Lacson, meanwhile, stood firm on his support for the Anti-Terror Act.

“No. I don’t have any regrets at all because I still believe it’s a very good law. But a good law being implemented by a bad government, that’s another matter,”’ he said.

“But why blame the law itself? Maglagay na lang tayo ng how to institute checks and balances,” he went on.