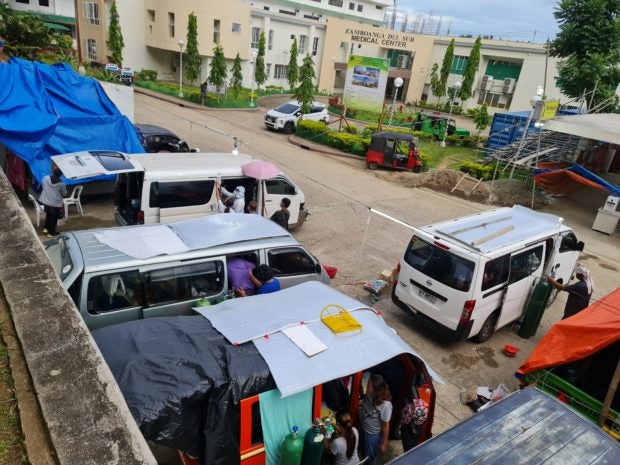 The Zamboanga del Sur Medical Center had run out of beds since Aug. 16 but it continued to treat COVID-19 patients in tents and private vehicles parked outside the hospital building as shown in this Sept. 5 photo. The hospital issued an advisory on Sept. 3, saying it could no longer accommodate more patients. PHOTO COURTESY OF DR. RAMON BLANCIA

PAGADIAN CITY, ZAMBOANGA DEL SUR—After almost a month of dealing with COVID-19 patients, more than 60 healthcare workers, including the head of the province’s main COVID-19 referral facility here, are getting sick.

Dr. Anatalio Cagampang Jr., chief of the Zamboanga del Sur Medical Center (ZDSMC), confirmed Tuesday that he and 60 other healthcare workers, including some doctors and nurses, tested positive for COVID-19.

Felipe Son Jr. took over as ZDSMC officer-in-charge as Dr. Cagampang, who was already feeling sick and exhausted on Wednesday, Sept. 9, got admitted at the facility along with his wife and child.

Cagampang was admitted six days after issuing an advisory on Sept. 3, saying the hospital could not take in more patients as it was running beyond capacity.

ZDSMC had run out of COVID-19 beds since Aug. 16 but continued to accept patients, treating them inside tents and vehicles parked outside the hospital building.

After many of their team members got admitted, Son said the hospital was already understaffed. 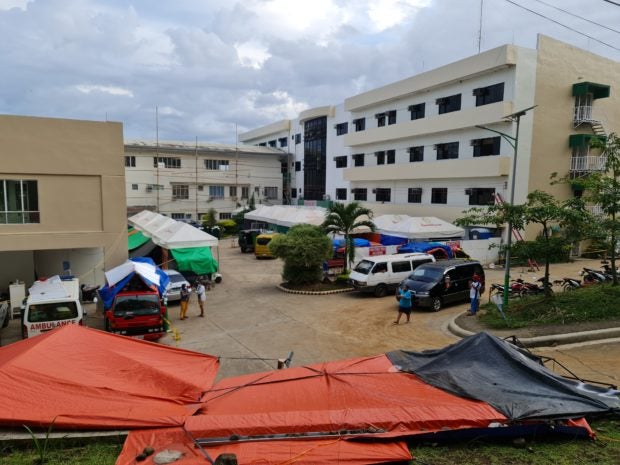 The Zamboanga del Sur Medical Center had run out of beds since Aug. 16 but it continued to treat COVID-19 patients in tents and private vehicles parked outside the hospital building as shown in this Sept. 5 photo. The hospital issued an advisory on Sept. 3, saying it could no longer accommodate more patients. PHOTO COURTESY OF DR. RAMON BLANCIA

“With the current situation, when our Emergency Room is overflowing with patients, the remaining workforce wants a time out from hospital service as they’re getting exhausted from the surge,” Son said.

Aside from COVID-19 beds, the hospital is also running out of medical oxygen and medications such as Tocilizumab.

Dr. Arnel Lerias, head of the local government-run Pagadian Infirmary, told the Inquirer that patients with mild COVID-19 symptoms would need one medical oxygen tank per day. Those with moderate ones would consume up to three tanks a day.

He said those with severe symptoms and were considered critical could consume up to 12 tanks a day, which was alarming as medical oxygen was getting scarce at the moment, Lerias added.

Cagampang, in an earlier interview, expressed the need for a stricter quarantine status in the province to control the surge of cases.

As early as Aug. 22, and alarmed by the rise in cases, the Zamboanga del Sur Inter-Agency Task Force had asked the National IATF for a stricter quarantine status.

Cagampang did not rule out the possibility of a collapse of the healthcare system in the province, as hospitals get overwhelmed with COVID-19 patients.