Senate documents say only 26 of 2,318 NTF-Elcac projects were completed 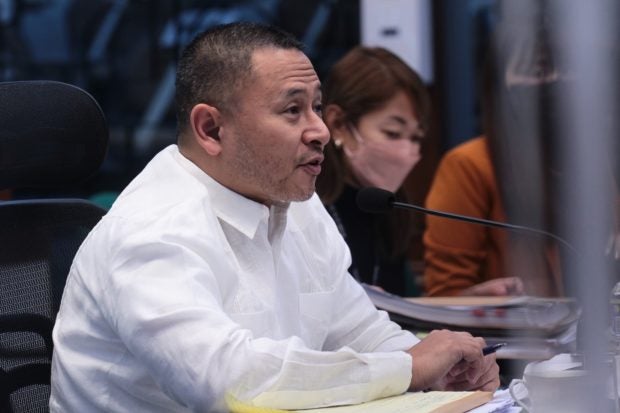 MANILA, Philippines — Only 26 of the total 2,318 projects under the National Task Force to End Local Communist Armed Conflict (NTF-Elcac) Barangay Development Fund worth P16.4 billion have been completed, documents sent to the Senate revealed.

The documents shown by Senate finance committee chair Senator Sonny Angara during the hearing of the Department of Budget and Management (DBM) proposed budget on Thursday also showed that 900 projects are still in the pre-procurement stage.

There are also 700 more are in the procurement stage while 560 are still being implemented.

“And according to the letter received, of the 2,318 projects to be funded by the P16.4 billion barangay development fund, only 26 have been completed as of today Mr. President.  And the rest are in various stages of completion, there are I think over 900 in the pre-procurement stage,” Angara told Senate President Vicente Sotto III who inquired about NTF-Elcac’s explanation.

“There are over 700 which are in the procurement stage, and there are 560 which are ongoing implementation,” Angara added.

Angara read the documents after Sotto asked whether NTF-ELCAC had already sent out its explanation, which in turn was a reaction to Senator Ronald dela Rosa’s outburst about the Senate’s decision to cut the agency’s funding.

Dela Rosa previously warned that the Senate could be seen as a supporter of the New People’s Army, if the NTF-Elcac’s projects aimed at ending communist insurgency and ushering development to communities are halted.

Sotto in response said that cutting the NTF-Elcac funding does not stem from their mandate, but from its failure back then to explain how they used their funds.

Angara shared Sotto’s views, saying that when the NTF-Elcac funds were cut by P24 billion, they did not have a copy of the report.

“But to give background to what the committee did when it cut the budget of the NTF-Elcac, is we had no way of knowing because there was nothing before us.  We requested all the agencies to submit something, but when we did the cut last week, we had nothing, we had no information.  This information I’m reading, we only received this Monday,” he added.

But dela Rosa questioned why NTF-Elcac is being singled out, when other agencies have a lot of unfinished or unimplemented projects too.  In response, Angara said that what they have been doing to NTF-Elcac applies to other agencies who also fail to submit their funding details and those who have a low implementation rate.

Angara also noted that they had to find funding for concerns of health workers and the COVID-19 response itself — which means NTF-Elcac’s slashed proposed funds would go to the health sector now.

“Wala pong pondo of special allowances of our health workers, na mainit na issue at that time, because they were threatening to boycott hospitals […] We had to source P51 billion out of existing funds, we cannot just say na ‘oh, by the stroke of the pen we add P51 billion to the budget of the government of the Philippines.  Hindi po natin pwedeng gawin ‘yon,” Angara added.

The NTF-Elcac, an office created to usher in development to the countryside to stop the communist influence and insurgency, has been criticized for allegedly being a pork barrel of government agencies inside it.

Several individuals including Vice President Leni Robredo have supported moves to abolish the NTF-Elcac, as the program supposedly is an avenue for the state to abuse and harass its critics.