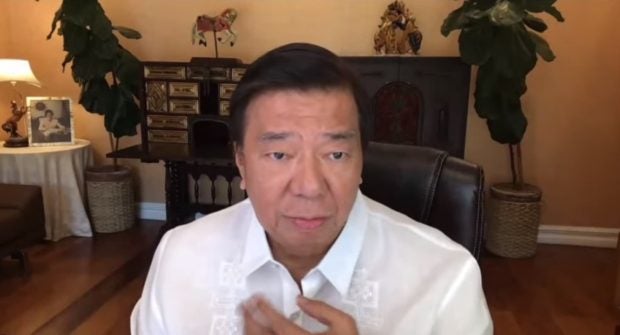 MANILA, Philippines — Senate Minority Leader Franklin Drilon is finding it unusual that the allocation for the Department of National Defense (DND) from the 2021 budget of the National Task Force to End Local Communist Armed Conflict (NTF-Elcac) was only P199,000.

“That’s unusual. Really unusual… I don’t think it’s fair and equitable,” Drilon said during the plenary debates on the budget of the DND’s proposed 2022 budget.

“I cannot believe that the agency in charge of our internal security will get only P199,000,” he added.

In 2021, the NTF-Elcac received a P19-billion budget, over P16 billion of which is allotted for the development of barangays that the government declares as cleared of insurgency.

According to Senator Ronald “Bato” dela Rosa, the sponsor of DND’s proposed 2022 budget, the P199,000 was lodged under the Office of the Secretary of National Defense.

This, after Drilon questioned why the DND has yet to disburse a “single peso” of the NTF-Elcac funds given to it in 2021—which he initially thought amounted to P199 million.

“It is true that it’s not yet fully obligated and fully disbursed because kayang-kaya naman nila itong i-obligate within the remaining months, the P90,000 and the P109,000,” he added.

At this point, Drilon asked Dela Rosa to double-check the amount. But the latter reaffirmed that only P199,000 was given to the DND from the 2021 NTF-Elcac budget.

But the Senate minority leader said this should not be the case, pointing out that the engineering unit of the Armed Forces of the Philippines (AFP) can be tapped for the construction of roads in areas influenced by insurgents.

“I totally disagree. The engineering corps of the AFP (Armed Forces of the Philippines) is the one of the most sought after units for purposes of building roads in NPA (New People’s Army)-infested areas. May kakayahan po sila kaya hindi po ako naniniwala na ito’y para sa coordination lamang,” Drilon said.

“Anyway, if that is the position taken by the sponsor, I cannot be more popish than the pope for the principal agency in charge of our internal security…only gets less than 200,000. Talagang sa akin po, mali ang priorities,” he added.

“We should support these efforts of AFP as they have the capacity to execute these projects in cleared barangays. And yet they are only given 199,000,” he further said.

In response, Dela Rosa said the DND leadership will submit a written explanation relative to the department’s share in the NTF-Elcac funds.

“I’m sorry, Mr. Sponsor, no amount of explanation will convince me that this is a fair and equitable allocation of resources for the principal agency involved in our internal security, you would have 199,000,” Drilon continued.