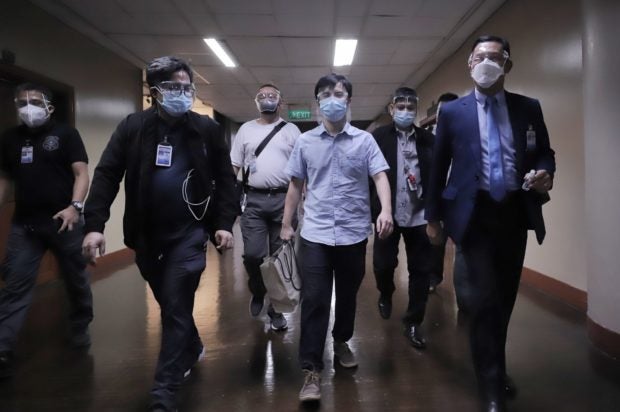 (This is a partial report only and I don’t want this to be the reason people will rush the investigation. There were a lot of people involved…Michael Yang, Christopher Lloyd Lao, Warren Liong, and Pharmally Pharmaceutical directors and officers.)

Lao served as the officer-in-charge of the Procurement Service of the Department of Budget and Management (PS-DBM) until he resigned in June this year. Liong, meanwhile, was a former PS-DBM director.

According to Gordon, the possible charges that could be filed against Yang and Pharmally executives Linconn Ong and Krizle Mago include perjury or false testimony.

He also said former officer-in-charge of the inspection division of the Procurement Service-Department of Budget (PS-DBM) Jorge Mendoza and PS-DBM Inspector Mervin Tanquintic may be liable for falsification of public documents.

In a previous hearing, they admitted that at least two inspection reports were signed even though the supplies were still in China for the government’s orders of personal protective equipment sets (PPEs).

The senator, however, clarified that these are still part of the committee’s preliminary findings.

At the height of the pandemic last year, the blue ribbon committee has been investigating the government’s purchases of medical goods, including allegedly overpriced face masks, shields and other supplies.

During the inquiry, senators have repeatedly questioned the Department of Health’s transfer of P42 billion to the Procurement Service of the Department of Budget and Management to procure pandemic response supplies in 2020.

A portion of this amount went to over P8.6 billion worth of contracts awarded to Pharmally. Senators doubted the firm’s financial capacity since it was only established in 2019 with a small capital of P625,000 when it secured the supply deals.

Meanwhile, Yang’s name first turned up in the Senate investigation after a 2017 video showed him introducing Pharmally officials to President Rodrigo Duterte in Davao City.

It was disclosed that Pharmally borrowed money from Yang to help the firm fulfill some of the government’s orders last year.

But Yang maintained that he did not finance Pharmally, claiming that his role was to introduce Ong to suppliers in China who could provide financial support.

Pharmally chairman and president Huang Tzu Yen, for his part, has previously denied that they were favored in any way in the government’s procurement of medical supplies in 2020, saying the small company has been “unfairly prejudged.”