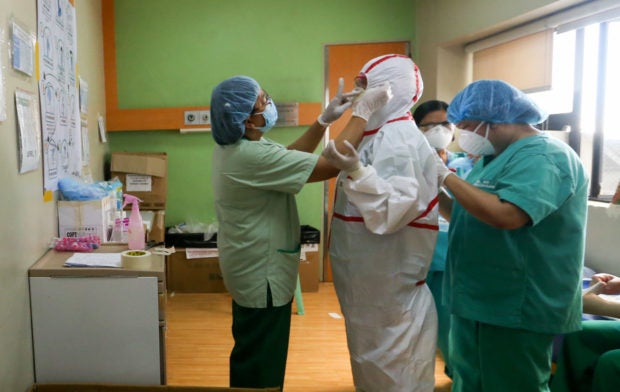 Health personnel assigned to the pay ward COVID-19 methodically donning PPEs, masks, etc. sealed in with tapes at small openings to protect them from contracting the SARS-COV-2 from patients with COVID19 confined in UP-PGH.
INQUIRER FILE PHOTO / LYN RILLON

MANILA, Philippines — In at least two instances, the inspection report for the government’s orders of personal protective equipment sets (PPEs) were already signed even if the supplies were still in China, senators learned Monday.

Jorge Mendoza III, former officer-in-charge of the inspection division of the Department of Budget and Management-Procurement Service (DBM-PS), told senators he was instructed at least twice to prepare and sign inspection reports in the Philippines for PPE supplies that were still in China.

Mendoza admitted that this goes against their inspection process. “This is not normal procedure.”

“During [the] pandemic…there was no talagang supply of PPEs, we have to resort to China,” the former DBM-PS official said during Senator Francis Pangilinan’s questioning.

(During the pandemic, there was really no supply of PPEs, we have to resort to China.)

“Wala pang delivery but we were advised, instructed to prepare the inspection document, considering nga po na it will be an attachment…an assurance to China suppliers na sila po ay babayaran, once the shipment or yung PPEs will arrive sa Pilipinas,” he added.

(There was no delivery yet but we were advised, instructed to prepare the inspection document, considering that it will be an attachment…an assurance to China suppliers that they will be paid once the shipment or the PPEs will arrive in the Philippines.)

“Two suppliers, two inspection reports,” he further said. However, the number of PPE units involved was not disclosed during the hearing.

Pangilinan then asked Mendoza if the PPE sets were delivered only after payments were made to the Chinese suppliers.

The former DBM-PS official answered in the affirmative.

When pressed on the identity of the official who instructed him to do so, Mendoza said it was former DBM-PS accounting chief Raul Catalan.

“From the explanation…at that time there was very scarce po yung supply,” Mendoza noted.

Pangilinan asked the blue ribbon committee to subpoena Catalan to air his side on the matter.

Tanquintic, however, told senators that the supplies were jointly inspected and accounted for by the DBM-PS and the Department of Health (DOH) once they were delivered to the country.

The Senate blue ribbon committee is currently investigating the procurement of “overpriced” personal protective equipment, face masks and shields made by DBM-PS on behalf of the DOH last year.