Ex-procurement chief insists no overprice in purchase of PPE supplies 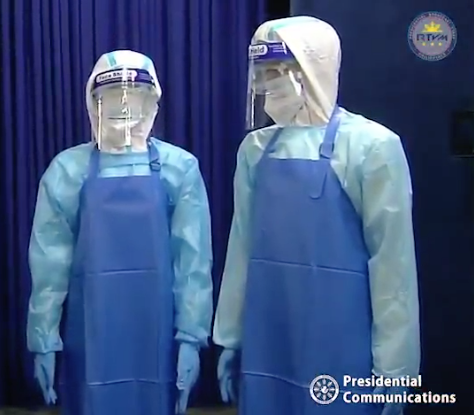 Mannequins wearing complete PPE suits that were procured by the Duterte government were used as props by presidential spokesperson Harry Roque, Jr. during his briefing in Malacanang last September 6, 2021 to belie claims of overprice. Screengrab from RTVM

MANILA, Philippines — The former procurement director of the Department of Budget and Management (DBM) insisted that the face shields procured at the start of the pandemic were not overpriced as alleged, considering that it was even a few centimos below the price ceiling set by the Department of Health at that time.

Lawyer Warren Lex Liong, now Overall Deputy Ombudsman, appeared before the House committee on good government and public accountability hearing on Wednesday to explain the side of the government during the ongoing investigation on alleged overpriced pandemic supplies like face masks and personal protective equipment (PPE) sets.

According to Liong, the price ceiling set by the Department of Health (DOH) during that time was P28. The face masks sold by Pharmally Pharmaceutical Corp. — the subject of the Senate blue ribbon committee probe — were at P27.

(Were the face masks and PPEs bought by the government in 2020 really overpriced? No, because the prices of face masks skyrocketed at the start of the pandemic, DOH placed a prize freeze of P28.  Government then bought it at P27.72.)

On the issue of whether the government had local suppliers with less expensive options compared to Pharmally, Liong mentioned that EMS — which sold its face masks for only P13 — was only able to deliver on June 1 despite the contract being signed on April 27, and the delivery date set on May 25.

In contrast, Pharmally was able to deliver as early as March — although the issue has been contested because it was revealed during the Senate hearing that the company sourced from other suppliers just to provide masks to the government.

“(Was there overpricing?) Wala po. Noong April 2020 nagkakahirapan po tayo sa supply. ‘Yon pong supply natin sa ating na-awaradan na si EMS, it was only delivered in June 1. The contract was entered in April 27, 2020, and then the first delivery was supposed to be scheduled on May 25 — that’s about more than a month, and the actual delivery was done on June 1, 2020,” Liong explained.

(There was no overpricing because last April 2020 we found it difficult to source supplies. The supply contract granted to EMS was only delivered in June 1. The contract was entered in April 27, 2020, and then the first delivery was supposed to be scheduled on May 25 — that’s about more than a month, and the actual delivery was done on June 1, 2020 )

“So as you can see, it was not immediately available,” he added.

Liong further said that the PPE sets procured by the past administration was over P3,000, claiming that the contents of the old procurement and the most recent PPE purchase were virtually the same.

“It is not overpriced and it was cleared with more reason po. Ang P1,910, procured during pandemic, procured using emergency procurement, is reasonable,” he added.

The same PPE sets were mentioned by presidential spokesperson Harry Roque to disprove claims that the current administration’s PPE purchases were not overpriced, citing that there was no pandemic in 2015 and 2016 that drove production high.

But Abigail Valte, spokesperson of late former president Benigno “Noynoy” Aquino III, retaliated by releasing details of the 2015 and 2016 PPE sets procurement, adding that the materials were of high standards.

The House panel is probing the possibility of the pandemic supplies being overpriced, after a Commission on Audit (COA) report flagged the P42 billion fund transfers made by the DOH to the DBM’s Procurement Service (PS-DBM).

COA Chairperson Michael Aguinaldo however clarified earlier that the audit report on PS-DBM concerns more about the inventory management, saying that overpricing was never mentioned.

The overpricing concerns were raised in the Senate hearing which showed that a huge chunk of the funds was used to buy equipment from Pharmally Pharmaceutical Corp., which sold items more expensive than other companies.

Almost P8.7 billion of the funds were transferred to Pharmally, which was revealed to have a small capital of P625,000.