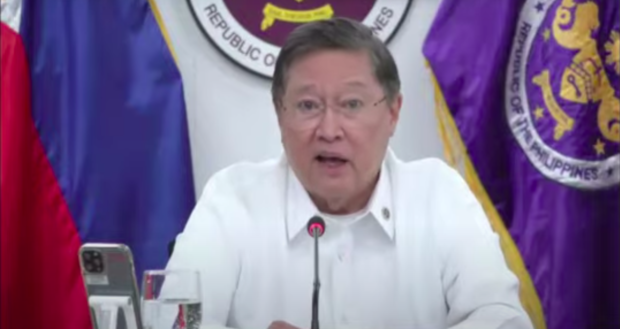 Finance Secretary Carlos Dominguez during the Senate committee on finance hearing on the 2022 national expenditure program. Screengrab from Senate livestream

MANILA, Philippines — The Department of Finance’s (DOF) proposed budget for 2022 is 32.7 percent higher than its funding for this year, Secretary Carlos Dominguez III said Wednesday.

During a hearing of the Senate Committee on Finance, Dominguez said that the proposed budget of the DOF and its attached agencies in 2022 under the prospective general appropriations law increased to P21.2 billion, compared to the P16 billion in 2021.

“For 2022 GAA, the DOF’s proposed budget increased by 32.7 percent to P21.2 billion compared to this year’s appropriations. However, if we compare the proposed 2022 new appropriations to our 2017 budget level, the amount is even one percent lower,” Dominguez noted.

“The increase in next year’s funding will be spent for modernization and digitalization programs to enhance our revenue enforcement capacity. These programs will allow us to effectively raise more funds to finance our pandemic response and economic recovery program,” he added.

According to Dominguez, the increase in next year’s budget is also for the implementation of salary adjustments for public service employees under the salary standardization law.

He assured that there was no wasteful spending at his department.

Dominguez explained that the Bureau of Treasury’s (BTR) budget has the highest increase “because major portions of that will be for national government operations and not for the agency itself.” BTR’s proposed budget for 2022 is P4.2 billion, 95.91 percent higher than the P2.1 billion it had in 2021.

Meanwhile, the Bureau of Internal Revenue (BIR) continues to have the largest budget allocation among the DOF’s attached agencies. BIR’s proposed budget for 2022 is P10.8 billion, 9.28 percent higher than its P9.9 billion budget last year.

At the conclusion of the hearing, Senator Sonny Angara, chair of the Senate Committee on Finance, said they will recommend the proposed budget of the DOF for plenary deliberations.